You're sitting in your seat in a packed theater, nerves building, and that's when you feel the rumble ...

It's your stomach. You ate way too many Sour Patch Kids before this movie started. (Damn, why'd they have to make those new blue ones so good?) The only reason you noticed is because, for the past 20 minutes, you've watched building after building collapse and now you're just sitting there, trying to process what the hell is going on.

And that's your mistake. (Not eating the Sour Patch Kids. Those are delicious.) The mistake is trying to process it.

When it comes to Dwayne "The Rock" Johnson's new movie "San Andreas," don't worry about the plot. It doesn't matter. Don't worry about the science. Seismologists think it's laughable. Don't even worry about the dialogue (except the one-liners -- those are fantastic). Just sit back and enjoy the latest amazing big-screen disaster, which is expected to crush the box office this weekend.

And while you're enjoying it, here are the thoughts and revelations that might cross your mind:

1. Wow, this movie is just like "Taken," but with earthquakes.

Liam Neeson and The Rock both have estranged ex-wives who are dating jerks, they're struggling to foster good relationships with their daughters and they both have very particular sets of skills -- as Ray Gaines, The Rock saves lives and kicks earthquake ass, while Neeson just kicks everyone else's ass.

If you replaced the bad dudes in "Taken" with earthquakes, you're pretty much getting "San Andreas."

2. If there's ever an earthquake, you better hope you're related to The Rock.

There are people dying all over the place in this movie, but does Los Angeles Fire Department rescue vet Gaines care about that? Hell no. He just wants to save his ex-wife Emma (Carla Gugino) and daughter Blake (Alexandra Daddario).

With buildings collapsing everywhere, don't be surprised if you get some childhood flashbacks. Wow, someone is terrible at this game.

4. There's a 90 percent chance this movie was made around one-liners.

With the roadways blocked and nowhere to land, The Rock sets a plane on autopilot to crash into the Pacific Ocean as he and his ex-wife parachute into AT&T Park, most likely just to deliver this line: "It's been a while since I got you to second base."

Boom. We've got a 9.1 on the Playa Scale! Can we give this man an Oscar already?

5. If your dad is in the Los Angeles Search and Rescue, you're automatically a survival expert.

Who needs The Rock when you have his daughter Blake? After the earthquakes start going off, Blake suddenly turns into survival expert Bear Grylls. She's patching wounds and listening to secret radio channels. Why? Her dad's in Los Angeles Search and Rescue, duh. There's no time for any more explanation. There's another earthquake coming!

6. The worst thing you can do in an earthquake is lose a shoe.

The Rock's ex-wife has a new man, Daniel (Ioan Gruffudd), who seems like an all right dude until he loses his shoe. After Blake gets trapped in a parking garage at Daniel's office, he heroically goes for help. Daniel is actually making an effort until part of the ceiling collapses and his shoe comes off. After that, he just leaves. As Blake says later in the movie, what an "asshole."

The moment might not make sense, but it did lead to another great one-liner that The Rock's ex says into Daniel's voicemail: "If you're not already dead, I'm going to fucking kill you." Yikes! Take it easy. The guy just lost a shoe.

7. Thanks for nothing, Paul Giamatti.

Paul Giamatti plays Cal Tech seismologist Lawrence Hayes. Recently, Hayes made a breakthrough and can now predict earthquakes. The only problem is his predictions pretty much happen seconds before the quake. It's like, "Everybody watch out! We're gonna have a [ground shakes] -- er -- never mind." Thanks for the heads up, Paul.

8. The most unrealistic thing is that someone would want to divorce The Rock.

Forget about the historically huge quakes and the killer tsunami. Why the heck would his ex want to divorce The Rock? Yeah, there's some story about how he became distant after one of the couple's daughters died, but get real. There are tons of people who die in this movie, and all of their last thoughts are probably, "What the heck was his ex-wife thinking?"

9. Wait, we take that back. The most unrealistic thing is that kiss. 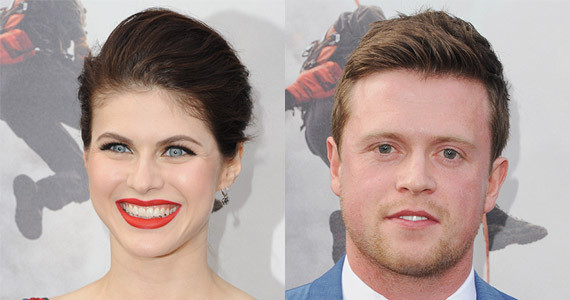 The Rock's daughter Blake meets this British guy named Ben (Hugo Johnstone-Burt) and his brother Ollie (Art Parkinson). Ben and Ollie save Blake from getting crushed in a car at the last second, but besides that Ben doesn't really do much interesting. Then, after he gets some glass in his leg, Blake is patching him up and they kiss. What?

Where were you on that prediction, Paul Giamatti? In Giamatti's voice: "Everybody watch out! They're about to kiss -- er -- never mind."

The most interesting thing Ben says is when he asks Blake why she wears two necklaces. The answer? Because the second belonged to her dead sister. Ouch. You almost feel bad for Ben. Wait, no you don't. He just kissed Alexandra Daddario. Just wait 'til The Rock hears about this. A quake is the least of this guy's worries.

At the end of the movie, The Rock sees an American flag and says it's time to rebuild. But in your head, he's breaking his cast again in "Furious 7." Those earthquakes will think twice before coming back for sure.