A recent guide from The National School Board Association (NSBA) on how to ensure student success includes an explainer on the reasons why students often leave school before graduating. According to the guide –- as well as various reports from the U.S. Department of Education and the Discipline Disparities Research-to-Practice Collaborative -- one of the factors that can contribute to student disengagement are disciplinary disparities that lead to higher suspension rates for students of color and students with disabilities.

But a graphic from the NSBA report really drives the point home.

As shown in the graphic below, which is based on data from the 2011 – 2012 school year, one out of 5 African-American students were suspended from school at least once, as compared to one out of 50 Asian-Americans.

Let us know what you think in the comments section. 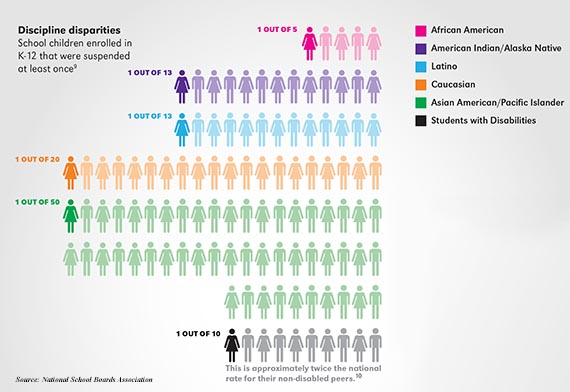