When you take a commercial flight there are all sorts of things that you're not allowed to do. The majority of which seem enormously superficial, considering everyone onboard has already consented to launching themselves into the sky in a big metal box. Besides, who wants to be careful opening the overhead compartments when you can watch the universe expanding and contracting outside your window.

I experienced no such conflict of interests, however, flying in Dutch explorer Max Ammer's homemade experimental sea plane this morning. All I had to do was read the dials and pull the wing flap lever up and down as he bellowed at me through the headset. After that, it was just a case of trying to complete the job at hand without falling out. 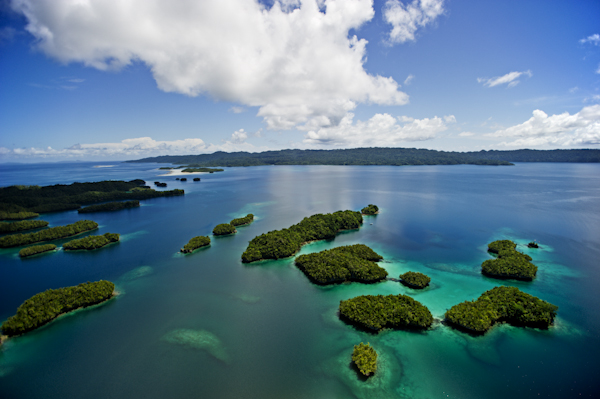 Kabui Bay is a spectacular lagoon in Raja Ampat, off the north west coast of the island of New Guinea. Its crystal clear waters and dramatic coastline lie at the heart of the Coral Triangle's biodiversity. This protected stretch of ocean is an essential breeding ground for the area, populating fish stocks and feeding dolphins, rays and dugongs as they travel up the coast.

But recently, roads have begun snaking their way around the bay sending thick red sediment running into the ocean. 'They're crazy' Max tells me through the headset, 'these roads don't even go anywhere'. And he's right. We fly low along one road that starts at a tiny village on the coast, it snakes inland for about 2 miles and then abruptly stops. The other irony, of course, is that people live in small stilt houses over the water -- there are no cars in the village. Or anywhere near for that matter. People here travel by boat, or they walk. 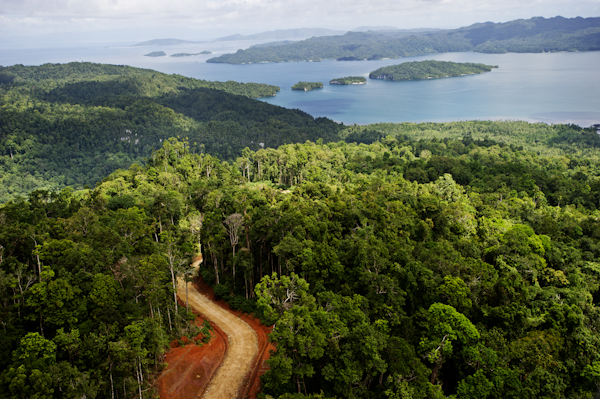 A new and completely unusable road snakes down towards Kabui Bay, Raja Ampat

As Max takes me along the east coast of the bay, I can see where the ocean is stained red, and where the current is dragging the sediment further out into the open ocean. The coastal corals here have already been suffocated he tells me. I saw Kabui Bay from underwater when I was working here about two years ago, and the knowledge that some of those coral gardens are gone leaves me feeling helpless. 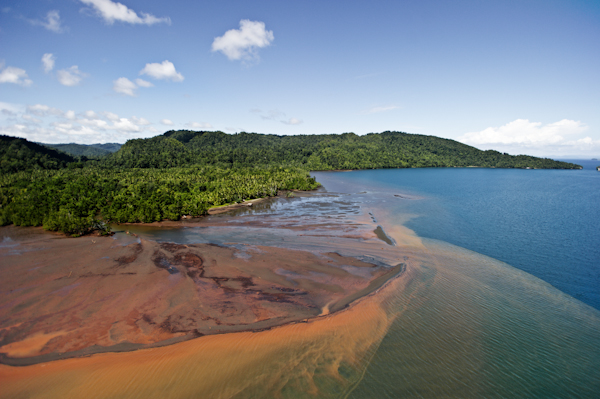 Max brings the plane down between two reefs in front of Kri Island, he's visibly angry at what we've just seen. Max has lived in Raja Ampat for almost 20 years and he relies on its spectacular natural beauty for some kind of spiritual sustenance. But he's not the only one, there are 87 villages scattered throughout the region all of whom depend directly on the continuing abundance of the area's reefs and oceans.

For more information on The Coral Triangle, its wonders and horrors, please visit my website.