What is it about standing in line for food that brings out the DMV in people? This holiday season, whether you're (smart and) eating out at a restaurant, serving the hearty meal in your own home, or partaking in the holiday at someone else's house, chances are the scene will not resemble a Norman Rockwell painting. People will be getting up from the main table to obtain food from what we call a "buffet."

We do know this is pronounced buffay, correct? It's not spoken like a line from a famous nursery rhyme. "Little Miss Muffet sat on a Tuffet to eat at a buffet!" Right?

Not that we've cleared up the French influence on our language, you're in luck! I have some advice to offer about buffets that you've likely never heard before.

But first a little lesson on the types of individuals you are likely to encounter at a buffet:

A Buffeter Surveyer -- These are people who have read "helpful" articles with tips about losing weight during Thanksgiving and Christmas and have conspicuously edged closer to peruse the offerings in their entire glory prior to making their careful selections. They have been promised that if they have a calm, relaxed demeanor and a predetermined game plan approaching the buffet, they will not gain five pounds. Most of these people will methodically walk the length of the buffet before diving in head first. It's best to back up and give them a running start. Note: If you've read the same articles, it's far too late to remind them that using a salad size plate instead of entree size can fool the eye and trick the stomach.

A Buffeter Overstayer -- They think of the buffet as their home base. They will linger around, integrating all kinds of tasks into the buffet. Talking, eating, wiping, consulting, organizing, refilling, and generally becoming a permanent fixture at a buffet. They are not compatible with the next type...

A Buffeter Get-Out-of-My-Wayer! -- He means business. Napkin tucked, first in line, and making appreciative sounds that make you wonder if a nearby barnyard has taken attendance recently.

A Buffeter Prayer Sayer -- A religious woman who's extremely graceful. Literally. She makes sure grace has been said in all languages, all cultures, as she prays for starving people everywhere. Very thoughtful too -- if there are leftovers she will pack a doggy-bag for God.

A Buffeter Cabareter -- Usually a former preschool teacher who know lots of songs and won't hesitate to coerce people in line to join in with "Ten Little Indians" or "Pumpkin Pie in the Sky!" And you better at least lip synch when she divides you up into sections for her round of "Gobble, Bobble, Wobble" or she'll belt it all out on her own.

A Buffeter Weigher -- Such a killjoy. They recite calorie counts for everything and whip out their little kitchen scales to do an official cranberry calibration.

A Buffeter Layerer -- This person is obsessed with rearranging the sumptuous spread and digging through layers of turkey or yams looking for who knows what. Tongs are their favorite tool of choice but they can function just as well with a spatula too.

A Buffeter Sprayer -- It would be less offensive if this person was merely having an allergy attack. But that's usually not the case. Need I say more? I needn't.

A Buffeter Okayer --You'll not meet a more pleasant, jovial person in the line tomorrow. The answers to the following questions will always be "Okay!" 1. Can I go in front of you? 2. How've you been since last Christmas? 3. Do you think I should help myself to goosing cousin Cindy as she helps herself to some goose?

A Buffeter Trayer -- They frequent cruise ships and Las Vegas so they are professionals and bring their own tray. It looks suspiciously like the one at Soup Plantation. But it helps them with efficiency because balancing full plates is really not their thing.

A Buffeter Bouqueter -- These are gardening people and if the hostess has thoughtfully decorated with floral centerpieces, that's all they will talk about. You'd think they would prefer Roasted pale pink Roses or Fried Fuschia Freesia to light or dark turkey parts.

A Buffeter Betrayer -- Intimately acquainted with the hostess, they won't hesitate to tell all they know. "That salad she claims is organic? Nope. And it's a Costco pumpkin pie this year. Skip the sweet potatoes, she doesn't wash the skins." Etc.

A Buffeter Clichér -- This guy's vocabulary is stuffed fuller than the turkey with stupid puns and double entendres. While staring at the carved bird, he's bound to remark, "Looks scary... It's a Goblin!" Or "I'm suddenly in a fowl mood!" Tell him you gave up laughing at stupid jokes "cold turkey" and move along.

A Buffeter Halfwayer -- They nearly get to the end of the food display when they realize they forgot to grab a ladle full of salad dressing some twelve platters ago. Now they're gonna stand frozen and flummoxed in line, wondering how they can politely go backwards. Say this, "Grandma, want me to get you some ranch?" Problem solved.

A Buffeter FoulPlayer -- If it's accidental, it can be forgiven -- but younger buffet-goers will drop a cherry tomato into the gravy to see if it floats or sinks. That's just the beginning of the havoc they can wreak and I hesitate to offer more examples lest I give them other ideas.

A Buffeter OyVeyer -- Being Jewish, I've met more than my share. Starts with, "Oy vey, my doctor says my triglycerides are sky-high lately." Ask them what a triglyceride is and they'll just sigh deeply and say, "Oy vey, I really shouldn't be eating this," or worse, "oy vey, should YOU really be eating that??"

A Buffeter Essayer -- Someone who goes around observing and interviewing people in line at buffets in the hopes of writing a funny Huffington Blog post because she has nothing better to put out. The nerve.

A Jimmy Buffetter Buffeter -- Related to the Buffeter Cabareter (above) but you'll truly be impressed with how much of the "Wasting Away in Margaritaville" lyrics they actually know. "Searchin' for my lost shaker of salt. Some people claim that there's a woman to blame, but I know, it's my own damn fault" is only the beginning! 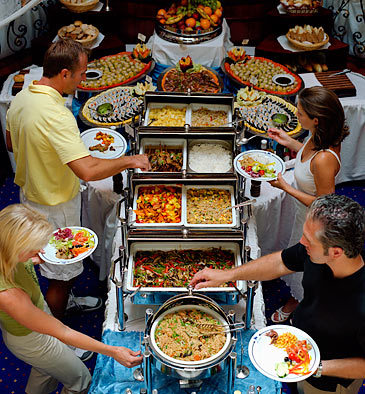 That blonde in the lower left is about to get her fingers slammed in the chafing dish lid. Not just chaffed, SLAMMED!


And now for some quick rules. Just a few though, because everyone knows the rule is "there's no rules at family gatherings!"

Don't Go Astray and Disobey the Array of the Display at the Buffet!
(The 10 commandments)

1. Thou Shalt Not Cut the Line -- I know, I know... you just want seconds on the corned beef and hash. But isn't that a different holiday food anyhow?

2. Thou Shalt Not Switch Direction: Buffets go in one direction only. Don't start making your way through the line from the opposite direction. A big hint is you will find yourself carrying food in your hands because the plates are on the other side.

3. Thou Shalt Watch Thy Children: Always escort young children, say 10 or younger, to the buffet. And give them second helpings of the creamed spinach in the hopes that one of the ingredients is Valium or Xanax.

4. Thou Shalt Keep Thy Fingers to Thyself: Kids aren't the only offenders here. Adults are just as likely to get excited and grab something quickly because nobody is looking. I see you. I always see you.

5. Thou Shalt Not Move Tongs: Never, ever move the tongs from one platter or hot food station to another. What if the person behind you has allergies to shrimp and you've just moved the tongs from a shrimp dish to a chicken dish? What if that person is kosher or vegetarian? Ever think of that you "Tong Trader" you? Need a gentle reminder? Hum the "It's just Wrong to move a Tong" song. Don't know that one? Make friends with the preschool teacher who sings in buffet lines mentioned above.

6. Thou Shalt Not Eat in Line: It's amazing how many people you run into who are suddenly extremely diabetic or hypoglycemic and must have their food right NOW at a buffet.

7. Thou Shalt Not Take More Than Thou Can Eat: Buffet dining, by its very nature, is gluttonous, but that doesn't mean you have to be! "If you're a glutton with the mutton, you'll need to move your shirt button! La, la, la, la!" Okay, so I dine with a certain preschool teacher quite often! Similarly, don't take the last piece of something because it's rude to leave the people behind you with an empty serving tray. If you do, stealthily stick up a little sign that says, "Kilroy was here" so they can at least laugh at their ill-fortune.

8. Thou Shalt Use a New Plate Each Time: If you go back for seconds, leave your original plate at the table and get a fresh one each time. Why this is, I'll never know . . . but I get admonished for it all the time. (Perhaps a hygiene specialist can elaborate on how this can result in cross-contamination in the comments section?)

9. Thou Shalt Wash Thy Hands: Sticking with the cleanliness theme, always wash your hands before getting in the buffet line. You might not be touching the food directly, but you will be handling the serving utensils. And I actually GET this one, so no explaining in the comments section is necessary, you germaphobes.)

10. Thou Shalt Not Make a Doggie Bag: Don't even think to ask. There are no doggie bags at buffets, no exceptions. A napkin squirreled quickly away inside your purse will always suffice. Men without handbags are outa luck and will need to be super nice to their wives for leftovers back home. 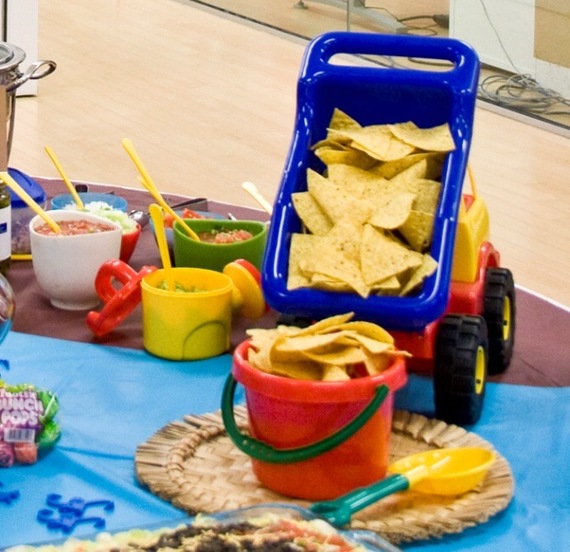 It was not beyond me to do this at a buffet. Yes, food was served inside wagons, dump-trucks, watering cans, pails and eaten with shovels. Rest easy, it was for a kid's party!