Sinead O'Connor has split from her new husband, ending her marriage only 18 days after she and Barry Herridge tied the knot in Las Vegas last month.

O'Connor took to her website Monday to announce the split writing,

"He is a wonderful man. I love him very much. I'm sorry I'm not a more regular woman. I truly believe though it is painful to admit, we made a mistake rushing into getting married, for altruistic reasons, and weren't aware or prepared for the consequences on my husband's life and the lives of those close to him. He has been terribly unhappy and I have therefore ended the marriage. I think he is too nice to do so. And too nice to trap."

O'Connor goes on to say that the marriage was practically doomed from the beginning. She explains, "Within 3 hours of the ceremony being over the marriage was kyboshed by the behaviour of certain people in my husband's life." She faults herself as well, saying, "And also by a bit of a wild ride i took us on looking for a bit of a smoke of weed for me wedding night as I don't drink."

This wedding night confession continues, as does O'Connor's finger pointing. She calls out the people in her soon-to-be ex-husband's life who may not enjoy the singer's lifestyle. "I saw his life leave him because of how people close to him reacted. And I can't take anyone's life. And a woman wants to be a joy to her husband. So.. U love someone? Set them free."

In the December 8th ceremony at the famous Little White Chapel in Las Vegas, she and Herridge said their "I Do's" in a pink Cadillac at the drive thru window. Sadly, the marriage lasted only 18 days, but as she writes in her note to fans on her website, at least she "Got married in Vegas in a pink Cadillac! Can't get more Rock n Roll than that."

O'Connor reemerged over the summer with blunt bangs and dark locks, but returned to her signature shaved head, back in October. Ending her post about the split, O'Connor promises to continue being herself, writing, "Meanwhile I intend to get on with being fully me. With never an apology for ANY part if being FULLY ME."

Head over to O'Connor's website for her full note to fans and take a look at the photos from the Vegas nuptials below. 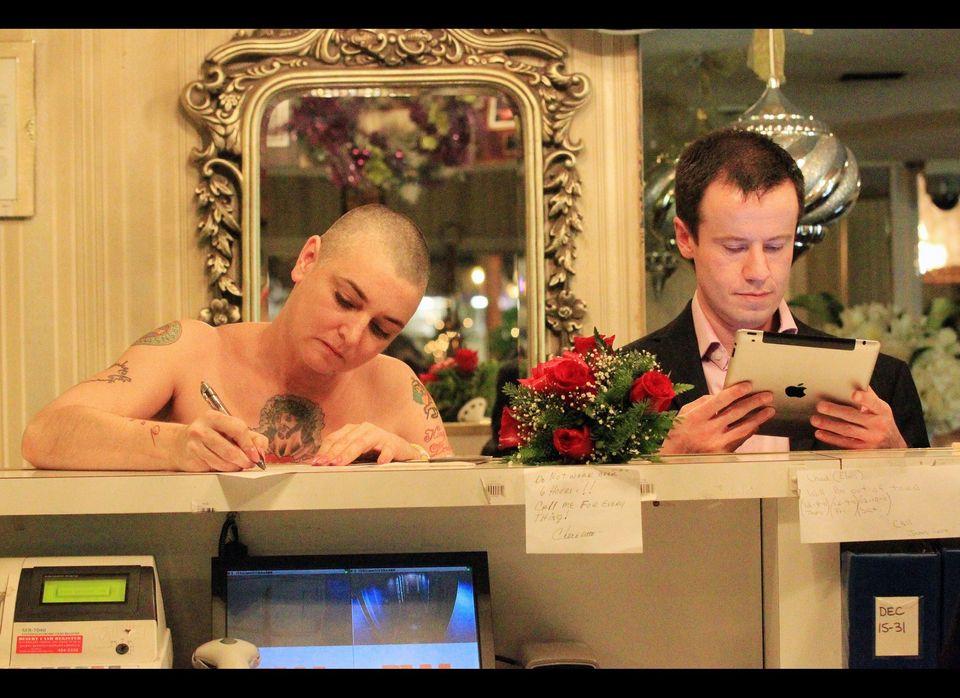