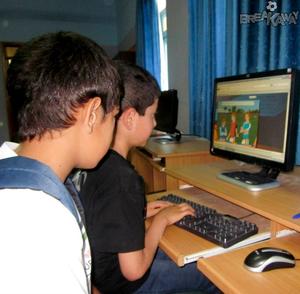 During the 2010 FIFA World Cup in South Africa, an innovative, serial-based soccer video game debuted with the objective of reducing violence against women and girls. At present day, ironically amidst threats of violence at the 2014 FIFA World Cup in Brazil, the game, called “BREAKAWAY,” has been proven in a research study to be an effective, transformative tool to address the rampant problem of violence against women, primarily targeted for and played by boys ages 8-15 around the world.

BREAKAWAY was developed by Champlain College Emergent Media Center (EMC) students with the support of behavior change experts at the Shelburne, Vt.-based Population Media Center (PMC) and the United Nations Population Fund (UNFPA). PMC is the leading authority in using the Sabido methodology for social and behavioral change using radio and television dramas around the globe. The game was researched and developed by more than 110 Champlain College students from a wide array of majors since 2008. Since the online debut of the game in June 2010, BREAKAWAY has reached youth in more than 180 countries, and a newly conducted impact study confirms that it works to change the mindset and behaviors of young boys. 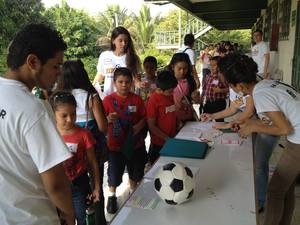 Champlain College’s EMC worked closely with research partner Dr. Hua (Helen) Wang at the University at Buffalo, The State University of New York, to design and evaluate the impact of BREAKAWAY at youth camps in El Salvador in November 2013. The study, funded by the Champlain College President’s Cabinet, showed that it does help to reduce prejudice and violence against women and girls.

Dr. Wang has published research on the use of entertainment-education strategy for health promotion and social change, including serious games and the Sabido Methodology - a theory based on media design and production methodology upon which the BREAKAWAY game was designed. Dr. Wang's research team has helped create innovative assessment tools using participatory sketching, photovoice, and event-based time diary to capture the impact of BREAKAWAY during the camps in El Salvador.

In the online soccer game, players confront challenging situations modeled after real-world examples of violence and bullying balanced by sportsmanship and teamwork. By guiding the main characters and selecting their dialogues through the scenarios, camp participants aged 7-18 formed understandings of the good qualities of sportsmanship, debated about the rationale of different decision-making processes, wrote individual letters to the abusive characters, and co-crafted RESPECT poems/rap songs. They showed empathy to the characters that were mistreated in the game episodes and admiration for the positive role models. Additionally, they sketched out real-life bullying scenarios, demonstrating some of the strategies they learned from the game and camp activities.

“BREAKAWAY offers youth the chance to discover how to become a champion both on and off the field. The game offers an engaging and fun way to develop successful intrapersonal skills,” explained Ann DeMarle, director of Champlain College’s EMC. “This study confirms that games can be, and BREAKAWAY in particular is, effective at changing attitudes and behavior in regards to some of our most serious global problems.”

In 2013, the BREAKAWAY team joined with the United Nations Development Programme and the University of Sonsonate to host two youth camps in western El Salvador based off of a model used in the summer of 2012 in Palestine. Local university students were trained as facilitators to lead young campers through gameplay, discussions, worksheets and interactive activities to evaluate the game. 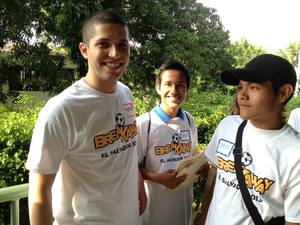 Extraordinarily, in 2012, Palestinian youth played co-ed soccer for the first time. "We [the facilitators] were able to see the children have a better understanding of gender rights and why girls have the right to play and be equal as boys. We had never before seen this kind of discussion taking place among children and teenagers,” said Mahmoud Jabari, a Champlain College communications student from Palestine who led the first BREAKAWAY international camp trip. "By concluding this project, we record Hebron as the first city in the Arab World to receive and implement this educational game that conveys a universal message and is designed to raise awareness about the issue of violence against women," Jabari continued. Through three camps, 300 Palestinian children were exposed to BREAKAWAY.

Upon learning of Jabari's success of initiating the BREAKAWAY summer camp model in his home community of Hebron, Palestine, graphic design student and EMC student employee Mariana Herrera knew she wanted to bring BREAKAWAY camps to El Salvador. Herrera, a native of El Salvador, states that she wanted "to bring BREAKAWAY camps to El Salvador because it is a project that takes video games, a medium that kids love but often portray violence, and instead use them to shape attitudes and actions to end violence, particularly violence against women and girls." In addition, El Salvador has one of the highest per capita rates of femicide in the world.

Much like the successful Hebron camp model a year prior, where facilitators used the game to engage youth in deeper conversation around the issue of violence against women and girls, the cohort of undergraduate and graduate students, faculty, staff and alumni from Champlain College assisted Herrera in conducting facilitator trainings to 40+ volunteers and lead camps for 60 children in Sonsonate, a western region of El Salvador.

Herrera expressed, "The BREAKAWAY camp format makes addressing the sensitive issues that comprise gender-based violence approachable for young people. We combine technology with group activities and facilitated discussions in an exciting and creative manner attractive to young people. Many of the children we worked with don't have easy access to computers or game consoles. This was an opportunity for them to be exposed to this fun technology in an environment that encourages positive behavior in a culture marked by gender inequality and violence." 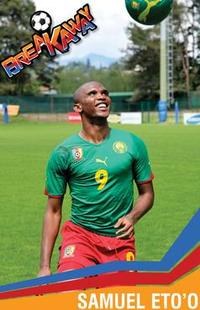 In the early stages of research, students traveled to Cape Town, South Africa, and St. Lucia to study how best to tailor a game toward youth on a global level. At this time, the ground-breaking game project called upon world-famous soccer star Samuel Eto’o of Cameroon – striker for the Football Club Internazionale Milano – who joined the project as a celebrity spokesman and spent a day in May 2010 working with Champlain College students and faculty from the EMC and representatives from the United Nations in Milan, Italy. You can find Eto’o incorporated in the game narrative as an animated in-game character.

The study conducted by Dr. Wang, with help of the BREAKAWAY team in El Salvador, found that based on a five-star rating scale, on average, participants rated the camp experience 4.92, facilitators 4.66, and other campers 4.66. Participants claimed, “The camp is the best thing that has happened to me;” they learned that “the abuse of women is bad,” and to “not react to violent situations in a violent way because it can make things worse, so it is best to remain calm.” They reported that BREAKAWAY changed them in many ways. One said, “It opened my mind that girls can do the same things as boys.” Another said, “BREAKAWAY changed me morally in terms of respect to others.” Participants’ awareness and attitudes not only changed, but some also indicated their behavioral change. For example, they are now more frequently playing alongside girls. Additional insights for the study were obtained from the BREAKAWAY Facebook page during and after the camps.

Through its success, the BREAKAWAY team is planning to offer international camps at more locations throughout the world. A multilingual Facilitator's Guide, released in early 2013, provides educators or coaches with the specific tools to delve deeper into the issues addressed in the video game, where players must make critical decisions throughout the story related to gender equality, violence against women and girls, bullying and more. The BREAKAWAY Game & Toolkit, available in English, French, Spanish, and Portuguese, are available for play and download at http://www.breakawaygame.com.