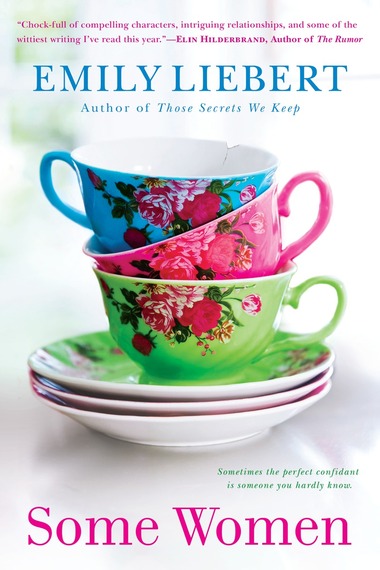 On the heels of the release of my new novel, SOME WOMEN, I have a confession to make. Until two years ago, I hadn't exercised in over a decade. And then, at 38, I caught a glimpse of my reflection in the glass exterior of a store front. I was flailing my arms, as I so often do when I'm recounting a story, and there it was. My loose skin flapping in the wind. Upon further examination, in the privacy of my own bathroom, I noticed that my thighs were no longer toned and taut the way they'd once been.

Now, let me be clear about one thing. Overall, I have a very healthy body image. And I don't believe in corporal perfection--no matter your age. That said, I knew it was time for me to get my rear into gear, so to speak.

Enter Pure Barre--a combination of yoga, Pilates, and ballet. After one class I was hooked. And a year later, I decided to become a certified barre teacher! But sculpting my physique wasn't the only benefit to barre; I also met some solid friends. We'd work out together and then head to the café next door after class to hash out whatever it was that was going on in our lives on any given day. Kids, husbands, professional deadlines. You name it, we covered it. That's where the nugget of an idea for my new novel SOME WOMEN was formed.

At the beginning of the book, the three main characters--Annabel, Piper, and Mackenzie barely know each other. In fact, Annabel and Mackenzie have never met. Ultimately, they're brought together by a barre class. Beyond that, I knew I wanted to focus on three strong, yet very different women, each of whom was confronted with a major life-altering change, and a shocking one at that.

Annabel, for example, has everything under control--devoting her time to her twin five-year-old boys and to keeping her household running seamlessly. So when her husband of a decade announces that he's leaving her, without warning, she's blindsided.

Single mother Piper has always done her best to balance it all--raising her daughter Fern by herself and advancing her career as a crime reporter. Only now that she's finally met the man of her dreams, Fern's absentee father arrives on the scene and throws everything into a tailspin.

Mackenzie is married to the heir of a thriving media conglomerate and has many reasons to count her blessings. But with an imperious mother-in-law--who's also her boss--and a husband with whom she can no longer seem to connect, something has to give.

On the surface, these three women may not have much in common. Yet when their lives are thrust together and unlikely friendships are formed--at a time when they all need someone to lean on--Annabel, Piper, and Mackenzie band together to help each other navigate their new realities.

As for the location, it's no coincidence that Eastport is strikingly similar to Westport, CT--where I live. I write what I know. So, yes, there are certainly common themes in the overall culture and some of the stereotypes, but they're not necessarily one and the same. Along those lines, the main characters are not wholly based on anyone specific, but there are always aspects of my characters that have been inspired by my friends, family, and often people I don't particularly care for! I've been known to say things like, "Watch out or you'll be the villain in my next novel!" But I'll never tell...