Janmashtami is the celebration of Sri Krishna's birthday, the man who is the eighth Avatar (representation) of Vishnu, meaning the facet of creator that manages the preservation aspect of life.

Hinduism sees God in three broad categories: Brahma, Vishnu and Shiva. Brahma reflects the creator form of God, and Vishnu represents the preserver aspect of creation that inspires one to be righteous, and Shiva brings a finite ending to life. It is a part of the life cycle: every human is born, lives on and finally disintegrates. Much of Hindu philosophy revolves around the preservation aspect of life; two of the most common and well known reflections are in the persona of Lord Krishna and Lord Rama. Most people including some Hindus see this as Multiple Gods. It isn't. It's the same God seen in different lights.

The Hare Krishna devotees prefer to call it the "appearance celebration" of Prabhu (Krishna) rather than the birthday celebration.

The celebration of Janmashtami honors the man who gave us so much wisdom in the Bhagvad Gita. The holy book is an encapsulation of Krishna's advice to Arjuna when he goes through different phases of thoughts and actions. It is one of the best self improvement books to read. The dialogue is set in a battlefield as allegory of human struggles within the span of daily living.

The preservation aspect of life is built-in. Every piece of material is created to seek its own balance, and so is every human life. The balance is represented by living in equilibrium, without fear, without apprehension or discomfort.

Universe as a spiritual body is no exception and it comes up in Bhagvad Gita: "Whenever the balance of the universe is disturbed by external interference from any of its parts, then I reveal myself as the Power of eternal balancing. For the protection of those who are in harmony, and the rectification of everything disharmonious, I incarnate myself at every juncture of time." So, it is assumed that the form of God will return back on earth for the establishment of peace, religion and prosperity in society once again when required. 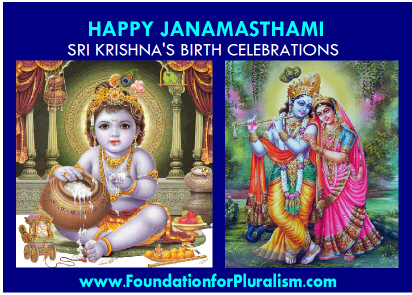 The other version of the same quote is, "Whenever Adharma (un-righteousness) takes root in the society, God will infuse himself and restores the dharma (righteousness) to the society. In other words the operative word is the self balancing mechanism.

To honor Sri Krishna, one of my mentors, I will read my Bhagvad Gita. The Quran says, to every nation and every community and tribe, God has sent a prophet, messenger, peace maker or a balancer (one who restores righteousness) and I believe that Sri Krishna is God sent to restore peace and balance in the society, and of course, every one of us is God sent. And on this birth day, I salute him and thank him for sharing and giving the wisdom of Bhagvad Gita to humanity.

Just a side note, whether it is the Bible, Quran, Gita, Avesta, Torah, Guru Granth Sahib or any holy book, it is for the whole humanity -- and not exclusively for Christians, Muslims, Hindus, Zoroastrians, Jews, Sikhs or others, respectively.

The wisdom to live a better life is in all these books. We have to clean up our hearts and minds to see it. We should not fear that by acknowledging the greatness of other books diminishes the greatness of my own. Nonsense. All are God's goodness and guidance for building cohesive societies where no human has to live in apprehension or fear of the other. If you don't see the wisdom, keep reading until you get it. It is there.

Indeed, my life is greatly influenced and affected by a single verse from Bhagvad Gita: "Finding the truth is one's own responsibility." I owe my critical thinking to this verse, and I owe my return to Islam to this verse; it is very dear to me and there is not a week that goes by without quoting this truth in one context or the other. As I am writing this, I recall the famous couplet from a song by Sahir Ludhanavi in Urdu/Hindi language. It is one of the most powerful interfaith couplets I have read and often think about it and sing that song.

Your religiosity and your righteousness in incomplete without Quran

and most certainly your worship place is incomplete without Gita.

India has a long history of pluralism and diversity. It is one of the oldest nations on the earth that has welcomed every one that was persecuted elsewhere; and those who found the freedom to be themselves such as Jews, Christians, Muslims, Zoroastrians and others, besides giving birth to Hinduism, Buddhism, Jainism an Sikhism, it is indeed home to one of the top five Baha'i shrines in the world.

If you are a good Hindu, then you are automatically a good Muslim, good Baha'i or a good Christian. If you are a good Jew, then you automatically are a good Buddhist, Jain, Sikh, Wicca, Zoroastrian or follower of the native traditions. Essentially, religion and the rituals lift you up to become boundless, universal and God-like, where distinctions of color, religion, ethnicity and race fade. You feel a sense of relief and freedom. Bhagavad Gita says, the whole world is one family, just as every religious text calls out loud to be one universe and one world.

Perhaps this is what Krishna meant, "Surrender to me"; and Jesus meant, "Follow me"; and the Quraan asks to "submit to the will of God." Urging and goading us to become like God, to be free to be a part of the ocean and yet have out unique identity as a human, as a follower of one tradition or the other, live in one geographical zone or the other and born with one skin color or the other.

The other Shloka (verse) Shri DD Maini shares with me frequently is: Do your work, and don't look for the fruit, Kaam kiye ja kiye ja -- omething very reflective of Buddha's teachings.

When I was a baby, I was dressed up as Krishna and a matka (clay pot) with makhan (butter) was placed in front me and apparently I did just like Sri Krishna did with the makhan: ate it all with bare hand. My pictures were in many homes, I have to go find them -- after 60 years! That's how old I am now.

I visited Brindavan, the birth place of Sri Krishna and it was very inspiring to think about the man who changed so many lives, and I was privileged to see that place where he was born. Sri Krishna is one my mentors and inspirations in life and I hope to learn a lot from reading about him.

Indeed, one of the best teachers in Bhagvad Gita in Dallas is Swami Nityananda Prabhu at the Hare Krishna Temple. He shares the pluralistic vision of the Sri Krishna. He and I reviewed the whole Bhagvad Gita on my radio show in about two years, every Thursday of the week, where we learned the wisdom of a religion, every beautiful religion, and every day in the morning.

Today, I am a Muslim because of Bhagvad Gita, and I have written extensively about it and have recorded on several videos, one of them in this video, forward it to 6:50 minutes. It is also mentioned somewhere in this video.

God in Quraan has said that he has sent a messenger to every nation, every community and tribe to restore righteousness in that society. I am pleased to pay my respects to one of my mentors Sri Krishna today. I continue to learn and emulate a fraction of wisdom from Krishna, Jesus, Buddha, Muhammad, Nanak, in particular, and many in general, including Bahaullah, Ali, Mahatma Gandhi, Martin Luther King, Aga Khan, Rev. Moon and Obama. No confusion, I am a Muslim and I do not worship any one except the invisible, formless creative cosmic energy called God by different names.

Please go get yourselves a copy of Bhagvad Gita by Chinmaya Mission or the Hare Krishna temple and a copy of the Quran, translated by Mohammad Asad -- and if you have the money to buy the Torah, Bible, Gurugranth Sahib, the Kitab al-Muqaddas and other holy books. it is a gift to yourselves to enrich with the spiritualiy. Read the books as God's guidance for us to live in harmony, honoring the uniqueness of each other. All the books are pluralistic, have the mind set to see it.

Some of my favorite Krishna songs: