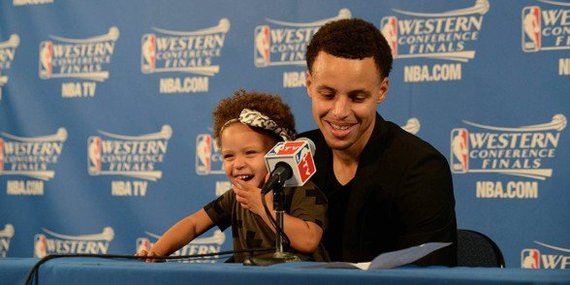 Sometime well past my son's bedtime, baby-faced Steph Curry stepped up to the podium with a baby-faced companion.  The only difference between the two was that one was 27, and the other was 2.

We could spend all day talking about the media's reaction and the supposed disrespect to the "sanctity of the post-game" as one journalist put it. But let's not.

Instead, we can talk about how in the face of so many commentators blaming the civil unrest around our country on absentee fathers, one father chose to spend what little time he has away from his job, with his daughter.

Instead of asking why Curry brought his daughter to the post game interview, we should be asking why don't more players do the same?

According to the National Fatherhood Initiative, a study involving 134 children of adolescent mothers examining father involvement over the first 10 years of life, researchers found that father-child contact was associated with better socio-emotional and academic functioning. The results indicated that children with more involved fathers experienced fewer behavioral problems and scored higher on reading achievement.

This is not an attack on the single mothers who wear both hats and sacrifice their life for the betterment of the children.  I have lived in that household, and I am a success because of the hard work my mom put in to make sure my sister and I had everything a kid could dream.  What we are talking about is every second either parent uses to spend with their child is a step to a better life for that child.

Two years ago, as I held my son in my arms for the first time, something clicked.  I couldn't care less about anything outside of my family.  I would sacrifice it all to make sure my family stayed healthy, happy and intact.  I don't care what you think about my professionalism, I don't care what you say about my parenting.  My wife and I decided long time ago we are going to do what's best for our child, and while I thank you for your opinion, you're not going to affect the way I raise him.

If I was in the position of Curry, away for my family for days sometimes months, any chance I got to hold my son, I would do it.  In the shower, at the grocery store, at the DMV, any place, any time when I needed those little arms to wrap around my shoulders and his warm sweet breath to tickle my neck, damn to all of you.

I understand people have a job to do.  I understand that sometimes a kid can be a nuisance.  Your job, however, is to get the story.  You have spent your career taking canned cliches and making them somewhat enticing.  You can jump over the hurdle of a cute 2-year-old playing hide and seek under the podium.

I wish more professional players brought their kids to these pressers.  I wish more reporters, instead of complaining about not getting the quotes needed to produce a story, change the narrative and do a story on players making the most of their time with their children.

And for the love of everything cute and cuddly, those kids are, how do i say it, adorbs.