Stephen Wiltshire spoke his first words, 'pencil' and 'paper' at five years old. At the age of eight, the late British Prime Minister Edward Heath commissioned Wiltshire to draw the Salisbury Cathedral. At 11 years old Wiltshire drew a perfect, intensely detailed picture of the London cityscape after a single helicopter ride. Perhaps it is not surprising that Wiltshire was diagnosed with autism when he was three years old.

Wiltshire is a gifted artist with a truly unbelievable ability to render a city from memory after seeing it only once. He has since visited and drawn Venice, Amsterdam, Moscow, Tokyo, Chicago, Los Angeles and other international destinations.

Watch an unbelievable clip of Wiltshire drawing Tokyo from memory:

Each one of Wiltshire's accomplishments is more astounding than the last. He drew a 30 foot picture of Hong Kong's Victoria Harbor after a mere 20-minute helicopter ride... In three hours of drawing he was able to capture four square miles of London, and these two examples . Wiltshire currently has a permanent gallery in London and is enjoying international acclaim as an artist.

We asked Wiltshire a few questions about his work:

SW: I like cityscapes, street scenes and aerial views of modern cities and my favourite artist is Richard Estes. His paintings are just like the real thing. I like the people, busy traffic, rush hour, skyscrapers and avenues, I think these are all very exciting.

HP: Was there a moment when you decided you wanted to become an artist?

SW: I started drawing when I was five years old. When I was a young boy drawing made me feel calm and happy. I kept practicing and my drawing always got better. I wanted to keep going and do the best I could. I am very proud of my work.

HP: What is the biggest challenge you face as an artist?

The large panoramas are very hard work, they take many days to finish, there is lot of detail and information and can be tiring. I travel to lots of places and I really enjoy visiting new cities. I have a lot of new ideas and I draw them in my sketchbook first. Sometimes, I draw them on a large piece of paper later.

HP: What is your favorite city?

SW: My favourite city is New York; I have been there lots of times.

See a slideshow of Wiltshire's work below, and let us know what you think in the comments section!

Art and Autism: Art therapy can be a beneficial treatment for individuals with autism and related disabilities. The arts can help autistic children express themselves and interact with others, as it did in Stephen's case. You can hear more about it in the Studio 360 link here. 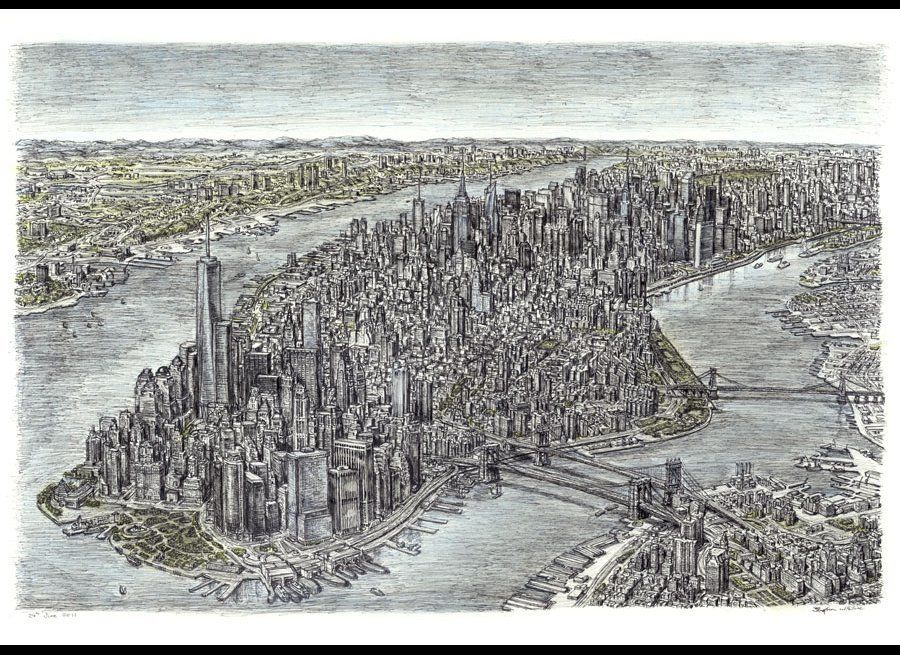