According to the Chinese Zodiac calendar we are in the Year of the Dragon. Which is very serendipitous considering that China made conservation headlines last week with its announcement to prohibit serving shark fin soup at all official state banquets. The soaring demand for shark fin soup, seen as a luxury in China, has been linked to the global decline in shark populations, some of which have been reduced nearly to extinction. Last year alone, Hong Kong imported 22.7 million pounds of shark fin products. China's declaration signals a huge cultural shift and a significant step in the right direction for shark conservation.

The connection between declining shark populations and finning is tragically clear. Each year, up to 73 million sharks are stripped of their fins and thrown back to the ocean to die a painful and prolonged death. This is equal to over eight thousand sharks killed every hour.

Think about this for a moment, in the time that it takes you to read this post hundreds of sharks will have been killed.

This is beyond unsustainable. As illustrated by this graphic (created by Josh Aggars) the impact of finning on shark populations has definitely taken its toll. 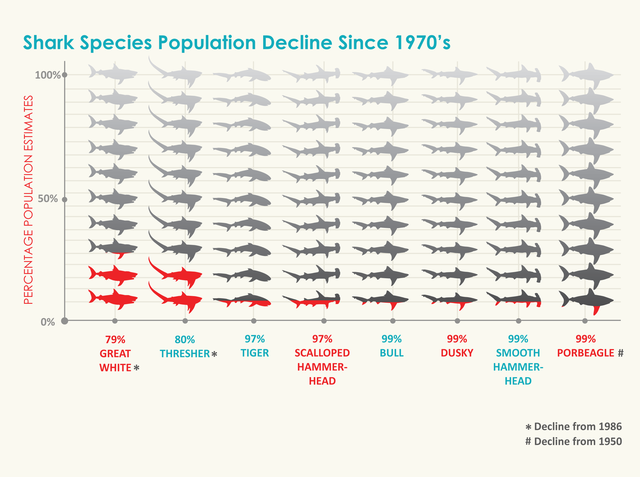 You can quite easily equate sharks to dragons, as it pertains to the cultural attributes offered in the Chinese Zodiac. Dragons are described as deliverers of good fortune and a master of authority; they signify luck and are to be honored and respected.

The comparisons are obvious as sharks are worth far more alive than dead: as apex predators they should be respected given their masterful role in balancing our ocean ecosystems; they clearly offer good fortune as they bring in billions of dollars in tourism revenue (sharks contribute $800 million to the economy in the Bahamas alone each year), and represent one of our last links to our past (sharks have roamed the earth since before the time of the dinosaurs). Killing them by the thousands for a cup of soup just doesn't add up.

The worldwide movement to end shark finning seems to be reverberating, with the decision from China the most recent addition to a string of wins for sharks. Fortunately, awareness levels are surging about the drastic declines in shark populations. And a sense of urgency is warranted, with many shark species so decimated that only 1 out of every 100 remain. Nations including Chile, Honduras, Palau, and others have banned shark finning in their waters. In the United States, Illinois recently became the 5th state to ban shark fins, proving that even citizens in landlocked states are on board when it comes to protecting sharks. But there is still much work to do internationally -- the shark fin trade is still going strong at large ports such as Dubai's Deira Fish Market; and at the An Phu port in Vietnam.

Perhaps the largest obstacle for shark conservation is the way we see the sharks themselves, who over the years have become tragic victims in their own stories. Sharks are misunderstood creatures. We have been co-exisiting with sharks throughout human history, and yet our scientific understanding of sharks is still in its infancy. In this vacuum of information, myths have not only taken over our imaginations but they have run wild. When we think of sharks we may find ourselves picturing monsters, but the truth is that sharks have much more to fear from us than we do from them.

Just ask my friend William Winram, a world-renowned freediver and self-proclaimed "shark publicist" who swims with great whites and calls tiger sharks 4 ½ meter house cats! In his recent Ted talk he describes sharks as complex creatures, which have been inaccurately sensationalized as man-eaters by the media -- in essence mass media has been promulgating a "Great White Lie." Winram explains "nobody cares about the villain, and nobody wants to protect them."

But far from being villains, in reality sharks are the heroes of our oceans. Much like terrestrial wolves or lions, sharks sit at the top of the marine food web, securing the health and balance of the entire ocean ecosystem. There are hundreds of species of sharks, ranging in size from whale sharks, gentle giants that tower over 40 feet in length, to itsy bitsy lantern sharks that can fit in the palm of your hand.

Sharks are some of the most majestic creatures in our seas, they have been ruling the waters for over 400 million years, but now, in the blink of an eye we could lose them forever... That is why it is critical that we take action right now.

Saving sharks starts with you! Spread the word about the crisis facing sharks by sharing the shocking truth about finning and telling your friends about the unseen side of sharks to help shift our collective perception. Finning is the #1 threat to shark populations -- encourage your state to be next in the line-up to ban the shark-fin trade and stand up for the "dragons of the sea", otherwise known as sharks.