There's going to be an extra-special moon this weekend.

On Aug. 10, when the moon turns full at 2:10 p.m. EDT, skywatchers will be treated to the sight of a so-called "supermoon" -- and it will be the largest supermoon of the year.

The phenomenon -- any full moon that coincides with the time in the moon's orbit when it's closest to Earth -- should be visible on Sunday night after sunset.

Head over to the U.S. Naval Observatory's website to check local times for the supermoon in your area.

How spectacular will this supermoon be?

In comparison to other full moons, supermoons can be up to 14 percent closer and 30 percent brighter, according to NASA. In addition, the August 2014 supermoon will become full during the same hour that the moon comes closest to the Earth (lunar perigee), meaning it will outshine other full moons that have fallen on the same day as the lunar perigee.

Send us your supermoon photos this weekend!

You can tweet your photos with hashtag #HuffPostSupermoon. Or, you can submit them directly to our "Supermoon 2014" slideshow, which will be featured in our supermoon live blog on the evening of Sunday, Aug. 10.

The August supermoon may also pair nicely with the Perseid meteor shower, which should be visible this weekend when Earth passes through the debris zone left by Comet Swift–Tuttle. The Perseids, which may offer skywatchers a view of 100 shooting stars per hour, will peak between Aug. 10 and Aug. 13.

This year was an exceptional one for supermoons, with three appearing in a row --one each in July, August and September. The next supermoon will fall on September 9, 2014. 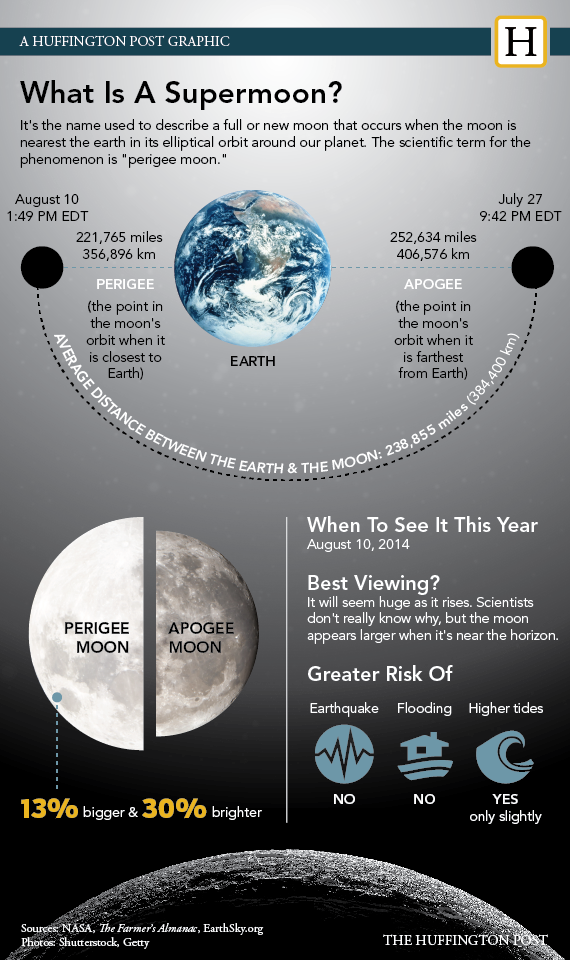