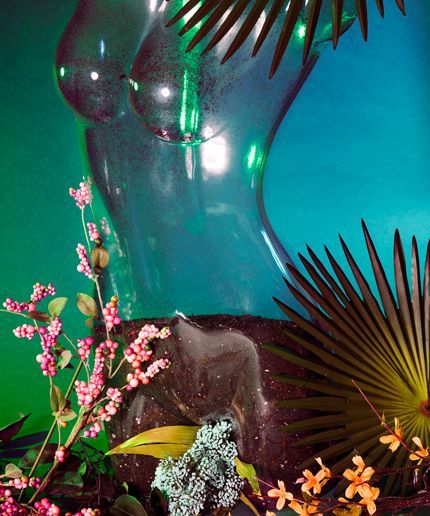 It might seem like fertility is an easy thing. All you need is a sperm and an egg, right? Certainly, your typical sex ed makes it seem like it's extremely easy to get pregnant. But there's a lot more that goes into it than you might think -- especially when you're talking about ovulation.

So what's actually happening when you're ovulating? "A follicle inside an ovary is releasing a microscopic egg so the fallopian tubes can catch it," explains Carolyn Alexander, MD of the Southern California Reproductive Center. This happens roughly midway through your menstrual cycle. From there, the egg will eventually make its way through the fallopian tube to meet up with a sperm in your uterus. If that doesn't happen, your body will just reabsorb the egg, you'll have a period, and the whole cycle will start again.

But that's just the short version of the story. "There's actually a lot of mechanisms going on in order for the egg to safely exit and be caught," she says. During all of these steps, there is, of course, the surge of hormones that affect a lot of your body's processes (not just your menstrual cycle). There are also specific enzymes released that are responsible for opening just the rim of the follicle to allow the egg to escape. Finally, we can't forget the granulosa cells, which form a sort of shell for the egg and help prevent miscarriage down the line.

With all of those complex factors at play, it's no surprise that so many of us are kind of clueless when it comes to ovulation. This can set us up for some frustration when we start to think about fertility. "The window of opportunity for fertilization is actually quite slim when you think about a whole month of timing intercourse," Dr. Alexander says. "Once the egg has been ovulated, it has about 24 to 36 hours to see sperm." That means that the few days right before and after you ovulate are when you're most likely to conceive.

Knowing your cycle can make your life so much easier -- whether you're trying to get pregnant or actively avoiding it. In addition to tracking your periods (with or without the help a friendly app), there are some common (if not universal) signs that you're ovulating:

1. The "hallmark" sign that you're about to ovulate is that your vaginal discharge will become thinner, clearer, and stickier, Dr. Alexander says. This change in consistency, compared to the thicker stuff beforehand, makes it easier for sperm to embark on their long journey to the egg.

2. Your basal temperature (a.k.a. your temperature when you first wake up, which you can track with a thermometer and more apps) will also fluctuate throughout your cycle. But there's a temperature spike right after you've ovulated. So, if you're trying to get pregnant, your prime sex-having time is right before that, which means you may need to track it for a few months.

3. One of the more unusual signs is a change in libido. Specifically, Dr. Alexander says it's common for her patients (and many women) to report an increased desire for sex around the time of ovulation. That's all thanks to climbing estrogen levels combined with the surge in testosterone that results in ovulation.

4. Ovulation may also cause a particular kind of cramping called mittelshmerz (literally "middle pain"). Not everyone gets it, but those who do tend to feel a dull, aching pain on one side of their lower stomach. The side that's painful corresponds to the ovary that's releasing an egg that month. Luckily, the pain doesn't usually last for more than a day and may be as short as a few minutes. (If it's lasting or it's really uncomfortable, you can take acetaminophen to ease it.)

5. You may also notice some spotting around the time of ovulation.

Sometimes this spotting is actually implantation bleeding. This happens when an egg has been fertilized, and "the embryo [is] trying to burrow into the uterus," Dr. Alexander explains. It usually occurs around the time you'd expect to have a period, but it can happen as soon as five days after ovulation, Dr. Alexander says.

Otherwise, any mid-cycle bleeding should be investigated by your doctor. Sometimes this is the result of normal hormonal changes, but it can often be a sign of a fibroid (a benign uterine growth). So your doctor will want to know what's going on.

6. Some women also have PMS-like symptoms when they ovulate, including breast tenderness and bloating. "But that can be clouded by actual PMS because estrogen has spiked," says Dr. Alexander. So it's hard to tell whether those are coming from ovulation or the hormone surge right before your period.

However, not everyone experiences all of these signals. First of all, if you're on hormonal birth control, you are not ovulating at all (this is how the pill and similar methods prevent pregnancy). For those who are not using a hormonal method or are trying to get pregnant: Some of these signs, such as the changes in discharge and temperature, are more universal than others.

Additionally, women with other issues affecting their reproductive systems may have unique challenges when predicting ovulation and fertility. For instance, the environment around the egg in the follicle may be altered in women with endometriosis. And patients with PCOS often ovulate later in their cycles than others (around day 16-20 compared to day 13-15), Dr. Alexander explains. Still, if you think something might be up with ovulation (or any stage of your cycle) it's worth checking in with your gyno.

Correction: This story has been updated with clarifications about basal temperature, pain relief during ovulation, and implantation bleeding.

More:
healthy living
Newsletter Sign Up
The Morning Email
Wake up to the day's most important news.
Successfully Subscribed!
Realness delivered to your inbox