As 2015 gave way to 2016, people around the world adopted New Year's resolutions to quit smoking, lose weight, read more, or engage in physical activity. At the global level, the United Nations made a resolution as well for nations to work together to improve the lives of billions of people worldwide.

Several months ago on Sept. 25, 2015, the 193 member states of the UN unanimously adopted the 2030 Agenda for Sustainable Development. This historic agenda includes 17 Sustainable Development Goals (SDGs), which will be addressed by a broad range of global stakeholders over the next 15 years. The UN's unanimous adoption of the SDGs itself represents a triumph of global collaboration, serving as a catalyst for joint efforts to address the most pressing global challenges of our time. The 2030 Agenda represents a commitment for future cooperation between allies and adversaries alike. At a time of ongoing conflicts around the world, advancing humanitarian initiatives such as the SDGs is vital to forging stronger international bonds and realizing societal progress across national borders. On the same day the Agenda was adopted, Pope Francis addressed the UN General Assembly with a message that underscored the mission of many of the SDGs: eliminate poverty, reduce inequality, address the impacts of climate change, and improve health for all.

The SDGs are set to accelerate the momentum of their extremely successful precursors, the Millennium Development Goals (MDGs), which were adopted 15 years ago in September 2000. The first of their kind, the MDGs mobilized unprecedented worldwide efforts to reduce poverty, decrease child and maternal mortality, and prevent the spread of infectious diseases. A testament to their success, global aid has increased by more than 50 percent since 2000, with OECD countries alone providing over $120 billion annually. Transitioning from the MDGs to the SDGs emphasizes the need for continued efforts that will both improve the wellbeing of people today as well as strengthen communities and countries for future generations.

The concept of human development championed by the UN emphasizes "expanding the richness of human life, rather than simply the richness of the economy in which human beings live." With a forward-looking premise, the 2030 Agenda for Sustainable Development targets inequality around the world. In the Information Age, no one should be left behind as globalization and innovation rapidly improve standards of living. Yet, a recent report found that the 62 richest people in the world now hold the same wealth as half of the global population; this statistic underscores the problem of income inequality globally. Today, over 800 million people, 12 percent of the world's population, live in extreme poverty, earning less than $1.25 a day. Clean water, sanitation facilities, primary education, and basic healthcare services are still inaccessible for hundreds of millions of people. Without assistance, these individuals, families, and, in many cases, entire communities will be left to suffer with little hope or ability to improve their circumstances. The SDGs, as did the MDGs before them, seek to raise the quality of life for the most underserved people and communities around the world, establishing a basic standard of living for the global community.

While development goals are morally compelling, they also establish economic and public health incentives for all sectors of the global community. Promoting health for all encourages economic productivity within communities, which facilitates more trade, helps open new markets, and, in turn, can create a more robust global economy. By working to achieve the SDGs, risks for global epidemics can decrease, helping avoid the potentially devastating health and economic consequences of disease outbreaks. The recent Ebola outbreak in West Africa, and the explosive spread of the Zika virus, demonstrate that strengthening health infrastructure in every community, especially those that are underserved, significantly contributes to preventing and containing infectious disease outbreaks. These two examples illustrate how sustainable development can both help those most in need, while also serving as an investment in a better, healthier, and more prosperous future for everyone, everywhere.

Since their adoption last year, the SDGs have been greeted with praise, but also with some criticism. Numerous challenges have been identified -- from the sheer cost of carrying out these actions, to who will be accountable for their implementation. While the new SDGs ambitiously seek to achieve a healthier, cleaner, fairer, and more peaceful global community, some have called into question the 2030 Agenda's achievability. Critics are quick to point out the large number and diverse portfolio represented by the SDGs. Where the MDGs had eight general objectives, the SDGs will address 17. Where each MDG had, on average, two to three targets per goal (21 total), the SDGs will have about 10 (for a total of 169 targets). Additionally, each MDG target had, on average, three evaluation metrics, called "indicators." The indicators for the SDGs have yet to be issued; they're due by March 2016, and if their MDG predecessors are a guide, there will likely be hundreds. Given that some of the MDG targets were not technically met, some experts question the significant expansion in the SDGs' scope. Other concerns regard the lack of specificity of some of the SDG targets. Some people question the achievability of all of the SDGs because the language adopted does not set specific enough targets. Nonetheless, as it has been said, "a goal is not always meant to be reached, it often serves simply as something to aim at." As the MDGs demonstrated, working to achieve the SDGs will undoubtedly result in progress, regardless if all targets are technically met within the next 15 years.

While some of the 21 MDG targets were not technically met, the progress achieved through international collaboration over the past 15 years has been extraordinary. Substantial gains were made toward each MDG. For example, since 1990 (a baseline for many MDGs), child mortality has declined by 53 percent, maternal mortality has been reduced by 45 percent, and 15 percent of the world's population has gained access to clean drinking water. Additionally, since 2000, 15 million people now receive treatment for HIV/AIDS worldwide (a dramatic increase from the less than one million who did so in 2000), and annual new HIV infections have fallen by 42 percent worldwide during this time period. The bottom line: The work to meet the MDGs improved countless lives; even though every MDG target was not technically met.

Though the scope may seem daunting, the SDGs reflect the diverse and complex challenges that face societies around the world. By adopting additional goals to those included in the MDGs, a broader range of stakeholders must now join together to meet the diverse set of objectives, helping to mobilize greater investment and resources. For example, the MDGs did not include a goal to reduce the impact of non-communicable diseases (NCDs). Considering that in 2012 NCDs accounted for 68 percent of global mortality, this was a major public health oversight. However, in the SDG framework, Target 3.4 seeks to reduce premature mortality from NCDs by one third. As a result, both public and private sector organizations that focus on NCDs can now be included in this important UN initiative.

With a broader range of goals, more groups will now work together to address the most pressing global challenges of our time. Innovative strategies are needed to efficiently and simultaneously address multiple issues. Policy frameworks are being developed to create effective coalitions for action and many key stakeholders have already begun to mobilize. First steps are being taken as significant funding commitments and instances of debt forgiveness for the world's poorest nations launch efforts to achieve the SDGs. A new approach to partnerships with a comprehensive system of global governance, underpinned by strong monitoring mechanisms can ensure that action leads to measurable results. Key elements for a successful framework to approach the SDGs are illustrated in the graphic below, they include: 1) securing high level leadership; 2) ensuring partnerships in every nation; 3) avoiding fragmentation and duplication of efforts; 4) ensuring that governance is inclusive and transparent; 5) applying the right type of partnership model for the challenge being addressed; 6) agreeing on the principles, targets, and implementation strategies as well as enforcement mechanisms; 7) clarifying roles and responsibilities of stakeholders; 8) maintaining a focus on achieving results; 9) measuring and monitoring progress in meeting the SDGs; and 10) mobilizing financial support and using funds effectively. 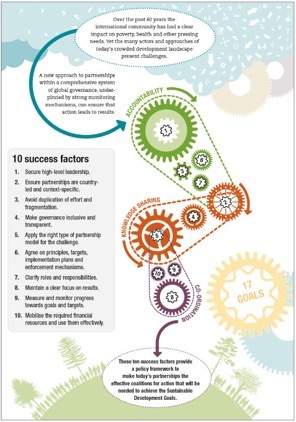 The 2030 Agenda for Sustainable Development will hopefully galvanize unprecedented global collaboration for improving the lives of billions of people in the 21 century. Governments, businesses, non-profit organizations, foundations, and global institutions of all sorts must work together to achieve the SDGs. The commitment to ensure that everyone has a fair shot in life is a transformative principle that will require innovation, cooperation, and dedication to achieve a healthier, fairer, and more prosperous world by 2030, a world that leaves no one behind. The time for action is now.

Rear Admiral Susan Blumenthal, M.D., M.P.A. (ret.) is the Public Health Editor of The Huffington Post. She is a Senior Fellow in Health Policy at New America and a Clinical Professor at Tufts and Georgetown University Schools of Medicine. She is also the Senior Policy and Medical Advisor at amfAR, The Foundation for AIDS Research. Dr. Blumenthal served for more than 20 years in senior health leadership positions in the federal government in the Administrations of four U.S. presidents including as Assistant Surgeon General of the United States, the first Deputy Assistant Secretary of Women's Health, and as Senior Global Health Advisor in the U.S. Department of Health and Human Services. She also served as a White House advisor on health. She provided pioneering leadership in applying information technology to health, establishing one of the first health websites in the government (womenshealth.gov) and the "Missiles to Mammogram" Initiative that transferred CIA, DOD and NASA imaging technology to improve the early detection of breast and other cancers. Prior to these positions, Dr. Blumenthal was Chief of the Behavioral Medicine and Basic Prevention Research Branch, Head of the Suicide Research Unit, and Chair of the Health and Behavior Coordinating Committee at the National Institutes of Health. She has chaired many national and global commissions and conferences and is the author of many scientific publications. Admiral Blumenthal has received numerous awards including honorary doctorates and has been decorated with the highest medals of the U.S. Public Health Service for her pioneering leadership and significant contributions to advancing health in the United States and worldwide. Named by the New York Times, the National Library of Medicine and the Medical Herald as one of the most influential women in medicine, Dr. Blumenthal was named the Health Leader of the Year by the Commissioned Officers Association and as a Rock Star of Science by the Geoffrey Beene Foundation. She is the recipient of the Dr. Rosalind Franklin Centennial Life in Discovery Award.

Jacob McAuliffe, MSTP is a recent graduate of Arizona State University where he received a Masters Degree in Science and Technology Policy. Jacob serves as Fellow at New America researching the complex issues that arise at the intersection of health, science, and technology policy.