By Agnieszka Flak and Helen Nyambura-Mwaura

LUDZIDZINI ROYAL VILLAGE, Swaziland (Reuters) - Thousands of bare-breasted young Swazi women paraded in front of their king to celebrate chastity and unity, dismissing criticism of the lavish ceremony in one of Africa's poorest countries for its last absolute monarch.

Clad in beaded mini-skirts and clutching machetes and mobile phones, women and girls as young as five danced and sang tributes on Sunday and Monday to the king and queen mother, also known as the Great She-Elephant, in a traditional Umhlanga Reed Dance meant to celebrate womanhood and virginity.

"I'm proud to be Swazi and to be a virgin. We are here to show unity with the king and with each other," said 18-year-old Gcebine Dlamini, bracing the cold of the southern hemisphere's winter in her skimpy outfit as scores of tourists had photos taken next to the topless women.

King Mswati III, who has at least a dozen wives and a personal fortune estimated at $200 million, faced unprecedented protests last year when his appointed administration ran out of money after a 2009 recession in neighbouring South Africa.

Despite the straitened times, the royal household has shown few signs of wanting to tighten its belt. In July, South Africa's Mail and Guardian newspaper reported that three of Mswati's wives joined a 66-strong royal entourage heading to Las Vegas on a shopping spree. There was no comment from the palace.

But women at the annual event gathered behind the monarch in the week-long celebrations, even though police kept a close watch on what they might tell journalists and tourists roaming the grounds of the royal village, some 20 km (12 miles) outside the capital.

In the past, the king has used the ceremony to choose a new wife, and some girls still hoped to catch the king's eye.

"If chosen, I would be able to live a better life than what I have, have a lot of money, live a queen's life and travel overseas," said Fakazile Dlamini, 14, who arrived on a lorry from her village 60 km away to attend the ceremony.

New royal wives have often received a BMW and their own palace, fuelling criticism in a country where more than two-thirds of its 1.4 million people live in abject poverty.

Maidens flocked in from across the country - some attend the ceremony every year until they marry - cut reeds from river beds, which they then presented to the queen mother in a mile-long singing and foot-stamping procession.

In the past, they would have been accommodated by families living close to the royal household but are now put up in camps and protected by police from other men.

Even though the girls refuse to criticise UK-educated Mswati who arrived at the event dressed in beads and lion cloth, not everyone supported his polygamous lifestyle.

"I don't want to be a queen, I don't want to share my man. Polygamy is not okay," Siphesihle Mdluli, 20, who hopes to go on to study medicine said while waving her bundle of reeds. 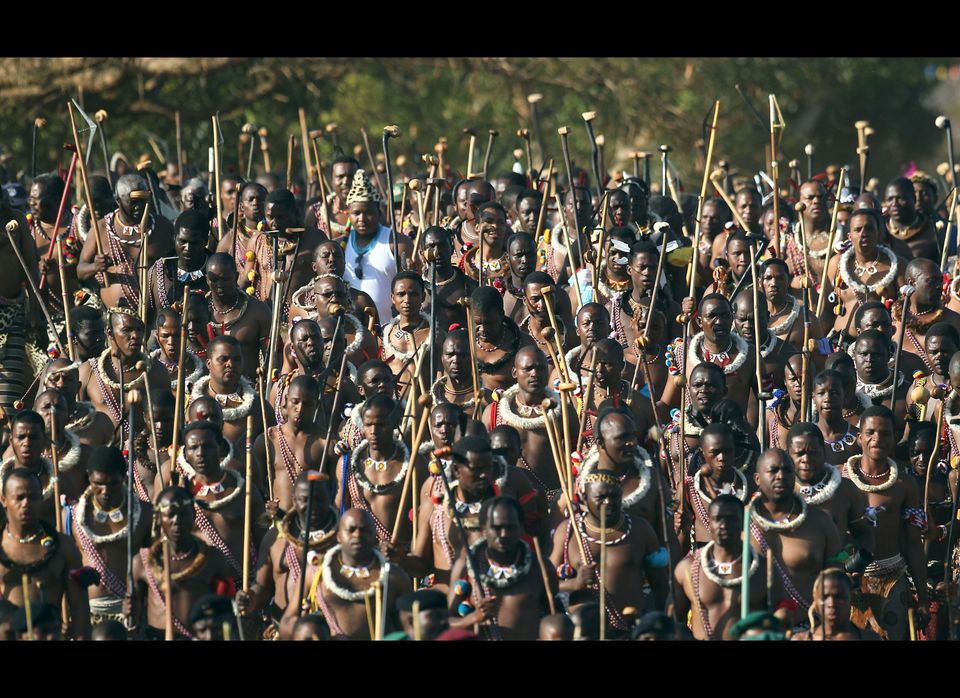