"Do you want to hear the drama of the day?" Zeke asked me. I was ill and out of commission so he took the boys to the pool at our local YMCA. T had been begging to go for weeks. He was desperate to take the test to qualify for a green band so he could swim without parental supervision. He already earned a yellow band, a step up from the default red kids are required to wear, but he wanted to prove he's a real swimmer.

"We found a lifeguard and T asked if he could swim the length of the pool using backstroke. And he did. He did it. And then he tread water for 30 seconds."

I could barely speak around my huge grin. "No. Way. NO WAY! Oh man. Seriously? Oh MAN, I am so proud of him!"

"The lifeguard put a green band on T, and you should have seen the look on T's face. So about 20 minutes later another lifeguard motions us over, the head lifeguard. He told us you can't pass the test with backstroke."

"But. The lifeguard let him take the test again doing freestyle."

"No, he did it. He swam the whole length of the pool. He really struggled the last 20 feet or so, but he made it."

"What? I am shocked! I really didn't think he could get all the way across doing freestyle! That is amazing!"

"But the lifeguard didn't think he was a strong enough swimmer. So he cut the green band off of T's arm."

"He did it. He did what he was supposed to do for the test. And he still didn't get the green band?"

"Actually, if you think about it he swam two laps, not just the one. But basically correct."

My eyes filled with tears. T is a careful kid when it comes to trying new things. He worries about looking foolish in front of others and it really holds him back. This test was a huge deal in his almost-7-year-old world. "How did he handle it?"

"He was pretty upset. But he held it together. We swam for a while longer and then left. He doesn't seem to want to talk about it."

"You know, I think we should say something to the swimming director. I mean, I do not want the lifeguard to give our kid the band at the expense of his safety. But they say the test is to swim the length of the pool and tread water for 30 seconds. So that is what the kids expect. If the test is to do that stuff and be evaluated on how strong they are while doing it fine. Great. But they should make their expectations clear. It isn't fair to the kids!"

I was ready to fight back, to protect my kid from the hurt. Except, sometimes life isn't fair. My impulse is to shield him from that pain forever. Which is ridiculous. I want him to know how to navigate disappointment and be able to bounce back when life doesn't go his way.

Zeke left to grab us take-out for dinner. T sidled up and leaned against me. "Mom, something terrible happened today."

"Oh, baby. I know. Daddy told me. You know, I don't think I have ever been as proud of you in your entire life as I am right now. You tried, you did your personal best. And sometimes we try as hard as we can and we don't manage to do it. But baby, the most important part isn't succeeding. The most important part is trying. I am so proud. I love you so so so much."

Thank god for Zeke. "You know what? You are right. And it stinks. But sometimes we do what we are told we need to do and we still don't get what we want. Sometimes life is unfair. It hurst so bad, it is totally uncool, but it happens to everyone. Seriously, everyone. I am still the proudest of you that I've ever been, you know. And you are going to get that green band. You just need to practice some more."

I buried my face in his hair and breathed in the chlorine. "I know, baby. Sometimes it isn't fair." 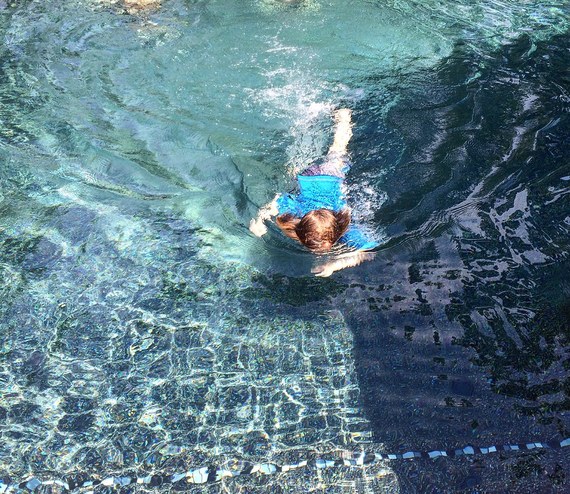 More:
ParentsParenting swimmingKids
Newsletter Sign Up
Raise the kind of person you'd like to know
Subscribe to our parenting newsletter.
Successfully Subscribed!
Realness delivered to your inbox