A spiritual environment is a delicate balance of space, requisite furnishings and inspirational elements designed to stimulate a spiritual mode of thought without becoming a distraction. When successfully achieved, it is more than just a backdrop; it can be the catalyst for a sincere dialogue between the individual and God.

For many religions, the designated houses or places of worship are meant to be grandiose and awe-inspiring constructions, eliciting reverence, fear, respect and veneration from all who enter. More often than not, there is also the intention to bring into clear contrast the insignificance of man and his actions in this world with the sublimity of God.

Almost all of the world's religions expend a great deal of energy and expense in the building and consecration of these structures. They form the nexus around which communities coalesce and give focus to religious activity and devotional service. Their construction offers congregants the opportunity to give of themselves and of their resources, providing an outlet for a deep-seated need to contribute and partake in what is perceived as an unusually meaningful endeavor.

The biblical source and description concerning the construction and use of the Mishkan, also known as the Tabernacle, which the Jews carried during their 40-year sojourn through the desert, is replete with detail. Spanning three biblical books, the narrative attests to the tremendous importance designated to the Mishkan itself, its historical offshoot -- Solomon's Temple -- and today's modern descendant, the synagogue.

Pointedly, the Mishkan is described as a "place" in which God will be "residing among them" -- the people, who will pray within his midst -- rather than simply exist within the structure.

The challenge in the design of our religious environments lays in how they affect us and speak to our nature, rather than if they reflect in some manner the immutable qualities of God. If these structures are meant to be a meeting place, a place of dialogue, of supplication, a place where we can be our most honest, exposed and vulnerable selves, shouldn't their concept and design reflect these aspirations?

So much of Judaism -- its practice, its lore -- is vivid, pictorial drama. From the service in the Mishkan, to the great miraculous episodes that make up our history -- our culture is suffused with stunning and powerful visions and symbols replete with underlying significance and meaning. According to Midrashic lore, the Theophony at Mount Sinai was attended by Jews past, present and future. The themes of egalitarian inclusion spanning the eons of time, and individual distinctiveness, are foundational in their message of acceptance and tolerance. This is an example of a theme that if executed in a sophisticated and thoughtful manner could infuse the spiritual environment with deep significance and meaning.

So many of our synagogues rely on standard themes presented without subtlety and depth. On the one hand, the ubiquity of symbols like the Star of David, the Tablets portraying the Ten Commandments, crowns, lions, etc. provide comfort and familiarity in Jewish settings. They are immediately recognizable, instantaneously comprehensible and completely unambiguous. It may be, however, that both their ubiquity, and the generally languid manner in which they are presented, are precisely the problems with their too frequent usage.

If the religious environment should provide both context and stimulus for inspiration and aspiration, shouldn't the design of the space promote those qualities? It is my belief that both inspiration and excitement may be derived through spiritual compositions that are traditionally proper, conceptually harmonious with the religious philosophy of the congregation, and representative of a fresh and exhilarative approach to what has become standard and stagnant. If one explores any of the major biblical themes suggested above, artistic and inspirational creations may be wrested from them. These creations needn't be figurative and literal but open and abstract, full of allusion and artifice, allowing the congregant to make his or her own associations and connections.

If the true purpose of the spiritual space is to accommodate one of the most ennobling and enabling activities known to mankind -- prayer -- that space should embody those qualities in its design. If the environment aims to stimulate and inspire the spirit of the individual and focus his or her imaginative musings on coming closer to God, rather than amplifying the profound differences between human and God, we will be providing a greater service to our worshippers and community.

The challenge in our sacred spaces is to seek out ways to use the vast repository of traditional sources to inspire and animate our hearts and our souls. We must create associations that identify without completely defining, that illuminate without diminishing, and ultimately allow the thoughtful observer to enhance and intensify his or her perceptions. In order to balance out the obsessive nature of traditional Judaism to "concretize," it is imperative to develop and cultivate a whole new realm of cognitive sensibilities. We must recognize that certain conceptual notions must fundamentally defy concretization if they are to expand our spiritual nature.

Edward Jacobs is a concept designer of synagogues and Jewish exhibitions in the United States, Israel and Europe. A principal at The Berenbaum Group, he is currently designing The Holocaust Memorial Center for the Jews of Macedonia. 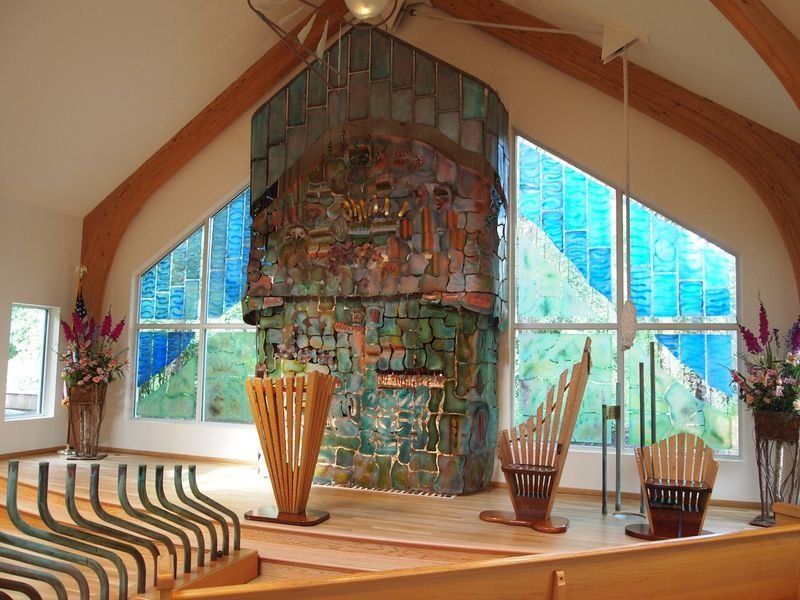