Jesuit Refugee Service Acting International Communications Coordinator Jacquelyn Pavilon recently visited the JRS center in Jbeil, Lebanon, where she spoke with both students and teachers. She shares her visit here.

Even before the Syrian war started, Lebanon was one the most densely populated countries in the world. Since 2011, between 1.5 million and two million Syrians have fled to Lebanon. More than 25% of the Lebanon's four million population is now Syrian; hence, schools are overcrowded and waiting lists are long. Many refugee children find themselves out of school two to three years.

Syrian children face a variety of barriers trying to enter into the Lebanese public school system. Language barriers, entrance exams, lack of transport costs and xenophobia by public school teachers and other students make access to school more than difficult.

The Jesuit Refugee Service center here in Jbeil helps Syrians by providing language catch-up classes, psychosocial counselling and other services to refugee children and their families. The center serves approximately 500 children -- 250 in the morning and 250 in the afternoon. The center serves as a holistic care center, providing children language support and other services.

"Many of the children at our center have been out of school two to three years. When they arrive to us, they are basically starting from scratch," said Catherine Mora, a Syrian refugee and teacher at the JRS center.

The center also provides psychosocial support in addition to educational support. Part of the counseling includes group Peace Education classes, through which the children learn how to play in a non-violent way and resolve conflict amongst themselves.

"They children no longer fight when they play. Rather, they play with each other. Sometimes I see them playing 'English class' at recess, where one is imitating the student and one is imitating me as the teacher. When I see this, I feel their progress," said Catherine.

Each student's situation is unique, and each still lives a transient life. "You may see them today; you may not see them tomorrow. This is their story." Yet, while the children are in the center, JRS tries to form a community in which the children have a friend network and feel comfortable.

The aim of the Jbeil program is to provide remedial support for children so that they are able to transition children into the Lebanese public system. "When I see the children moving to government schools, I know we've put them on the right track. They have 'made it' in a sense. We need to get all the children off the waiting list."

After living through the trauma of war, most of the children need more than a traditional education. The children's before-and-after drawings show, in their eyes, what life was like before displacement, during the war in Syria, and after they fled to Lebanon and enrolled in the JRS programs.

Learn more about JRS in the Middle East here.
You can support JRS programs in Lebanon and elsewhere by making a secure online donation today. 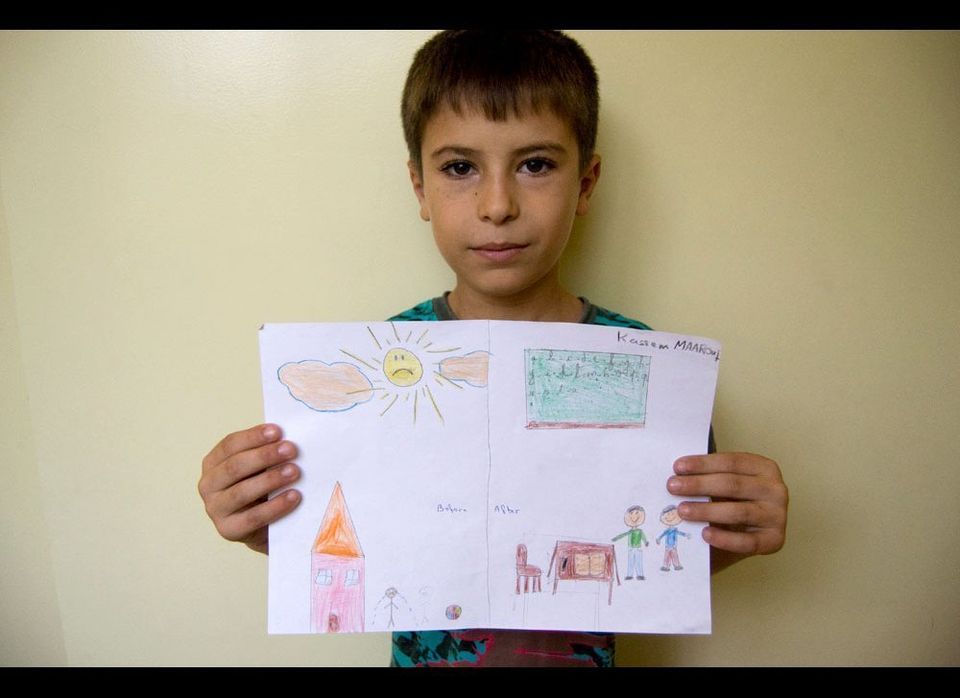 1 / 12
More than 550,000 Syrian children in Lebanon are out of school. (Jacquelyn Pavilon — Jesuit Refugee Service)