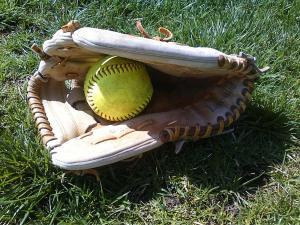 Always the "last pick" as a kid, the idea of once again playing a team sport stirred painful memories. Now as an adult I had even less skills to bring to the field, and what's worse, I had no softball costume.

But my husband said some nonsense about having the right men to women ratio and having to forfeit the game otherwise, and blah, blah, blah, cry me a river. I reminded him of my lack of talent, but it was no use. The only qualifications required were double X chromosomes and a beating heart. Unfortunately I had both.

"Don't worry. It's just a bunch of old people, having fun," my husband insisted. "I promise I won't put you in any position where you might be embarrassed . . . and it's a uniform, not a costume."

Once there, I nervously approached the dugout and my teammates offered a friendly welcome. While twenty years ago these men (and perhaps some of the women) might have greeted my slender physique with approval, on this night they eyed my Olive Oyl figure with concern. Clearly there would be no power behind my swing, assuming I could even lift a bat.

The opposing team's players were covered head-to-toe in scary tattoos and sported intimidating scowls. I questioned my husband. "Game face," was his reply. Great.

Last up at bat, I trembled at the plate. The largest, most tattooed man on their team stood on the mound.

The ball came and I swung hard. Surprisingly, I made contact. I sprinted for first and was safe. The crowd went wild. Okay, not really. But my teammates seemed pleased and my husband looked genuinely shocked.

Then someone on our team must have gotten out because I was told I needed to leave the field. As I headed back to our dugout my teammates rushed toward me, arms raised in the air as if poised for attack. I lifted my own arms instinctively to protect myself, but then realized, oh, they want to high five. I awkwardly reciprocated.

"Did you see that? I got a hit!" I boasted to my husband.

"Yes, it was actually a fielders choice, but sure, great job!"

I didn't care what fancy term he called it; it felt good. Maybe I wasn't that bad at sports after all? Maybe if I had just tried a little harder as a child I could have been a jock? I finally started to relax.

"Okay, so on the next one," my husband continued, "if you get on base I want you to let Marian pinch-run for you."

"Well, it's a tight game and Marian runs a little faster." he replied.

I looked over at Marian, who might have been ten years younger, but was easily 40 pounds heavier. "Really? She doesn't look faster. Are you sure she's faster?"

"Oh trust me, she's faster. Though not as fast as she was before she started her cancer treatments," he added.

"I'm slower than a woman with cancer? Am I that slow?"

He didn't answer. The game continued. People hit, people ran. No one smiled or laughed. I got on base with a walk. Marian took over. The tattooed guys scored. The umpire and I repeatedly checked the time.

Though ultimately we lost, my teammates thanked me for a "Great job." Fibbers all.

My husband insisted that they were being sincere, and reminded me that I saved them from a certain forfeit. "The fact that you actually got on base was a bonus," he added.

Then, back in the car I suddenly fought back tears. Why? Good Lord, why - over a dumb softball game? Perhaps it was just a tension release, from spending ninety minutes on edge, worried I'd be discovered as an imposter in their midst.

Or maybe it was because I didn't expect these people to take the game so flipping seriously. After all, these were middle-age men and women playing high arc, level "C" coed softball. Clearly not a one of them had a shot at the major leagues.

I thought that since these players were old and just playing for fun that it would be more relaxed than the horrible games of my youth. I thought there'd be laughter or goofing around. I expected people to actually look like they were having fun. Otherwise, why play?

"Because playing hard, and competing to win is what makes it fun," my husband explained.

I stared at him blankly, as if he were speaking another language.

There are two kinds of people in the world.