It is the start of 2016. The world's largest technology event, CES in Las Vegas is nearly half a century old and takes place January 6th - 9 with over 170,000 attendees anticipated at the upcoming gathering. It's the place I'm visiting to see a group of startups pitch for the opportunity of a lifetime in front of a distinguished group of judges. We are living in the Golden Age of Technology, a phenomenal era of accelerated change and reimagining everything. In this Techs and the City collection, tech thought leaders share their expertise, vision and wishes, helping wrap our minds around this mysterious rabbit hole. I am kicking off writing this series that has taken over a year to research, in a conference room at a plant somewhere outside of Beijing, where I am told, one million pairs of hands (throughout China), work to create our mobile devices. There is so much smog, people wear masks and a young artist I spoke to in Beijing's art hub and home to Ai Wei Wei's installation in District 798, envisages a future where the air is clean. There are a lot of grand challenges we are faced with - yet through remarkable innovation that transcends borders to enhance our lives, the future is bright. Part 1 Starting Up, features the world of startups; they are disrupting, impacting and hacking our world in very exciting ways.

Everyone loves Kym McNicholas. It is no surprise - with what she's done for startups, she's been reporting in the Silicon Valley over the past two decades, she is a trailblazer in the broadcast industry and she is someone who genuinely cares. I first met this superstar EMMY AWARD-WINNING Anchor/Reporter/Producer and Entrepreneur at a startup event where she was on a panel of judges with peers from TechCrunch, the SF Chronicle and local TV anchors. It is my good fortune to have had her guidance as she generously shares her wisdom in this Brave Tech World where anything is possible, I've been following her since 2014 and here is her story.

Kym is a bona fide Northern California lady, growing up in Marin she's used to being plugged into an environment that has "always been fast paced, always executing on ideas and making things happen." She fondly remembers a time when Silicon Valley wouldn't say no if you wanted help. "It was easy to talk to anyone," she explained when we met before a Holiday Party last month, "they'd love educating people, who were so passionate." Access in the Silicon Valley has since become much more limited. What's at the heart of it for Kym is she loves having an impact and helping guide startups, "I feel blessed to want to be that for other people. And I love watching the whole thing evolve. It's more than a job, I love helping others achieve their dreams and am inspired by people making connections from the heart. It doesn't have to be a billion dollars. What if we inspire people to create their own financial independence? Now's the perfect timing to bring people to together through my relationship with Edcast so they can talk to VC's, someone sitting in Capetown South Africa can't access people like VC, Tim Draper."

As Executive Director of Extreme Tech Challenge or XTC, the world's largest startup competition, Kym does just that. "There are no winners or losers in innovation, you need to appreciate every single little win, whether you've scored your first URL or are filing for NASDAQ." She is surrounded by people like MaiTaiGlobal cofounders Bill Tai and Susi Mai, who have created a thriving startup legacy that embraces everyone with passion in a playing field cheering through the ups and the downs. 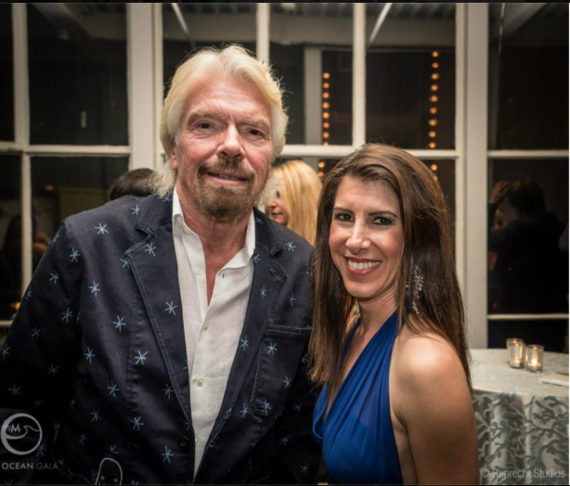 Last year's Top 10 have had tremendous progress, proving start up competitions like XTC do matter. The outcomes speak for themselves, Canva doing it's series A at $165 million after being born in this community. CEO of Wanderu, Polina Raygorodskaya launched her millennial travel by bus app and it went to number 1 with great interest and investment from Sir Richard Branson, whom she met and pitched to on his private island, Necker, as a top 3 XTC finalist in 2015 along with winners Breathometer and Doctor on Demand, who have also found their lead investors. Kym is enthusiastic about the XTC community and says what's special is "you could hang out with anyone like reality star big name Charles Michael Yim (CEO of Breathometer and last year's XTC winner) and he'd be there at every stage to rally around kiteboarding friends announcing they'd shipped their first set of helmets."
Good examples of how to serve up tech as it it so far ahead of our time, Kym mentions, "Apple did a great job. Designing things for how people are and guiding where you want them to be. It's got complex putting design in the boardroom." She also brings up innovation guru "Phil Mckinney, HP's former CTO, would spend weekends going to where his customers were buying, finding what people do and really want. He now lives in Boulder Colorado, where there's a give first mentality. He has a nonprofit that trains people in Rwanda." Sphero, who is in the top 10 XTC 2016, is based in Boulder and got help turning their robot into a business by impressing Disney's CEO, Bob Iger enough, they created the cool BB-8 for Star Wars Awakens.
What stands out this year is the quality and diversity of entries from Syria to South Africa, Ireland, Iceland and more. "You learn about issues that entrepreneurs are trying to solve in more countries. A Biometric Tech company in Syria is trying to solve baby kidnapping - biometric tech can resolve that." Extreme Tech Challenge offers exposure and inspires people to create their own economic independence to solve their problems through innovation in technology and entrepreneurship.

The 2016 Top 10 semifinalists range from the more-familiar to the veritably unknown. They cover an immense variety of topics featuring entries from cutting-edge RNA cancer-fighting research company Genomic Expression, food intake analysts SmartPlate, robotic technology from two distinct participants MegaBots, Inc.. and Sphero, wearable prenatal analytics developed by Bloom Technologies, and even touching on the edgy topic of the cannabis legalization with a social network platform created by MassRoots. Rounding out the Top 10 semi-finalists are Captive Media, Kickfurther, GIROPTIC, and Sixense Entertainment, Inc. whose focus on creating the only fully immersive Virtual Retail shopping platform has catapulted them to the top of the list of contenders for this year's competition. CEO of Consumer Technology Association Gary Shapiro, Founding Partner of Pacific Investments Veronica Serra, and venture capitalist Tim Draper among many other top names in technology form a panel of expert judges. They will decide on three finalists who will go on to present on Necker Island, Sir Richard Branson's residence on February 11, 2016 for the chance to receive infrastructure and investment for their business endeavors. Good luck to all the semi-finalists pitching on Friday, Jan 8th, 2 - 4pm at the Venetian Bellini Ballroom, you can see them during a live global broadcast check the website for more.

As a collector of wishes, I asked startup queen Kym to make hers for the launch of the Techs and the City Series, the first for this New Year - happy 2016.

#1 Personal Wish If everyone stopped for a minute and held themselves accountable for their own happiness. People blame others for stereotypes or discrimination. I was the first female in San Francisco to host a racing show. It does not feel good to be a victim - what if I could succeed anyway? My personal wish is to feel empowered, get out of your own way and break the habit blaming everyone else.
#2 Work Wish for Extreme Tech Challenge I want to increase the global reach to 100 countries. I want a greater concentration of startups.
#3 Tech Wish Technology is designed for how people are and guide them where you want them to be.