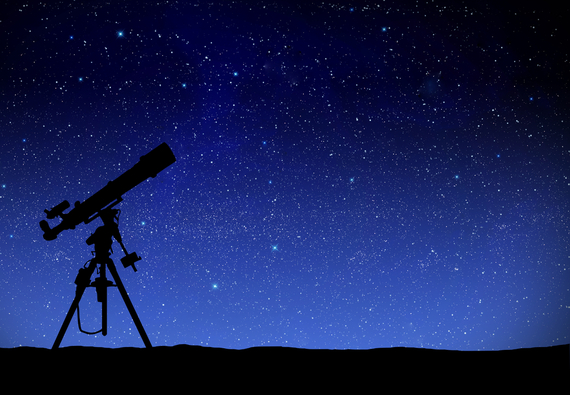 Space nerds know that high-quality astronomy apps are few and far between. For a long time, the only popular astronomy app was Google's SkyMap, but now Google Play and the App Store are bursting with options for everyone from the casual stargazer to the more seasoned observer. Here's a breakdown of the best space apps available.

It's amazing this app is free. Like a lot of other astronomy apps, Cosmos provides a GPS-enabled star chart; simply point your phone in the direction of the sky you want to examine or search for the name of a star. What makes this app unique is its polished design (it makes a sweet swoosh sound when you zoom in on an object), its endless amount of customization options, and its wealth of information on anything in the night sky with tap with a finger.

Celestron, the hobby science company, has released some official Cosmos branded gear to accompany the app that includes a Wi-fi enabled telescope you can control through your smartphone. that will set you back a cool four hundred dollars.

Planetarium is an astronomer's multi-tool. Less beginner friendly than our top choice, it has a no nonsense UI that crams in essential information for night time observers and offers an astronomical clock, a Google map, a line graph, a solar system map, two GPS-enabled night object finders, and an updated calendar of night time phenomena. This app goes for usability over polish, and succeeds with its own humble design. It would be at the top of the list however, it's only available on Android.

Night Sky Tools aims to be the ultimate digital reference for an astronomer. Like Planetarium, its UI is minimal and aims to help you become a better astronomer. It is both a digital textbook and toolbox. It provides information on viewing every imaginable object in the sky, and also provides special tools for calculating things such as focal ratio for astrophotography and weather reports for viewing conditions. It includes almost every sky object catalog and a section of tools devoted to deep-space objects. It has (almost) everything!

PlanetDroid is an app that will make your friends think you're an astronomy genius. Its main menu consists of a minimal line chart followed by a dark screen with coordinates for telescopic observers. It also includes a sky map with an AR interface, a unique feature that places it near the top of this list. Like Planetarium, the sky map has an interface that will make you feel like you're playing a video game from the late eighties. Suggested for the seasoned observer.

Similar to PlanetDroid, the main draw of SkEye is its ease of use and simple design. A sky map with practical graphics, it provides astronomers with the appropriate coordinates for stargazing. We appreciate the app's little touches not found on other apps including a choice to change the color theme to "dusk", a feature that monitors your battery, and an app tutorial.

Earth Now is an app created by NASA for the climate-change minded. Sourced by real time satellite imagery and measurements, the app shows 3D Earth models of its "vital signs": air temperature, sea salinity, carbon monoxide levels, gravity field, ozone, sea level, and water vapor. Some measurements come with an animated option, so you can do things like watch the northern hemisphere ooze a swirly vortex of CO2.

These apps reveal the location and status of the many satellites floating in our orbit. Satellite AR (for Android) has numerous choices for what you can see using its AR sky map, from amateur radio satellites to the ISS to Sirius XM. Satellite Tracker (for iPhone) has more limited options, but should still provides some interest to the satellite junkie.

This app alerts Google Glass users when the International Space Station is viewable in their area. It's just one of those things that makes you put on Glass and go, "I am living in the future, and I am freaking out."

Last on our list is something for the heliophiles. This NASA app offers a look into their Integrated Space Weather Analysis System (iSWA), which allows the user to look at computer model images and data regarding the sun's behavior and its effects on Earth. Meant for serious astronomers, a beginner can still glean some understanding from options such as its bright yellow Automated Solar Activity Prediction (ASAP) images, which provide near real-time predictions for when the sun might be spewing out massive amounts of radiation and plasma in our general direction.

Are there any apps we missed? Let us know in the comments. Astronomy nerds unite!