video made by Romina Penate

Earlier this year we told you about TentEd, an humanitarian project started by three Iraq War veterans delivering school supplies to Syrian Refugees in Kurdistan in partnership with EPIC, a non-profit working to support a peaceful Iraq. TentEd's co-founder, Zack Bazzi, recently produced a short video about the project and is now preparing a return trip to the region in December. Since the first TentEd visit to Kurdistan, a lot has changed in the region so I sat down with Zack recently to find out what he sees has been accomplished and what he thinks he can get done with another visit to the region.Tell us about how much you were able to fundraise for your first trip this last summer and what you were able to accomplish? (Include metrics, numbers of backpacks delivered, schools helped, children served)I landed in Erbil, Iraq on 7 June. Two days later, Mosul, Iraq's second city, fell to ISIS. Needless to say, it complicated the project. I assessed the situation with my teammates back in the U.S. and we decided that I would stick around and see the project through. The Kurdistan Region of Iraq where I was is pretty stable and secure, and it is defended by a wall of hardened Peshmerga warriors. I was pretty comfortable with that decision.

I ended up staying in the Kurdistan region for a little over a month. It turned out to be a pretty productive stint. In just a few weeks we:

1)Stocked the Afreen Elementary School (in Domiz Refugee Camp) Library with 300 Arabic books2)Purchased teaching supplies, stationary and furniture for the Derek Secondary School (also in Camp Domiz).3)Funded three months of bus transportation for children who could not afford it at Garanawa Elementary School in Erbil. 4)Provided school uniforms for 200 girls and boys and badly needed shoes for nearly 100 first and second graders.5)Distributed 200 stationary kits. 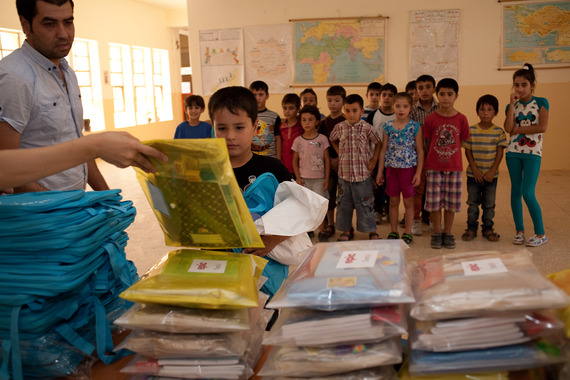 A lot of people would look at your work this last summer and I think be congratulatory for your efforts but with the headlines now discussing ISIS, why go back, are you afraid?I'm going back because there continues to be a clear need for the sort of support that TentEd can provide. I also have many dear friends from all faiths and backgrounds in Kurdistan and so I'm going back to visit them. TentEd is not just a humanitarian project. It's also a personal initiative. Frankly, it's tough to figure out where the project part starts and the personal one begins.

The concern about danger is understandable, although, it is important for people to understand that the Kurdistan region in Iraq feels like a separate country all together. It has its own government, parliament and security forces. It's fairly secure and stable and I feel very safe traveling throughout that region. I ALWAYS present myself as a proud American veteran--never an issue. The people of Kurdistan love America. I think we should show them some love back.

Regarding risk, that's something I think about on a routine basis. One mantra that stuck with me from my Army days (also my favorite) is this: we don't avoid risk. We manage it. I think that's also a good way to live life. That's all the philosophy you'll get out of me!

You going back to Kurdistan, and you being in graduate school at Georgetown, brings up natural comparisons to Austin Tice, the Marine Combat Veteran who, while on summer break from law school went to cover events in Syria and has now been missing since 2012 (http://www.thedailybeast.com/articles/2014/05/03/war-nostalgia-is-leading-veterans-to-places-like-syria-one-marine-never-came-back.html). Some have labeled his return as 'war nostalgia'. Does war nostalgia factor into your decision to go back to Iraq? No.

I've been out of the Army many many years now. I loved my time in uniform and if you ask me if I miss it sometimes, the answer is a definite yes. Most former soldiers will answer in the same way. I miss patrolling the mountains in Kosovo with 100 pounds of gear when I was deployed there with the 101st. And I miss the electric thrill of a firefight in Iraq and the extraordinary beauty of the Hindu Kush Mountains in Afghanistan.

All that is normal and healthy. But I'm also very comfortable and content being a reintegrated citizen. When the uniform comes off, it's time to move forward. I certainly don't live in the past. 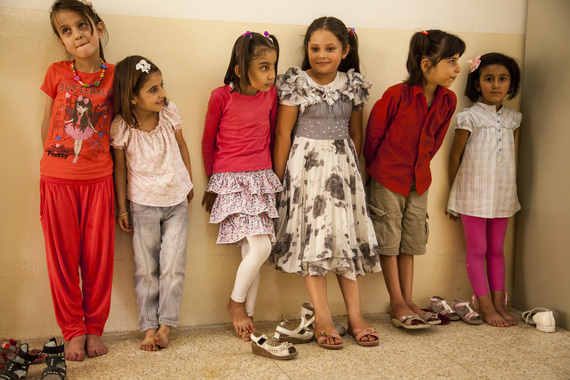 You don't take a salary for your work, so why not just send the funds raised here to do the same work and be administered by someone already in the region?It's very important for me to maintain the trust with TentEd supporters and donors.It frames every action and every decision. And crucial to maintaining that trust are two things: accountability and responsibly. As the person who oversees TentEd, I believe that it is my responsibility to personally implement the projects and ensure full accountability for each dollar invested. Our generous funders deserve nothing less.

Do you see any near term solution to the refugee crisis in Kurdistan? How long does TentEd need to continue?Given the historic nature of what's happening throughout the broader Middle East, the demographic fracturing of Syria and Iraq and the intensity of the regional Shiite -Sunni rivalry, the refugee situation in Kurdistan is not likely to improve any time soon. Iraqi Kurdistan will continue grappling with wave after wave of refugees trying to escape the violence that's plaguing their communities. It's not a rosy predication, but that's the reality right now. This is why it's so vital now more than ever to support organizations that are trying to ease the situation.

To the second part of your question, I'm currently enrolled in an Emergency Management master's program at Georgetown University. The challenge is to balance school demands with the responsibilities of TentEd. So far, it's been a good balance. I plan to continue doing the occasional TentEd trip to (Iraqi) Kurdistan as long as I can maintain that balance.

What are your long-term goals professionally and with TentEd?TentEd is a program within the Education for Peace in Iraq Center (EPIC). This provides the initiative a stable and very supportive home. For now it's one project at a time while I focus on grad school. After that, who knows!

What do you think the United States should be doing in the region to support a more stable Iraq and Syria?That's a very complicated question. And if I had a good answer, chances are I would not be a student at the moment! What's really important is for those of us in a position to do something, whether through volunteer work or careful donations, to try and do what we can when we can.

As we close in on the American holiday season, why should people give to TentEd?Because we're making direct impact on the ground in a place that urgently needs all the support possible. There is very little separating donated money from a school child who, to be frank, is not having the best winter.

I will be flying to Kurdistan in mid-December and I will spend my time there making sure that the $15,000 we raise is invested wisely and carefully. I can't think of a more appropriate and thrilling way to spend my holiday season.