I'm a bad man. I commit crimes, under the cover of night in strange places. I perpetrate heinous acts and then sneak the evidence out of hotels, buried deep in the recesses of my luggage.

This will surely be my last blog for the Huffington Post before they take me away and lock me up forever. I am ready to confess: I steal hotel towels.

And so do a lot of other people, judging by hospitality industry surveys which estimate that they lose 5-20% of their towel inventory in any given month. A recent Travelocity poll of hotel guests in the U.S. and Canada found that 85 percent of them had taken toiletries or towels from a hotel room. Wow, that's a lot. 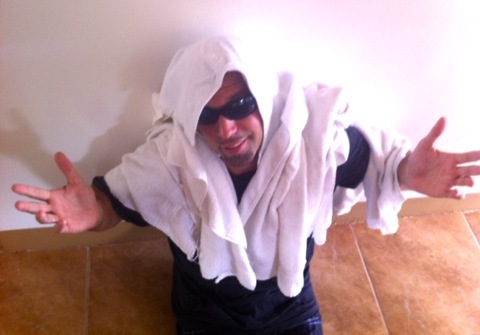 Is that just a cost of doing business for the hotels? After all they charge you seven bucks for a pint-sized can of Coke from the minibar and $24.95 for a "special" movie? (Not that I watch those kinds of movies, of course). In the game of laundered larceny it's assumed, and even encouraged that the guest will take the little bottles of shampoo, conditioners, tissues, soaps, pens and pads, on average costing the hotel about $3 per patron. Anything with the hotel name on it is considered cheap advertising if you wanted to take it home. But what's their policy on towels? Do they even closely monitor towels being stolen?

"No, we don't keep track," confides a former Senior Operations Manager at one of the world's most popular hotel chains, on condition of anonymity, "It's far more money in labor to do inventories on everything in the room. That's the uneventful truth of it."

Sooooo... it's open season on towels?

"We expect certain things to walk and actually build that into the rate per night for the hotel."

Interesting! Apparently it's easier (and less likely to cause a melee upon checkout) for them just to charge you a "replenishment fee" or "restocking fee" that they tack on your bill, often unnoticed.

Of course some sticky-fingered guests take it to the extreme, attempting to pilfer hairdryers, glassware, sheets, lamps, phones, flat-screen TVs and even Bibles (karma's gonna get you on that one).

The Operations Manager went on to tell me about one memorable thief:

I had what we would call a professional scammer from New York at my hotel a few months ago. Let me paint the picture: heavy set woman in her 60s, big blue hair, too much makeup, too much perfume, very thick New York accent and called everyone honey. When she checked in she requested 12 boxes of tissues (because she had allergies), 20 rolls of toilet paper (because her husband had digestive issues), 30 bottles of shampoo (because she had thick hair), 12 rolls of paper towels (because she cleans a lot), and 30 coffees (because after all, they are from New York). They were tolerated for a while until they became nasty to the staff and then the charges were simply added to their bill... and then some.

The hotel industry has fought back; a Miami-based technology company invented a Radio Frequency Identification chip that can be implanted in hotel towels, robes and sheets that triggers an alarm if carried off the premises. Its real intention was to monitor linen inventory, but in theory it could act as a deterrent to hotel towel theft. So far three unnamed hotels in Honolulu, Manhattan and Miami have introduced the system. Wow, three hotels? So if I want to continue my career as a criminal I just have to choose from the 11,928 that haven't installed the chip if I want to keep taking towels?

Don't laugh -- it could get serious. A woman in Nigeria faces three months in jail for stealing two towels from her room at the Transcorp Hilton Abjua Hotel. She was arrested, tried and sentenced to spend three months incarcerated or pay a $20 fine.

We're setting up an international amnesty campaign to collect money for her legal defense. It will be a long road, but with your help and commitment we might... oh, wait... we just received good news: our first donation has come in! And we've reached our goal of $20! That didn't take long. Ok fellas, take down the bunting and tell the band to go home -- this telethon is officially over.

Damn, they send people to prison for stealing towels? I can picture my first day in the joint talking to my cellmates:

"Stole a car from a nun and then lit it on fire. And what are you in for, new guy?"

"Me? I stole the little towels from the hotel," I'd say. "They had the cutest little frilly edges and were sooooo soft!" Not exactly helping my street cred. Even the guy serving time for ripping the tag off his mattress would try to steal my fruit cocktail.

I shudder to think about it. All this crazy talk might just scare make me change my ways. Maybe there is hope for an old hotel towel bandido like me? Maybe I'll reform and even start paying my taxes and flossing every day? Yup, it's time for me to wipe the slate clean and start living an honest life. Now if I could only find a towel...