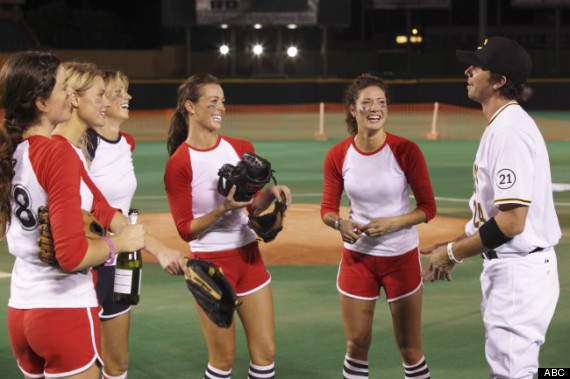 Note: The following contains spoilers if you have not seen Season 16, Episode 5 of ABC's "The Bachelor."

Buenos días, "Bachelor" fans! Week five finds us in beautiful Puerto Rico where Ben is going above and beyond to prove that he is ready to find love while wearing only henley shirts from the cool side of the color wheel. In this episode, we were reminded that black underwear shows through white linen pants, all life's goals can be accomplished by the age of 24 and contrary to popular belief, courtesy of "A League Of Their Own" ... there is crying in baseball. I've narrowed the brutal two-hour beating of a show into six memorable one liners that will help you navigate all "The Bachelor"-related topics of conversation of the day. You're welcome.

1. "It's raining gatos." -- Ben
Ben and Nicki were caught in what could have possibly been the early stages of a tropical storm during their one-on-one date. Since Ben is super witty and moderately skilled in conversational Spanish, he zinged the audience by declaring that it was raining "gatos." I was unsure why it was only raining cats instead of cats and dogs, but whatever. The point is that the two were soaked to the bone and Ben's hair never looked better. One can only assume that Mother Nature was horrified by Nicki's toga-inspired dress that was more than likely purchased from the naughty Cesar section at Party City and she unleashed all her powers on the entire country so Ben had no other choice but to stop at a local shop for them to change into dry clothes. I bet Mother Nature's head was shaking in disbelief when Nicki decided to tie a table cloth around her neck and call it a dress and Ben showed up wearing white linen from head to toe, including a fedora. Olé!

2. "COME ON, B!TCHE$!!!" -- Kacie B.
Who knew that Kacie B. was such a competitor? She's a machine on the baseball diamond with a glove as well as the 50-yard-line with a baton. The group date was split into two baseball teams, each vying for the chance to win a super romantic beach date with our "Bachelor." At first, I was shocked at how many of these women actually hit the ball, but then I saw Ben was the pitcher and he was lobbing them over the plate so slow and arched that my 97-year-old Mimi would have been able to make a connection. Apparently, the game was a nail-biter and Kacie's battle cry for her fellow red teammates was the ever popular and dainty, "COME ON, B!TCHE$!" Southern charm at is finest, y'all!

3. "I've pretty much done everything in life that I want to do and I'm tired of being single." -- Elyse
Poor Elyse. After dressing in her most sophisticated "Jersey Shore" outfit, she completely bombs on her one-on-one fancy yacht date. She admits that she's done everything in her life that she can at age 24, and is tired of being single. Obviously, this raises more than one red flag with our Bachelor. "You mean there's nothing else you want to do? You're just here because you're tired of being single?" She answers, "Of course not. I'm here because I'm ready to get married." Party foul, Elyse. Drop and give me 20.

4. "Are you going in the water already nude?" -- Ben
Yes, Ben. Typically when skinny dipping, you go into the water nude. How fortunate that Courtney just happened to be at your hotel door in nothing but a robe so you could check "go skinny dipping with a model" off your leap list? Winner.

5. "Tread lightly. I'm just saying ... be careful." -- Ben
Emily apologizes for last week's outburst about how Courtney is nothing but a poser who is here for the wrong reasons. Ben is happy to hear that she has come to her senses. Emily smiles and then confesses that she still stands by her opinion and then proceeds to talk about Courtney again for another five minutes. Ben becomes frustrated and tells her that she doesn't know anything about the importance of leap lists and how certain things need to be checked off before his 30th birthday so just back off.

6. "Jennifer, I'm sorry. Take a moment to say your goodbyes." -- Chris Harrison
It was probably the most dramatic rose ceremony we've had in a while. All six people watching at my house screamed interjections at the television at Ben's disposal of the coolest girl in the bunch. She had an unfortunate exit interview that included choking sobs peppered with hiccups and bouts of ugly crying that I choose to forget. Such a shame. It looks like I'm rooting for Blakely and her new found epiphany.