Today marks the 150th anniversary of the beginning of the Battle Of Fort Sumter. "Rebels" -- or as I like to call them, traitors -- launched this attack which led to the Civil War, an attempt to permanently destroy the United States of America. It is the most painful and raw and fascinating period in American history and the stream of books and articles and works of art about the Civil war continues unabated. President Abraham Lincoln alone has been the subject of so many books it could fill a good-sized library. I once saw a movie or play or read a book in which a character was described without hyperbole as having read every single book on the Civil War. That is literally impossible to do today and grows more impossible with each passing year. (It's impossible to read 20,000 volumes; it's even more impossible to read 40,000.) But that shouldn't stop you from trying. Here are some of the new books, albums and reissues of classic TV works on the War of Southern Aggression. (Hey, they fired the first shot!) 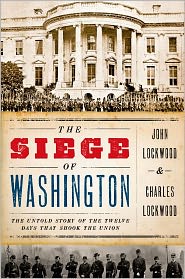 THE SIEGE OF WASHINGTON: THE UNTOLD STORY OF THE TWELVE DAYS THAT SHOOK THE UNION By John Lockwood & Charles Lockwood ($27.95; Oxford University Press) -- After the seizure of Fort Sumter, the entire country held its breath. Washington DC was surrounded by states either seceding from the Union or liable to do so. It was virtually undefended and any rebel forces could saunter into town, seize power and quite possibly imprison or even hang Lincoln and any Northern politicians found there. Lincoln called for troops from northern states to come protect the nation's capitol. But who would get there first? Northern troops loyal to the country and the rule of law? Or traitors who had potentially seized a massive cache of weapons at Harper's Ferry? To make matters worse, Lincoln wasn't even sure any Northern states would respond to his call for soldiers. And DC itself was filled with traitors at all levels of government who sympathized with the South and spied for them or quit their jobs outright. This book by two brothers goes day by day, capturing the drama at every turn. Soldiers bivouacked inside the half-built Capitol building, the unfinished dome leaving them open to the night skies. Lincoln going amongst the few soldiers in town late at night, shaking their hands and offering words of comfort and praise. Riots in Baltimore when Northern troops passed through. Clara Barton -- who would found the Red Cross -- practicing her excellent marksmanship and being mocked and spat upon by fellow employees in the Patent Office who lined the halls to abuse her because she was a woman and intelligent and anti-slavery. Those are some of the vivid moments captured here, along with nighttime raids, hijacked trains and countless missed opportunities by the South. It's an entertaining glimpse of a key early moment in the struggle for this nation's soul. One negative comment: it won't diminish the pleasure for casual readers, but it must be a sad reflection of tightened budgets in publishing when even a book from a notable press like Oxford can be littered with missing or repeated words and phrases and other examples of copyediting. Maybe one advantage to ebooks would be the ability to send out a cleaner version at no cost even after a book has been purchased?

NOTE: Oxford University Press contacted me to say the errors in this book were the result of a miscommunication between editors and the printers; changes that were intended to be made got lost in the shuffle on this project. All changes will be corrected in later editions. They were glad these errors were not taken as a reflection on the authors and the work at hand and insist it was a one-off error and not reflective of OUP's quality control in general. 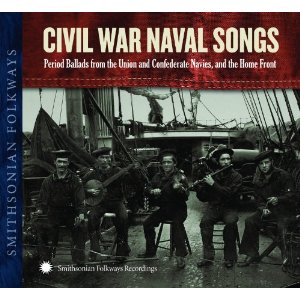 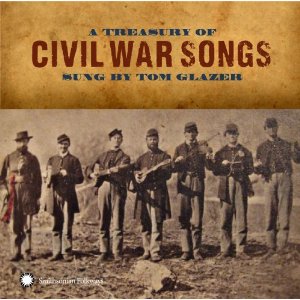 CIVIL WAR NAVAL SONGS ($15 for CD; $10 for MP3; Smithsonian Folkways)
A TREASURY OF CIVIL WAR SONGS ($15 for CD; $10 for MP3; Smithsonian Folkways) -- One new album and a classic reissue provide a wealth of Civil war-era music. You don't think about the sea very much when it comes to the Civil War, but there's a lot more to heard than just "The Monitor & Merrimac" apparently. Singers Dan Millner, David Coffin and Jeff Davis (!) perform tunes on Civil War Naval Songs like "The Blockade Runner" and "A Yankee Man-Of-War" accompanied by period instrumentation. Treasury is a reissue of the 1973 folk gem by Tom Glazer that hits all the highlights you'd expect like "John Brown's Body" and "When Johnny Comes Marching Home." Both are ideal for Civil War buffs and folkies looking for unfamiliar tunes. 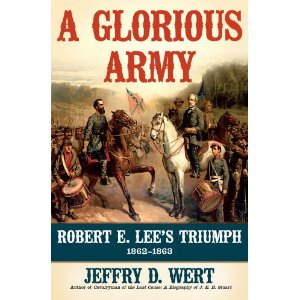 A GLORIOUS ARMY: ROBERT E. LEE'S TRIUMPH 1862-1863 By Jeffry D. Wert ($30; Simon & Schuster) -- Ironically, the book from the academic press OUP is perfect for a general audience while the book from a more general press (Simon & Schuster) is really for hardcore Civil War buffs. Wert focuses on the year in which Lee first took command of the traitorous Confederate Army bent on splitting asunder the United States forever, leading it to one victory after another. Wert's prose is accessible and clear. But these battle-by-battle accounts, along with his carefully judged opinions backed up by quoting from diaries and letters at the time or memoirs written later and other sources, will delight mostly those who savor every twist and turn of battle or debating the what-if of Glendale (where a mortal blow might have been struck against the Union Army). Wert's judgments are sober and convincing. He also paints a picture from the start of a military campaign that was ultimately doomed by forces beyond the control of Lee or any General. (The North's advantages in factories and men, to name two.) It might appeal to one more audience. Anyone who insists on calling this event The War Between The States might very well enjoy a book that records one triumph after another and ends with Lee's victory at Chancellorsville. 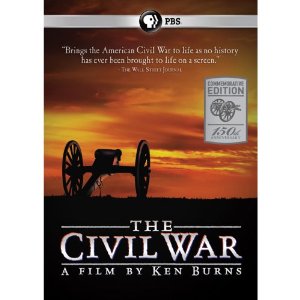 THE CIVIL WAR: COMMEMORATIVE EDITION ($99.99; PBS) -- It's only fitting that the most wrenching event in US history should inspire one of the most important works in television. The Civil War by Ken Burns is simply a landmark, an epic of documentary filmmaking that has inspired virtually every work that has come in its wake and -- let's not forget -- exceptionally entertaining. You were surely reminded of that if you watched even a minute when it was rebroadcast last week. Just seeing a moment can suck you right back in again. Yes, it's educational and informative and rigorous in its scholarship. But it's also funny, tense, exciting, tear-inducing and inspiring, both as art and for making clear what a noble cause the war truly was. It may have been tragic and painful on personal levels, but it was also our nation's defining hour. And nothing captures that better than this film.

NOTE: Michael Giltz is provided with free copies of DVDs, books and music to consider for review.