There are a lot of music festivals out there, from big names like Lollapalooza and Austin City Limits, to smaller fests like this summer's Electric Forest and Governors Ball - yet few challenge your mind and body quite like this past weekends Snowball Festival in Avon, Colorado. Sure, Bonnaroo is boiling, and Coachella, well it's full of hipsters, but the Inaugural Snowball Music Festival tested one's ability to brave the cold in the pursuit of music, and brave the cold we did. 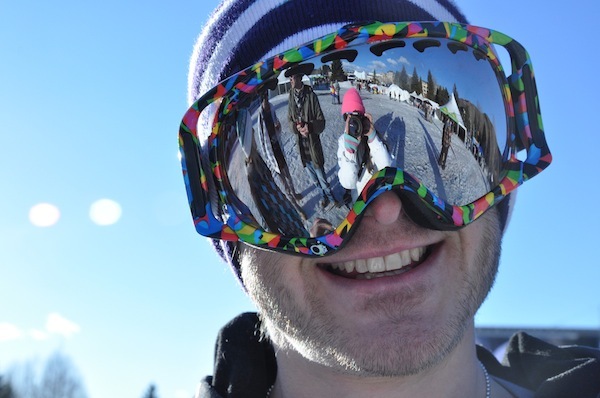 Colorado's own Pretty Lights took to the main-stage on Friday, kicking off the three-day festival with a roaring crowd in the small mountain town of Avon. Yankee-hat clad Derek Vincent Smith was happy to be home, and thrilled fans with favorites like "Something' Wrong" and "Finally Moving," newer tracks like "Hot Like Sauce" and classics like Pink Floyd's "Time." The most impressive aspect of the show was the sound quality, which for a newbie festival was impressive. His syncopation matched his stellar LED, laser light show, and set the "party" mood for the rest of the festival.

Pre-Pretty Lights a slew of DJ's and artists took to the smaller stages. The Groove Tent housed some serious spinners throughout the day including Zeds Dead, 12th Planet and Diplo. The Zeds Dead duo was a complete surprise; their dubstep/electronica mix warmed the crowd (literally) as the Groove Tent turned into a steam room. Their energetic performance prepared festival goers for 12th Planet. Known for his mix of hip-hop and dubstep, 12th Planet played a passionate set and also gave us a laugh or two as he covered his face with a beanie and commented on the overly clothed-girls. The casual nature of the whole event was refreshing. Diplo carried on the lighthearted spirit and let a herd of fans join him on stage, resulting in a scene reminiscent of a high school prom. Surrounding the DJ booth, cheering him on, snapping pictures - it was a moment that could only have happened at a first-year festival, and one that left festival goers feeling "lucky to have been there." 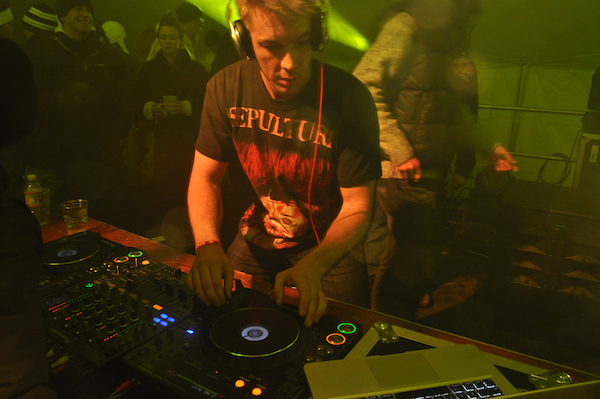 Diplo wasn't the only one to mingle with the fans. Edward Sharpe and the Magnetic Zeros all but made love to their loyal following as the sun set on Friday night. The 10-member indie collective from L.A. had the crowd hugging and dancing to a smooth, joyful set that included "Janglin" and "40 Day Dream." Cuddling in his coat and jumping into the crowd, frontman Alexander Ebert (not to be confused with fictional character Edward Sharpe) seemed passionate about this performance. The Local Natives joined them on stage as they closed down the show with a lively performance of 2010 cult sing-a-long "Home." 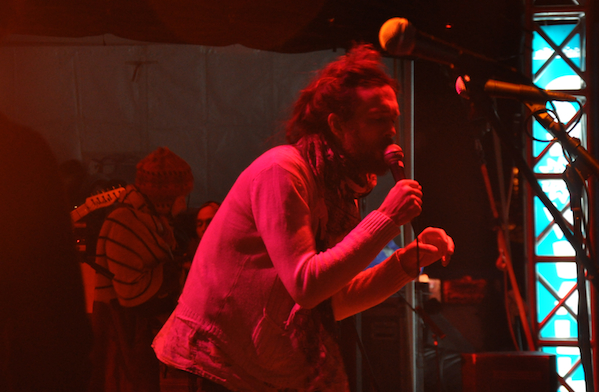 By day two fans knew what to expect. They arrived earlier; dressed warmer and planned their schedules better as big names like Bassnectar and Savoy were on tap. The main stage area turned to ice and had fans gliding into spots to catch The Local Natives. From their beautifully harmonized performances of "Airplanes" and "World News" to the Colorado reference that got the local crowd wild in "Who Knows, Who Cares," The Local Natives provided the perfect indie counterpoint to the DJ-heavy day 2 lineup.

The Groove Tent held back-to-back sets by Paper Diamond, Classixx and Savoy. Alex B. aka Paper Diamond played directly off his iPad wowing fans with his techy skills and groovy beats. Classixx followed with a laid-back, loose vibe; as the duo dropped classics (pun intended) like old school Earth, Wind and Fire, the Groove Tent began to sweat, actually sweat, from the mud-covered, overheated crowd. 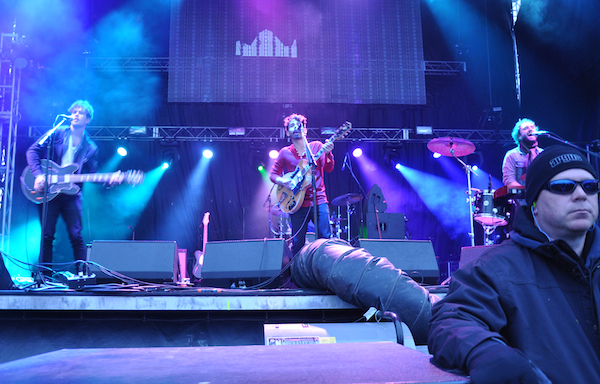 As Savoy began his much anticipated set on Saturday, there was no room for movement in the already packed tent. The duo opened with "Intro" by The xx and that was only the beginning. The Boulder-based band intrigued the crowd with heavy bass, hits like "We No Speak Americano" and an inspired light show that turned the tent into a planetarium. Fans came for Savoy, and it was easy to see why they're gaining serious traction (they've been confirmed for Ultra Music Festival in Miami). Also hot off a hugely successful year, Lorin Ashton, otherwise known as Bassnectar, closed down day two on the mainstage with a downright funky set. From "Pink Elephants" to his Gogol Bordello mix, fans grinded to the gritty sounds as political jargon and old-war footage flashed on the massive LED screens. He ended the night with a dubstep remix of Ellie Goulding "Lights" as the lights went down on an epic day 2. 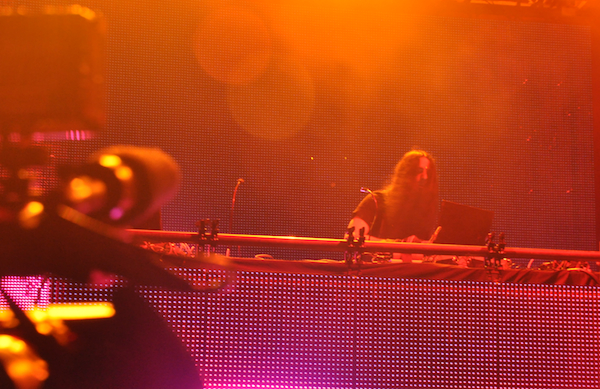 The final day of Snowball Music Festival featured Portugal, The Man, Miami Horror and the Flaming Lips who are no strangers to the 'Rado scene. They headlined the Monolith Festival a few years ago, and before that played the Unlimited Sunshine Tour -- both at Red Rocks Amphitheatre. Yet this performance was one for the record books. Forget the music, the show was in fact a show, complete with Coyne's trademark space bubble, confetti balloons, butterflies, caterpillars and even some stage-size lady parts. 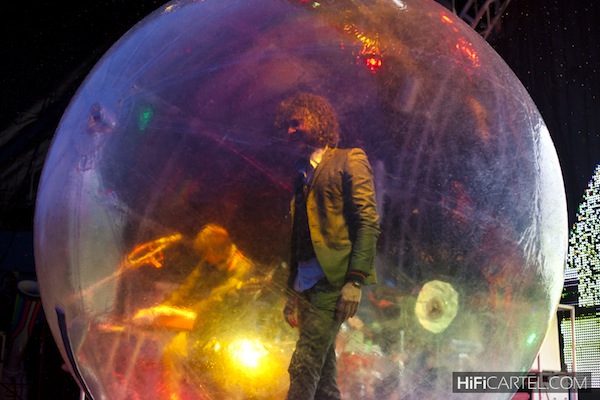 Snowball Music Festival had an energetic buzz in the air and a cool, casual vibe. The festival captured the spirit of a private house party and from the small tents to the in-town after parties, fans got an intimate, truly passionate experience. The performers wanted to be there and from local acts to the big names it was evident that Snowchella was a labor of love, for Chad Donnelly and the developers, the artists and the shivering fans. The pros -- the VIP Pop Chips heated tent with bean bags, the psychedelic art and ice sculptures and the easy schedule which left ample time for stage hopping; The Cons -- freezing temperatures, icy ground and altitude adjustment were a bit hazardous. But all of these things are learned with time, and it's clear that Snowball has made an icy mark on the festival scene, and is sure to bring the heat for round two, in 2012. 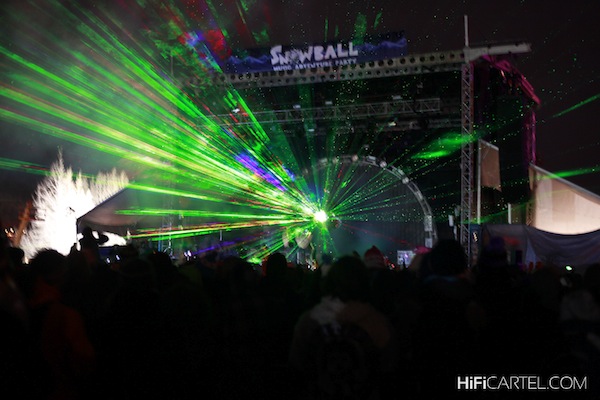