Traveling cross country from the Everglades in Florida to the Gila River in New Mexico last weekend, I felt like a visitor from the future, sent with a cautionary tale. Like the Ghost of Christmas Past came to warn Ebenezer Scrooge of the consequences of his actions, I used the story of our beloved, broken Everglades as an example of what could happen if the beautiful, historic wild Gila River was diverted and drained to satisfy "water rights." 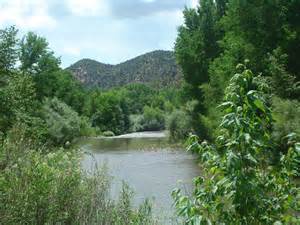 The legendary Aldo Leopold helped save the Gila River's headwaters as part of our country's wilderness heritage.

The contrast between where the two ecosystems started and where they are today is achingly real, and the proposed change is loaded with foreboding.

According to the South Florida Water Management District, historically, "the Kissimmee River meandered for 103 miles through central Florida. . .....Native wetland plants, wading birds and fish thrived there. ..(But) in the 1960s, the Kissimmee River was channelized by cutting and dredging a 30-feet-deep straightaway through the river's meanders. . .. More than 90 percent of the waterfowl that once graced the wetlands disappeared . . . After the waterway was transformed into a straight, deep canal, it became oxygen-depleted and the fish community it supported changed dramatically..." 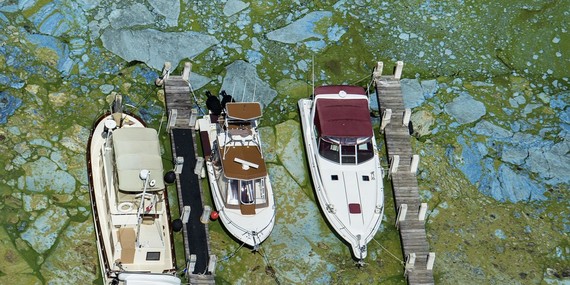 South Florida's reputation for pristine waters and beaches took a significant hit last summer with a widespread algae bloom resulting from destabilizing the Kissimmee River and its Everglades ecosystem.

The ultimate indignity for the mighty Kissimmee and the Everglades ecosystem came this year when the accumulated interventions resulted in a massive algae bloom discharged into the Gulf of Mexico and the Atlantic Ocean, dealing a severe blow to the health of the system, humans and the region's economy.

Conversely, the Gila Conservation Coalition which invited me to speak at the 12th Annual River Festival describes the river today thus:

"The Gila's headwaters were protected as America's first wilderness area by the legendary naturalist and outdoorsman Aldo Leopold... over 300 species of bird have been recorded; streamside habitat supports wildlife ranging from the reclusive mountain lion to the threatened loach minnow, and no large dams impede the natural flow of waters. Sound like Shangri La? It is. . ."

So WHO in their right mind (?!) would propose to divert such a wonder and treasure of nature? According to the Coalition, "a small but influential group of farmers, business interests and the state water development agency are advocating for construction of a large diversion on the Gila River. Authorized to capture an average of 14,000 acre-feet of water annually, or double current withdrawals, this 'new' water supply is intended to increase crop production and urbanization in the region. Up to $128 million in federal subsidies is available to New Mexico to plan and construct this project. A water development project of this magnitude could severely impact the Gila's unique ecological and recreational values." 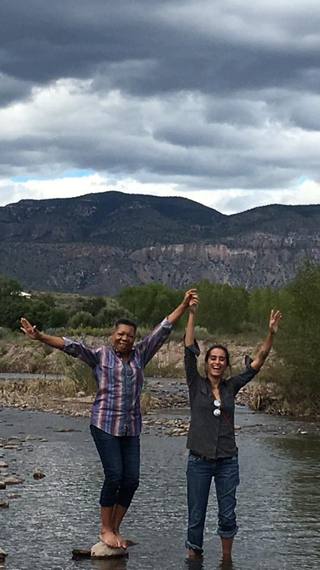 My new friend Maxine and her husband Adrian took me to their beloved Gila River where she proposed to him. They were married a week ago.

Standing on a rock in the burbling clear Gila River, I couldn't stop thinking how privileged I am to experience "Shangri-la" there, at George Washington Carver National Monument in Missouri which Superintendent James Heaney calls his little Shangri-la, and at my personal Shangri-la in Jamaica that I visited last month for the first time in 17 years. How short sighted and misguided it would be to compromise the Gila for the benefit of a few and the ruin of this beautiful, wild, elemental treasure.

Speaking at the festival that night I encouraged locals to cast a wide net that engages all the racial/ethnic, age and interest groups around the common interest of burnishing the jewel and keeping the Gila free for the benefit of this and future generations. I told them how, looking for an image of New Mexico's children to press the point that we need to save the Gila for them as Aldo Leopold saved it for us, I found a shocking barrage of negative information: For the third year in a row, the well being of the children of New Mexico ranked 49th in the country in 2015.

I suggested that there had to be other ways to use available funds to settle water rights and other claims so that all feel compensated. In an area where the economy is rapidly changing, including a decline in the traditional activities of ranching and mining, the river could be elevated as an eco-tourism attraction and a major economic driver. 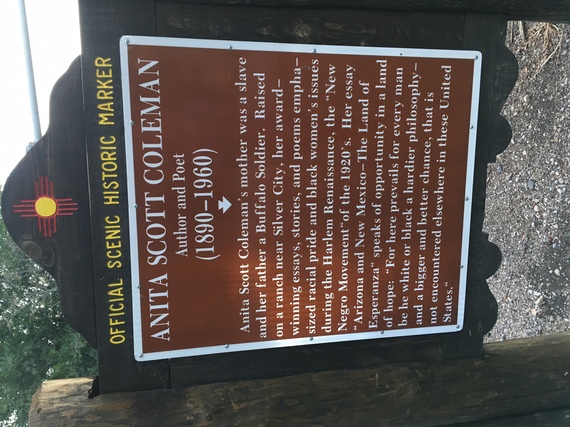 To get to the festival in Silver City required three different planes and a four-hour wait in one airport, but the first thing I saw as I walked down the street early next morning was a sign honoring "the daughter of a slave and a Buffalo Soldier." I immediately felt right at home. While many of my friends were celebrating the long-awaited opening of the National African American Museum of History and Culture in our nation's capital, it was good to know that our presence and contributions extended here and were recognized and celebrated.

At my talk members of the audience eagerly told me about the Buffalo Soldiers buried at Fort Bayard just outside town. I was leaving too early in the morning to visit, so I pledge to go back. Imagine my surprise when I arrived home to this e-mail announcing the NPS' Buffalo Soldiers Study and seeking public input until December 31.

Aldo Leopold warned us that "A thing is right when it tends to preserve the integrity, stability and beauty of the biotic community. It is wrong when it tends otherwise."

It shouldn't require genius to know that. How could our forbears including Leopold, born 1887, be so much smarter than we are today with all our vaunted technological advancements?

But across our country, our natural resources are under threat, from the National Park Service's Director's Order21 to the Republican Platform salivating to remove large swaths of land from the public domain so they can be exploited for the benefit of a few. It's up to each and every one of us to act in protection of our natural, cultural and historic treasures such as the peerless Gila River, its wilderness environs and the ecosystem of the Florida Everglades.