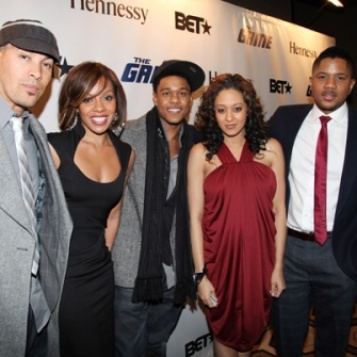 In an unprecedented move, BET has resurrected the popular and formerly canceled sitcom, The Game, and debuts its fourth season. Creator and executive producer Mara Brock Akil, and husband Salim Akil, who also directs and writes for the show owe it all to the fans.

"We're extremely excited... Mara always says how our other partner is the fans," states Akil. He also pointed out that the black community's been criticized for not using their voice to affect change in the media and states, "This time, they did." When it comes to the responsibility of BET to provide programming that viewers are asking for Akil adds, "They have." Creator Brock Akil shares her excitement about the resurgence of the show and states, "It's a big moment for us, it's a big moment for BET and for the empowerment of the fans. They're the ones who allowed us to stay on as long as we did on the CW." Brock Akil tells of how the fans "galvanized" when The Game was coming to an end on the CW and looked to BET and asked, "What are you going to do?" Well BET responded and took over the production of the series and Brock Akil hopes this will allow more quality black shows to have a home on the network. Akil agrees and wants to see a broad range of programming that resonates within the black community.

"I think I would like to see us have the opportunity to be as diverse as possible. We're not a monolithic people, and I think that's how we strike a chord with our viewers. We try to show all different aspects of African American people," states Akil. And in portraying the black experience Brock Akil had a lot of success captivating a female audience with Girlfriends, but The Game has now provided an opportunity to include a male perspective that has been well received among male fans of the show. Brock Akil says the secret ingredient of The Game is the "honest point of view from the women and the men." And this approach to creating a great show is part of the reason why Kelsey Grammer, (of Frasier fame), who many are surprised to learn is also an executive producer of The Game, (and Girlfriends), was happy to get on board to bring quality black programming to television.

"Kelsey was a smart man at the right time," Brock Akil states. She explained that Grammer owned "one of the few production companies that had a deal with Paramount that had development dollars," to create shows. Brock Akil quickly took advantage of this opportunity and pitched Girlfriends to Grammer, who loved it and was instrumental in getting the show on the air. Grammer has been one of the most silent of "silent partners" in the history of partnerships, allowing Brock Akil to remain in the forefront of her brainchild. And subsequently, Girlfriends and The Game have arguably become two of the most popular and culturally relevant black shows in television history. This season of The Game will continue giving viewers what they want by serving up juicy plot lines that are more emotional intense giving its actors a chance to display even more range, while preserving its signature quick witted and sophisticated comedy.

Akil explains that the show is "still funny, but we've always said to people that it's a 'dramedy'." Akil also credits BET for allowing the writers and producers the creative freedom to tell the stories in a way network television didn't provide, bringing more of the original vision of the show to fruition.

The fans have spoken and fortunately BET has listened. This season of The Game, with its cast of characters who engage in career threatening affairs, reality show shenanigans, paternity tests and "cougar" romances will not only entertain, but be a testament that the black community does in fact have a voice and that voice has the power to affect change. Game on!