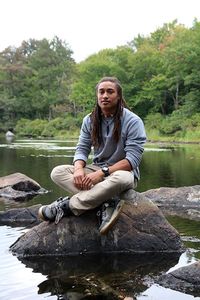 I sat there silently, swinging my legs, watching them bounce back and forth off of the couch. I was only 5 and my lack of words and eye contact produced an eerie awkwardness as I met my first babysitter. I shocked my dad with a question: "Daddy, is she a monster?"

A monster is defined as a creature that is typically large, ugly, and frightening. A five-year old doesn't need a dictionary to know that meaning. But what must one do to be seen as a monster? Spur genocide? Ruin a life or two, perhaps?

My Mrs. Bessie did none of that. She was around 70 years old that day when I first met her. She was about 5'4", caramel complexion, long black hair, but had only one finger on her right hand--the middle finger.

I regret those first impressions and the first moments of embarrassment when she picked up from my private school. It took only a week for her to become my best friend. She was also a loyal advocate, and a large foundation of my morality. I recall being upset one day because I knew I couldn't finish reading a science book I enjoyed by its due date; Mrs. Bessie used the one finger she had on her right hand and re-wrote the book with pictures while I was gone that afternoon.

After four years of steady babysitting, she developed a minor, but persistent cough. My mother suggested that she see a doctor but she always politely declined with the same rationale. "If I go to the doctor, who is going to take care of Brandon?" Ironically, I would soon feel like the monster when my mother shared the news. "Brandon, I want you to know that Mrs. Bessie has lung cancer and she may be fine, but she might not be as well."

I watched my life disintegrate in front of my eyes. Dumbfounded, I sat there and reminisced on past memories and the peculiar cough she wouldn't get checked out specifically because of me. I prayed for her to be healthy again. For the first time in my privileged world of caring people, tragedy ensued and I experienced my first taste of the real world. She was hospitalized and wouldn't eat any food at all unless I fed it to her. I came to the hospital to feed her everyday. It was hard seeing her weak while living by her motto, "don't worry, be happy."

My final moments with her were powerful and indomitable. I felt all the strength of her character flowing through me as I was called up to the podium to deliver my words at her funeral. At 10 years old, I read my poem titled "don't worry, be happy" to a crowd of hundreds at the New Jersey Performing Arts Center.

She died nine years ago yet her influence is still alive. Her tenacity was my model when I started a clothing line two years ago. Her legacy accompanied me throughout the years I attended a summer enrichment program held by the Johns Hopkins Center for Talented Youth Program. In the summer between my sophomore and junior years in high school, I went to Lancaster, PA to take an accelerated Physics class through the program. In three weeks, we explored and completed the syllabus covered in the typical high school A.P. Physics class.

As my father drove close to the school on the first day of the program, I wondered if we were traveling in the right direction because of the barren surroundings. Yet I approached Lancaster like I approach all new experiences: with an open mind and the intent of meeting new people and learning something new. I owe that perspective to the influence of Mrs. Bessie.

As we arrived and began unpacking, I was stunned by the looks of some students. Had they ever seen anyone with dreadlocks before? Some had seen few African-Americans in their lifetime; others just marveled at the sneakers I was wearing. Either way, I was judged. It was awkward at first. But I maintained an open mind and would meet some of my closest friends to date. Many of these new friends shared their shock that I was such a nice and fun guy who did not view them as lame or limited because they were white with rural backgrounds.

Her legacy accompanied me to high school with one of my toughest decisions ever: to leave a private school in 11th grade for a public school. As the recession hit in 2008, my family decided the public school experience was a better option. I remember walking into school on the first day, and being amazed at the diversity in the hallways. Initially hesitant to participate through pure shyness, I soon became more engaged than ever. I met people of all shapes, sizes, religions, and ethnicities and I wanted to meet them all; I even wanted to meet those labeled weird or odd simply because I saw their differences as distinctions and not as flaws. Leaving an overly nurturing environment was a challenge, but lessons from Mrs. Bessie gave me the ability to view the new world of public school with optimism. I expect to face many more transitions in life and, without a doubt, Mrs. Bessie will be with me through them all.