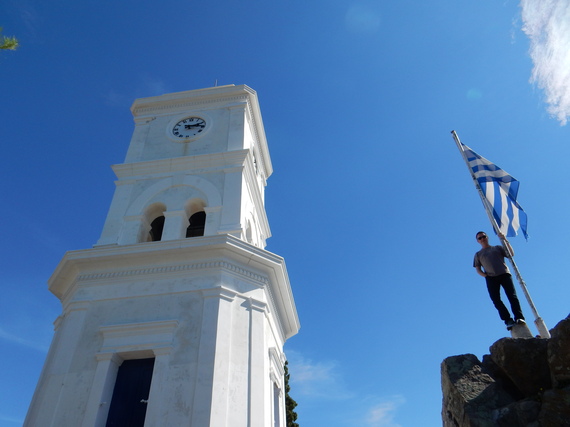 I recently visited Greece, and found myself face to face with the marvelous place that attracted more than 26 million tourists this year from all over the world.
Athens the capital, evokes the very origins of civilization. The city, its streets, museums, and monuments submerge the tourist in a time warp where history, mythology, and religion intersect.

The pilgrimage begins at the arc of emperor Hadrian, located on Leoforos Vasilissis Amalias Avenue that connects with the Temple of Zeus. We walked through the pillars that remain as evidence of what once was, weaving through the ruins that lead to the Roman bathrooms. There one can see the tubs that have been perfectly preserved and which were carved in marble 20 centuries ago.

From Zeus' sanctuary the acropolis can be seen in the distance. Almost six thousand years old, it sits on a great rock and towers over the city. We decided to climb the rocky slope that would take us up to the most visited place in the world, the place that proudly flies the Greek flag. 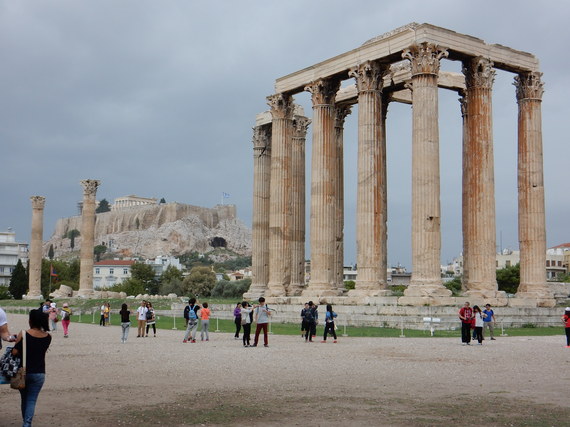 On our way to the summit we got lost in the streets of Anafiotika, a small, picturesque neighborhood built on the slope of the acropolis. Exploring Anafiotika meant getting lost in its streets, a colorful maze of small houses, streets, and an amazing view. 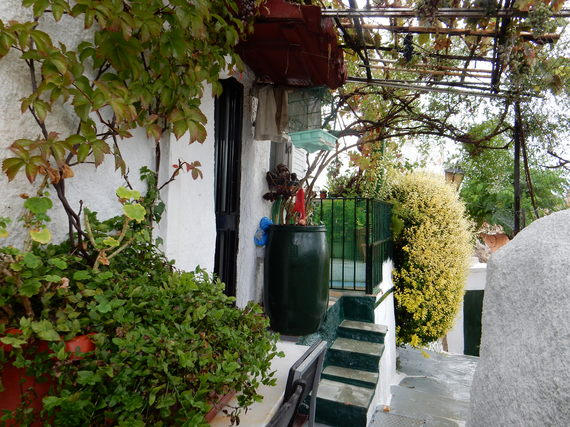 Later on we found the Dionysus and Odeon theaters, structures 25 centuries old in which theater was born, with the help of Aeschylus, who gave birth to the dramatic art. There debuted Sophocles, creator of Oedipus and Antigone, Euripides, creator of Medea, and Aristophanes, the father of comedy. 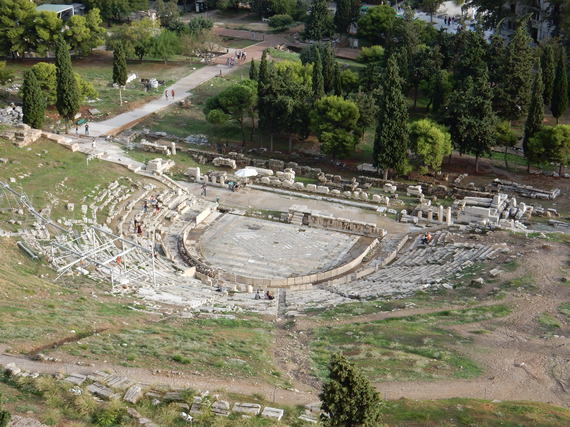 Exploring the incredible structures of the acropolis, visited in 2014 by 200 thousand people, we understood the magnitude and greatness that was this empire, for it was destroyed through the centuries by the Persians, Christians, Romans, Ottomans, and Venetians, yet it managed to rise time and time again from the ashes. 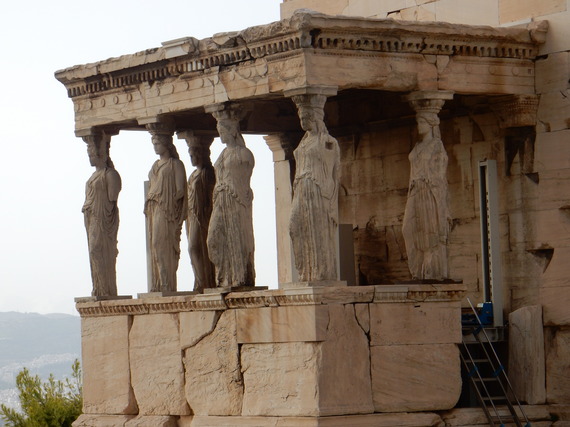 The projects to restore infrastructure in the acropolis can be interpreted as a message to humanity: that the Greek people do not give up in spite of what has happened to them. Fixing and preserving the monuments, so that everyone can enjoy them for centuries to come, is a powerful act that symbolizes the tenacity of this culture. 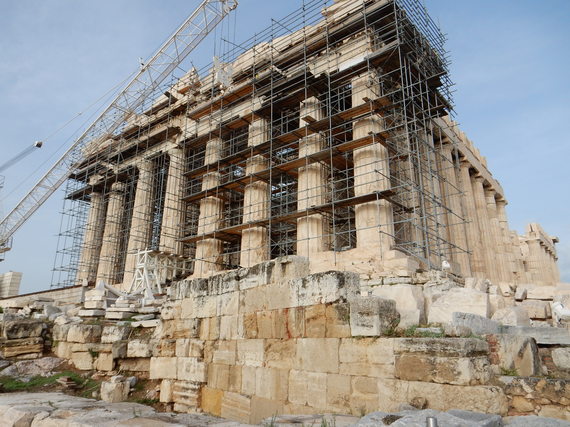 A tour around the Archeological Museum is necessary to understand how this benchmark of early civilization took its first steps in 7,000 B.C. Irene Pavlov is a museum guide who enticed us with her expertise and historical and mythical narratives in five languages. Hearing these tales on location made them more special when comparing the details of the lives of heroic characters with the testimonies carved into sculptures; art that has endured the turmoil of wars and kept its Greek splendor. 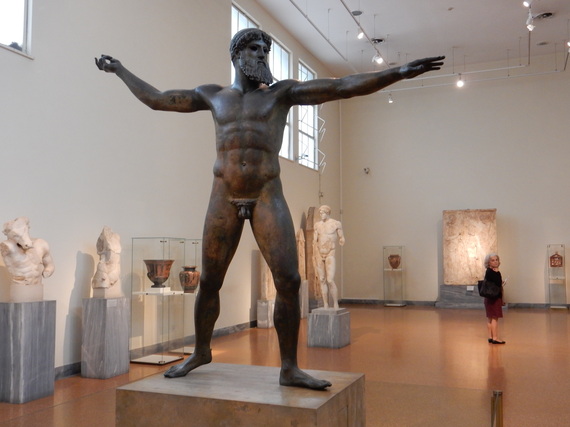 The Acropolis museum is a must-see, for there is where many of humanity's most precious treasures are. There you will find things like the original sculptures of the "Erechtheion Caryatids;" these show five young Greek girls gracefully dancing. The Erechtheion is where, according to their mythology, Athena beat Poseidon in a battle that made her the head goddess of the city. During the fight Athena jabbed her spear on the ground, and there an olive tree blossomed; this tree is considered sacred and can be seen in the Acropolis. 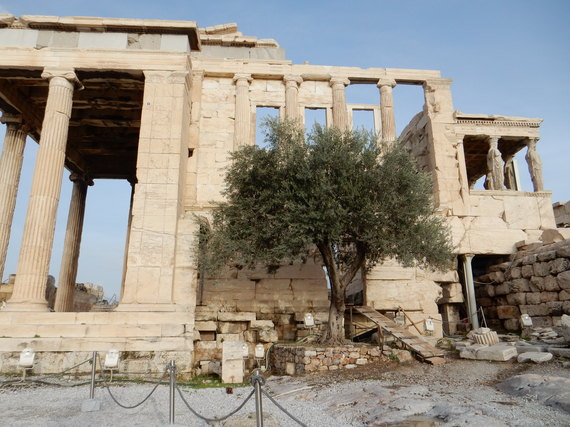 The Greek Agora, another of the treasures in Athens, was a central plaza in the past. This place was a crossroads on which philosophers, politicians, priests, and vendors crossed paths. We toured the Stoa of Attalos museum, which keeps a grand collection of art, and in which we found a small sculpture that, according to them, belonged to the great philosopher, Socrates. We also saw a collection of tiny ceramic cups that were used to give poison to those given the death penalty. 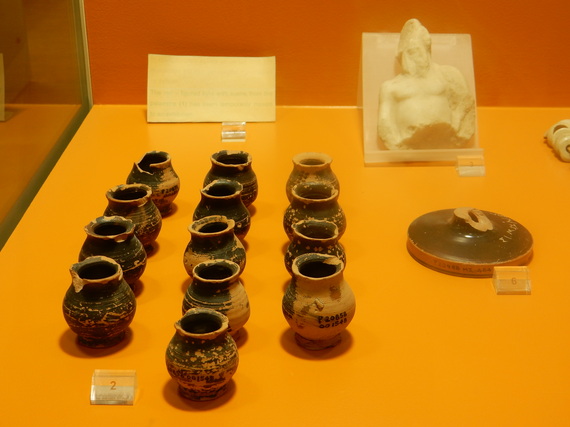 We explored the ruins of the Agora, starting on the platform that was designated for speakers. Through the ruins we found a state prison, the place where Socrates was incarcerated and executed; we remained there for a long time, soaking in the fact that we were touching the same ground that did the pioneers of democracy, philosophy, science, and art. 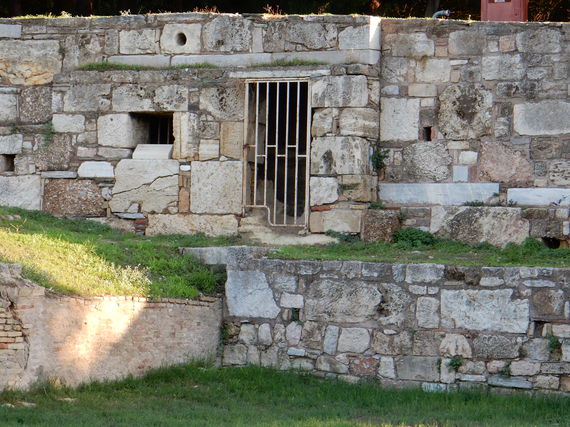 We continued our adventure towards the Cape Sounio, in southern Greece, where the Temple of Poseidon stands tall. Once there we contemplated the Aegean Sea, standing on the same place where, according to legend, King Aegeas committed suicide when believing that his son, Theseus, had failed at slaying the Minotaur. 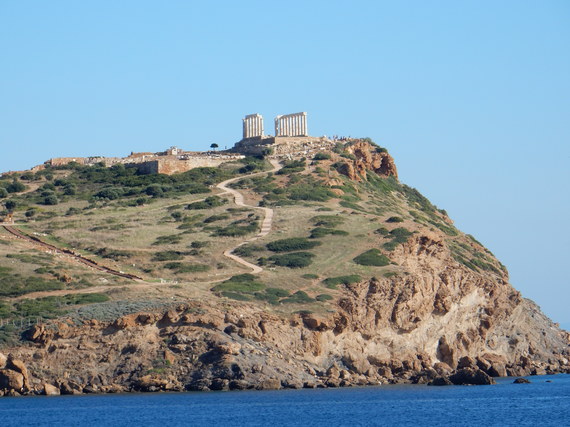 In Delphi, northern Greece, we arrived at the Temple of Apollo, located in the rocky mountains of Parnassus. There we saw the Oracle, consulted by many kings and aristocrats. Alexander the Great went there, as soon as he was given the throne, to ask about the future of his Empire, before he embarked on his campaign to conquer the world. 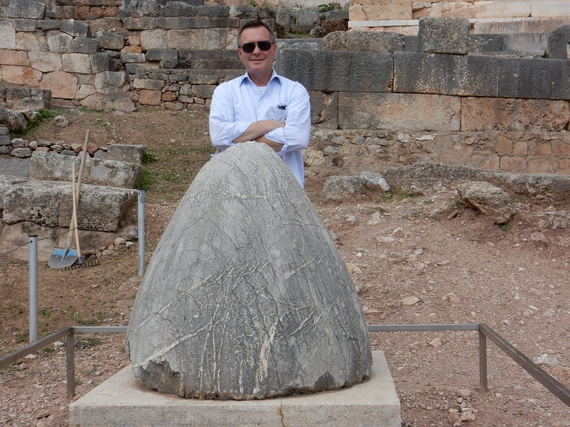 Observing the city from the Boutique Coco-Mat Nafsika Hotel, located in the north of Kifissia and owned by Mike and Vicky Efmorfidis, it's apparent that this great ensemble of monuments and history has even more culture to share: the narrow cobblestone streets are filled with musicians and vendors that fill the air with music and bring everything to life. 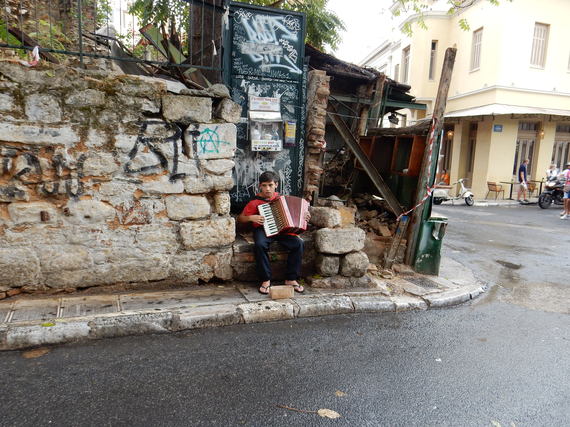 Houses are decorated with bright and beautiful gardens. People on the street that invite you into their stores, a normal but special gesture that makes you feel a part of the place. Walking through the city we saw many, many cats hopping and playing everywhere, bringing the city more to life, bright with joy, yet silent. 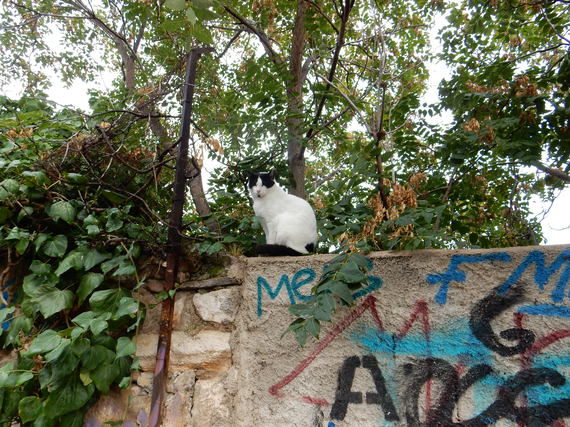 We visited the Hydra, Aegina, and Poros islands, three hours by boat from Athens. In Hydra tourists can ride donkeys and explore its narrow paths, where one will come to find diverse artisanal stores: full of ceramics embedded with gold. The mountainous views in Poros can be seen from a tower, where one can also see more of Greece's ancient infrastructure contrast against the blue Mediterranean Sea. In Aegina we found the temple of Aphaia that completes the triangle of sacred ancient temples: Zeus in Athens, Poseidon in Cape Sounio, and Aphaia. 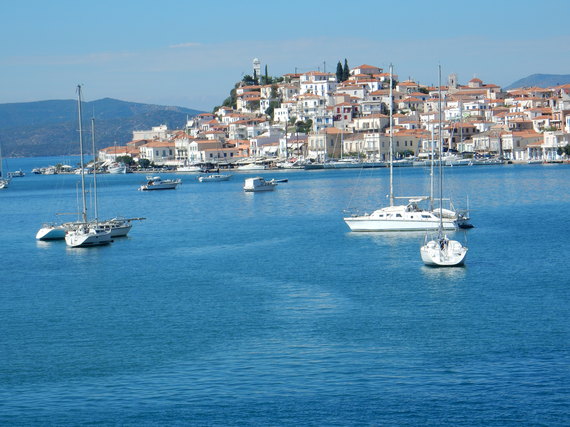 Our mystical trip concluded in the Greek islands, cruising through the Mediterranean, exploring the regions of Galatas, Corinthians, and Peloponnese, where Paul the Apostle revealed the doctrine of Jesus to the first Christians.

I took this trip with my husband, celebrating our anniversary, and I can attest that it is an unforgettable journey. Greece is alive and it's the responsibility of the world's citizens to get to know it, to speak of its wonders, visit it, and enjoy its grace. Lets recognize the ancient power of this great nation so that it won't collapse, so that it won't die. Visit Greece!