I cherish the notes I receive from my children -- whether they are scribbled with a Sharpie on a yellow sticky note or written in perfect penmanship on lined paper. But the Mother's Day poem I received last spring from my first-born daughter left a profound impact.

It was the first line of the poem that caused my breath to catch before warm tears slid down my face.

The important thing about my mom is ... she's always there for me, even when I get in trouble.

You see, it hasn't always been this way.

In the midst of my highly distracted life, I started a new practice that was quite different from the way I behaved up until that point. I became a yeller. It wasn't often, but it was extreme -- like an overloaded balloon that suddenly pops and makes everyone in earshot startle with fear.

So what was it about my then 3-year-old and 6-year-old children that caused me to lose it? Was it how she insisted on running off to get three more beaded necklaces and her favorite pink sunglasses when we were already late? Was it that she tried to pour her own cereal and dumped the entire box on the kitchen counter? Was it that she dropped and shattered my special glass angel on the hardwood floor after being told not to touch it? Was it that she fought sleep like a prizefighter when I needed peace and quiet the most? Was it that the two of them fought over ridiculous things like who would be first out of the car or who got the biggest dip of ice cream?

Yes, it was those things -- normal mishaps and typical kid issues and attitudes that irritated me to the point of losing control.

That is not an easy sentence to write. Nor is this an easy time in my life to relive because truth be told, I hated myself in those moments. What had become of me that I needed to scream at two precious little people who I loved more than life?

Let me tell you what had become of me.

Excessive phone use, commitment overload, multiple page to-do lists and the pursuit of perfection consumed me. And yelling at the people I loved was a direct result of the loss of control I was feeling in my life.

Inevitably, I had to fall apart somewhere. So I fell apart behind closed doors in the company of the people who meant the most to me.

Until one fateful day.

My older daughter had gotten out a stool and was reaching for something in the pantry when she accidentally dumped an entire bag of rice on the floor. As a million tiny grains pelleted the floor like rain, my child's eyes welled up with tears. And that's when I saw it -- the fear in her eyes as she braced herself for her mother's tirade.

She's scared of me, I thought with the most painful realization imaginable. My 6-year-old child is scared of my reaction to her innocent mistake.

With deep sorrow, I realized that was not the mother I wanted my children to grow up with, nor was it how I wanted to live the rest of my life. 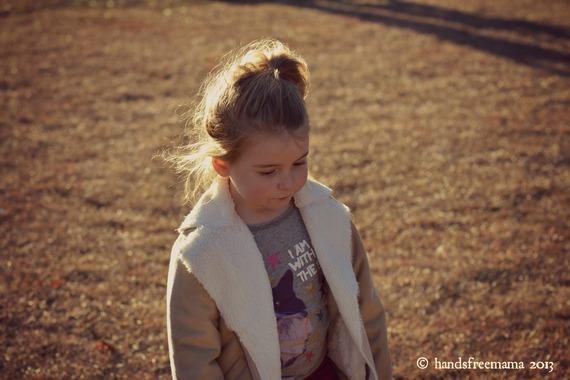 Within a few weeks of that episode, I had my Breakdown Breakthrough -- my moment of painful awareness that propelled me on a Hands Free journey to let go of distraction and grasp what really mattered. That was three years ago -- three years of scaling back slowly on the excess and electronic distraction in my life ... three years of releasing myself from the unachievable standard of perfection and societal pressure to "do it all." As I let go of my internal and external distractions, the anger and stress pent up inside me slowly dissipated. With a lightened load, I was able to react to my children's mistakes and wrongdoings in a more calm, compassionate and reasonable manner.

I said things like, "It's just chocolate syrup. You can wipe it up, and the counter will be as good as new."

(Instead of expelling an exasperated sigh and an eye roll for good measure.)

I offered to hold the broom while she swept up a sea of Cheerios that covered the floor.

(Instead of standing over her with a look of disapproval and utter annoyance.)

I helped her think through where she might have set down her glasses.

(Instead of shaming her for being so irresponsible.)

And in the moments when sheer exhaustion and incessant whining were about to get the best of me, I walked into the bathroom, shut the door and gave myself a moment to exhale and remind myself they are children, and children make mistakes. Just like me.

And over time, the fear that once flared in my children's eyes when they were in trouble disappeared. And thank goodness, I became a haven in their times of trouble -- instead of the enemy from which to run and hide.

I am not sure I would have thought to write about this profound transformation had it not been for the incident that happened while I was finishing up the manuscript for my book. In that moment, I got a taste of life overwhelmed and the urge to yell was on the tip of my tongue. I was nearing the final chapters of my book and my computer froze up. Suddenly the edits of three entire chapters disappeared in front of my eyes. I spent several minutes frantically trying to revert to the most recent version of the manuscript. When that failed to work, I consulted the Time Machine backup, only to find that it, too, had experienced an error. When I realized I would never recover the work I did on those three chapters, I wanted to cry -- but even more so, I wanted to rage.

But I couldn't because it was time to pick up the children from school and take them to swim team practice. With great restraint, I calmly shut my laptop and reminded myself there could be much, much worse problems than rewriting these chapters. Then I told myself there was absolutely nothing I could do about this problem right now.

When my children got in the car, they immediately knew something was wrong. "What's wrong, Mama?" they asked in unison after taking one glimpse of my ashen face.

I felt like yelling, "I just lost a fourth of my book!"

I felt like hitting the steering wheel with my fist because sitting in the car was the last place I wanted to be in that moment. I wanted to go home and fix my book -- not shuttle kids to swim team, wring out wet bathing suits, comb through tangled hair, make dinner, scrape dirty dishes and do the nightly tuck in.

But instead I calmly said, "I'm having a little trouble talking right now. I lost part of my book. And I don't want to talk because I feel very frustrated."

"We're sorry," the older one said for the both of them. And then, as if they knew I needed space, they were quiet all the way to the pool. The children and I went about our day and although I was more quiet than usual, I didn't yell and I tried my best to refrain from thinking about the book issue.

Finally, the day was almost done. I had tucked my younger child in bed and was laying beside my older daughter for nightly "Talk Time."

"Do you think you will get your chapters back?" my daughter asked quietly.

And that's when I started to cry -- not so much about the three chapters, I knew they could be rewritten -- my heartbreak was more of a release due to the exhaustion and frustration involved in writing and editing a book. I had been so close to the end. To have it suddenly ripped away was incredibly disappointing.

To my surprise, my child reached out and stroked my hair softly. She said reassuring words like, "Computers can be so frustrating," and "I could take a look at the Time Machine to see if I can fix the backup." And then finally, "Mama, you can do this. You're the best writer I know," and "I'll help you however I can."

In my time of "trouble," there she was, a patient and compassionate encourager who wouldn't think of kicking me when I was already down.

My child would not have learned this empathetic response if I had remained a yeller. Because yelling shuts down the communication; it severs the bond; it causes people to separate -- instead of come closer.

The important thing is ... my mom is always there for me, even when I get in trouble. 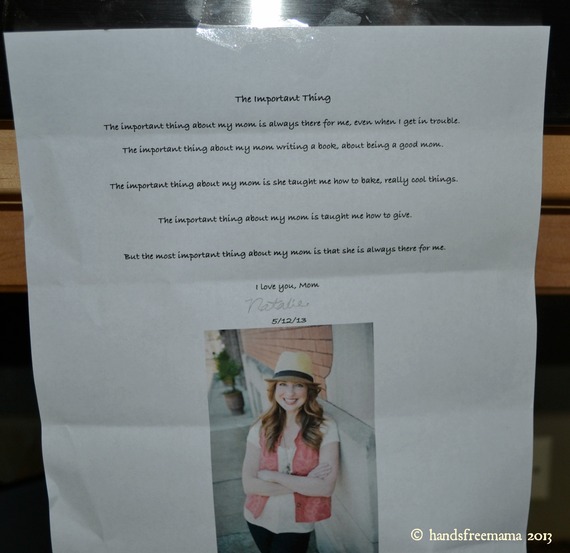 My child wrote that about me, the woman who went through a difficult period that she's not proud of, but she learned from. And in my daughter's words, I see hope for others.

The important thing is ... it's not too late to stop yelling.

The important thing is ... children forgive -- especially if they see the person they love trying to change.

The important thing is ... life is too short to get upset over spilled cereal and misplaced shoes.

The important thing is ... no matter what happened yesterday, today is a new day.

Today we can choose a peaceful response.

And in doing so, we can teach our children that peace builds bridges -- bridges that can carry us over in times of trouble.