What do you do if you assiduously followed the guidelines and applied to be a presenter at a visual arts conference, only to be told that, although the committee approved your proposal, they failed to formally inform you of a substantial registration fee? Well, if you are performance artist Jodie Lyn-Kee-Chow, you crash the show! Lyn-Kee-Chow showed up last October at the 2nd International Rex Nettleford Arts Conference, held at The Edna Manley College of the Visual and Performing Arts in Kingston, Jamaica armed with "butterdollars" that she surreptitiously scattered on the grass and inconspicuous areas of the school grounds. Before long students at the school were on Instagram discussing the artistic intervention. For Lyn-Kee-Chow, crashing the conference was an adventurous thing to do. "I got quite a high from doing this action," she admitted to me. "I enjoyed breaking the rules."

Butterdollars. What are those, you ask? Butterdollars are 240 origami butterflies that Lyn-Kee-Chow made out of money: there is a U.S. $1 bill on one side of the butterfly and on the other side, a photocopy of the Jamaican $100 bill. Given that both bills are green, the artist reasoned that they would easily blend into the grass and greenery around the conference area. The artist chose those precise denominations of money because "this $100 Jamaican to $1 United States exchange is the approximate value of the current foreign exchange rate between both nations. The piece is titled "Butterdollarflies: 100 to 1" and is meant to comment on the political (monetary) reasons for my not performing at the conference. But there are other meanings to the work, as well. The butterdollars are meant to represent the hybrid state of the Jamaican economy, as well as the current state of environmental sustainability that is in flux due to commercial development and the natural landscape of the island that is declining."

One cannot see Jodie's work, in fact, and not think of the endangered Jamaican Giant Swallowtail butterfly and several other endangered species on the island. And one is forced to think, too, of recent developments on the island, which would see part of the Portland Bight Protected Area, two small plots of land called Goat Islands -- both protected areas under the Natural Resources Conservation Authority Act, the Fishing Industry Act and the Wildlife Protection Act -- become the first Chinese-owned transshipment port and logistics hub in the region. "My family talked a lot about this development when I was in Jamaica for the conference," the Queens-based artist said. "They were particularly concerned about how polluted everything would become. It is all so sad."

In fact, the theme of protecting what is endangered has long been invoked in Ms. Lyn-Kee-Chow's work. In her "Knots Landing" series, the artist uses images of birds in peril, such as the Spoon-billed Sandpiper, the Scrub Jay and the Red Knot -- migratory shorebirds on the brink of dying out due to global climate change and industrial fishing of their food source -- to make a comment about human consumption habits. Says the artist: "These works consist of paper cutouts of birds whose images are carefully selected and scaled to their actual size. The cutouts are then laminated and strung with fish line and arranged in formations, such as a flock of birds in space, symbolic of their natural placement in the sky. Their one-sidedness and repetition is on the one hand a positive reminder of their presence, while the blank side is a representation of their absence in our natural world. I am hoping that by addressing these issues in this body of work I can raise awareness of their predicament."

Born on the island of Jamaica, the artist is careful to bring a critical mind to her art projects. She is also mindful of the need to combine "performance with social practice," and guards against sentimentality in her work. Says the artist: "As an immigrant, I experience memory as a dangerous nostalgia. But, living away from Jamaica, it is easy to see a co-modified imagery of Caribbean primitivism. In my work I hope to disrupt this idea by advancing nature as not simply consumed but consuming." Consequently, in her performances, the natural landscape is often invoked as a stage to address such issues as "the accumulation of goods, luxurious lifestyles, socio-economic changes, and cultural development."

Take her "Crop Killa" performance, for example. In this work, Lyn-Kee-Chow informs of how Jamaica moved from being a self-sufficient agriculture-producing country to one that imports basic agricultural goods that can easily be grown on the island. "In this performance the main character starts out as a wholesome farm girl carrying bananas on her head. But hidden underneath the bananas in her basket are several guns. In time, the character moves from being a wholesome farm girl to a rambunctious, almost violent persona." This performance is of course a stand-in for what has happened to Jamaican society since the late 1960s and early 1970s. It bewails the current levels of violence in the country.

But as critical as Lyn-Kee-Chow is of Jamaica, she cannot help but be moved by the island's sheer physical beauty. "It seems as if," she said to me, "in one way or another I am always returning to my roots in Jamaica. The island just has a raw natural beauty that I am always returning to." We see this most clearly in her "Mildendranthema Grandeflorum" piece, which is based on the artist's experience of her grandmother's garden. "My grandmother is a prize-winning horticulturalist and a florist. She is, in fact, my grandmother, in love with her garden. She spends hours and hours tending to her garden, and there are all these birds around! I decided to create a fairy tale around my grandmother's love of her garden. In this piece I created a gigantic flower, which is really a hybrid of the sunflower, the rose, and of course the hibiscus, which is everywhere all over the island. This 12-foot-tall hybrid grows only every 1,000 years. I wanted to identify this work as being a Jamaican flower, so I put the words 'pon de river' in my performance so people could locate where this flower was from." After creating this work Ms. Lyn-Kee-Chow then went in search of Jamaicans, in Canada and the United States, where they tend to congregate, and in these places she went in search of the gardens that they created. "In effect, I had the main character in this piece go on a journey to visit fellow Jamaicans in all these various places."

Migrating shore birds, hybrid flowers, transience and ephemerality, the in-between places that are not fixed -- indeed, mobile -- are at the center of the work of this interdisciplinary artist. More than anything else, the artist insists she wants her work to "engage the viewer to question societal and cultural norms, and most importantly, the state of our natural world." And so your work does, Ms. Lyn-Kee-Chow. And so it does. 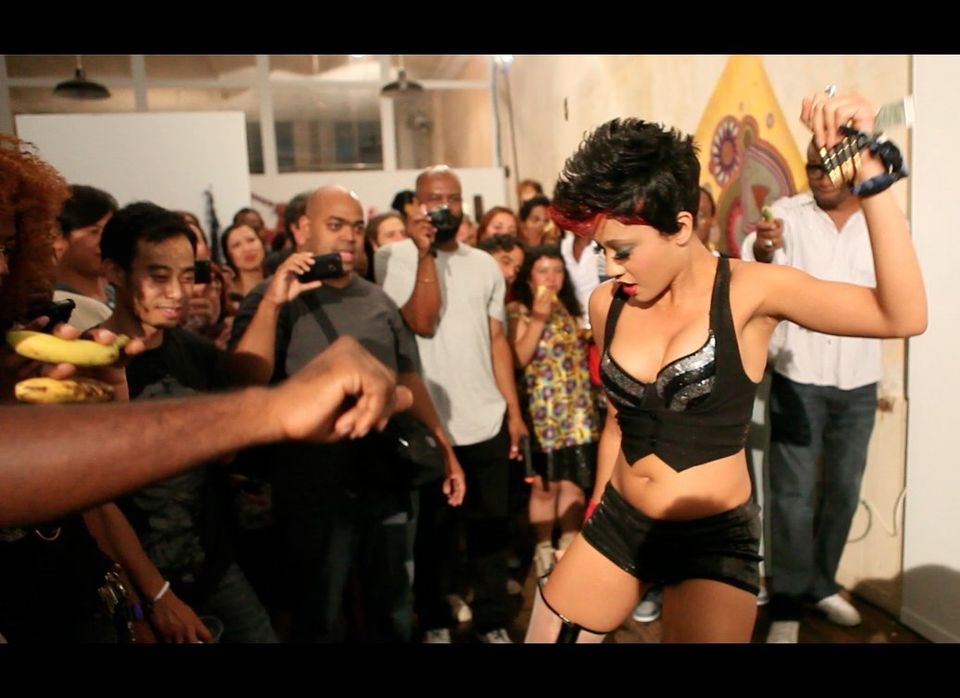