What is the debate concerning international child adoption? That depends on who you ask. 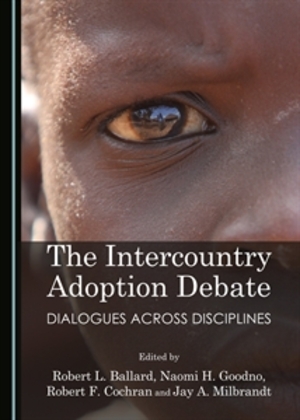 The formidable 737-page, hard cover volume contains twenty-seven essays in seven sections, which are primarily the result of the 2010 Intercountry Adoption Summit in Canada and the 2013 Pepperdine conference. The editors bring together scholars from all corners of the world where adopted children originate as well as where they are distributed to, to address this complex and controversial topic, providing an in-depth discussion of International Child Adoption (ICA).

The Decline and the Debate

The decline in ICA is addressed by many contributors. David Smolin, one of the contributors, wrote about the decline and its effect on the ICA debate on Facebook in July, 2015, shortly after the closing of the Joint Council for International Children's Services (JCICS or Joint Council) after 40 years of operation. Smolin wrote that:

"[D]espite what some may believe, the intercountry adoption debate is over... because, at least for now, very few on any side of the debate actually believe that the numbers will rise substantially anytime in the foreseeable future. Instead, the infrastructure of agencies and organizations built around large-scale ICA are being dismantled. In the United States, perhaps as many as four hundred international adoption agencies have closed."

Yet the debate continues in this book. Benyam D. Mezmur sees it as a polarization of two views:

"On the one hand, intercountry adoption is presented as a heart-warming act of goodwill that benefits both a child and adoptive family. On the other hand, critics deplore the practice as 'modern-day imperialism,' allowing dominant, developed cultures to strip away a developing country's most precious resources, its children'" (pp. 651-2).

Rotabi, et al., see a triad of positions which they define as: Promoters, 2. Pragmatist, 3. Abolitionists (p. 49).

Promoters or pro-adoptionists, are represented by contributors such as Elizabeth Bartholet and Tom Difilipo, who have long championed more international adoption to "save" more "unparented children" and the right of every child to a "permanent family" (presumably a family other than that consisting of the parents every child is born to.)

Predictably Bartholet calls the decline in ICA a "child human rights tragedy" because she says: "We know" that "international adoption works really well for children" ignoring all adult international adoptees, such as Jane Jeong Trenka and the contributors to the book Adoptionland, who think otherwise, and those, like Mezmur, who see ICA as imperialism, colonialism, and even relate it to slavery.

Pragmatists, or middle-of-road, centrists, comprise the largest percentage of contributors. David Smolin, Karen Smith Rotabi, Adam Petman and others, believe the problems inherent in ICA can be curbed, yet at the same time they accept as unchangeable that "no matter how strong a country's child welfare system, there will always be some group of children who will not be able to find permanent homes in their country" (Naomi Harlin Goodno, p. 237) despite Rotabi, et al., calling ICA "highly unregulated and multimillion-dollar industry," (p. 76) words that ring all too familiar to this author of The Stork Market: America's Multi-Billion Dollar Unregulated Adoption Industry (2008).

Abolitionists, those who oppose market-driven ICA in favor of family preservation, are scarce in this volume. Triseliotis' call to remove financial incentives in adoption was mentioned, and Kit Myers suggested that: "Attempting to erase adoptees' birth cultural identity" is "state sanctioned violence" (p. 579).

Perhaps the most critical essay in the book comes from Fronek, et al., who point out that:

"Other considerations such as the moral...circumstances...that lead to intercountry adoption and the disempowerment of first parents, families and communities tend to be ignored..." (p. 348)

"...the disempowered first parents, families, and communities ....The adverse impact on parents and families who lose their children to adoption and adoptees has only relatively recently been recognized by researchers....yet in reality its practice characteristically pits the rights of the poor against those of the privileged. That is, it pits women affected by their social and economic conditions against relatively affluent women hoping to parent a child" (p. 351).

"While much.is debated about child trafficking in intercountry adoption, little attention is paid to the more obvious phenomenon of trafficking in birth mothers....A careful analysis of the components of human trafficking under the Palermo Protocol suggests that birth mothers who are recruited, transported or harbored - by means of force, fraud, or coercion - to be exploited for their labor and maternal rights can be viewed as victims of trafficking in context of intercountry adoption. Appropriate policies and programs must be established and enforced in both countries of origin and receiving countries to protect birth parents from being exploited and trafficked" (p. 327).

Dismissing birth parents is not an accident. Fonesca and San Roman note that:

"[R]esearch suggests that in the great majority of cases, adoptive parents are motivated less by humanitarian motives than by the desire to allow childless people to experience parenthood........the need to go overseas in order to find an adoptable child depends to a large extent, on the supply of local adoptable children...and also because the child's distant origin serves to decrease worries about the return of a birth mother who would compete for her child's affection" (p171).

Despite this recognition of the marginalization of birth mothers, this volume perpetuates that silence. The book jacket proclaims that the multi-faceted writers of this collection include "parents, policymakers, adoptees, and adoption agency representatives." I noted two contributors who identified as being adopted, or whom I know to be; four who identified as adoptive parents, or whom I know to be. While perhaps I missed it, or they did not identify themselves, I did not see any original mothers represented. There is one birth father, Mark Riley, who is also an adoptive parent, leaving the voice of birth mothers absent.

"The very best way to guarantee a family for vulnerable children is to ensure they do not lose their family in the first place. So whenever it is reasonably possible to reunite or keep together a struggling family in a way that ensures a safe, nurturing environment for children, this objective should be prioritized over any other potential solution" (p.441).

Medefind also says that: "A child should never be given or accepted for adoption if lack of financial resources is the only reason for relinquishment." He bemoans that birth parents have "been overlooked or even disparaged" which he says is unacceptable for Christians. (p. 435).

Admirable words, but one wonders how they are enacted in practice by CAO, however, given their website states that the organization serves to "inspire and equip Christians to live out effectively the Bible's call to care for orphans and vulnerable children" and mentions no family preservation work or goals, nor any concerns about birth families or poverty. The CAFO mission is to "grow effective adoption, foster care and global orphan care rooted in the local church."

Writing about "misguided kindness" following natural disaster in Haiti, Rotabi et al, quote international Social Services (ISS) which calls for never removing children and placing them for adoption during periods of disaster (P. 631). The concern, however, is that "such child removals put at risk the long-term potential of adoption programs from affected countries." And the "long-term impact may be the cessation of adoptions for many other OVC (orphaned and vulnerable children) in years to follow" without any mention of the permanent injustice for the children grabbed up too quickly and possibly mistakenly, and their family members deprived of their children (p. 649).

In the introduction, Ballard sums up the current state of ICA, stating:

"...dialogues about intercountry adoption have shifted to questioning the merits of adoption itself rather than a solution-oriented focus of improving policies, procedures and processes. Advocates of ICA now find themselves defending the relative 'good' of placing a child with a family in another country. With the pendulum shifting away from ICA as an unquestioned good to one where critics have raised difficult and unavoidable questions..." (p. 2).

"Promoted as the only viable course of action, the removal of children further impoverishes the individuals and communities who lose their children. ...The desire to form families and the reality of separated families are two different problems affecting different stakeholders in different circumstances. ...adoption sits on a continuum of a range of possibilities and interventions and should not assume a priority position on this continuum....alternative action that ensures the equal participation and inclusion of parents, families and communities, and adult and child adoptees to ensure their place at the table is needed. Such an approach necessitates a shift in the balance of power and influence...dialogue begins with prevention [and] developing meaningful support in regions where adoption is rife..." (pp. 351-365).

The consensus from all sides, however, sadly seems to be defeatism. As long as there is demand, there will be ICA to meet the demand. Smolin says:

"...it appears likely that revelations of abusive adoption practices will continue given recent reports, for example, from China, The Democratic Republic of the Congo, Ethiopia, and Uganda. As in the past, it is unlikely that remedies will be provided even in cases that become notorious, and yet this continuing pattern will serve as a kind of warning to many nations that will help inhibit the further spread of such abusive practices while also suppressing participation in ICA due to fears that opening to ICA means opening to child trafficking" (p.275)

While the debate will likely continue as long as children are exported and imported, this is an important book for all interested in adoption and child welfare.