Flashback to the films Interstellar and Gravity. Now hold that thought. This latest voyage into outer space places itself firmly between the two. It's not as sterile as the former and not nearly as OMG entrancing as the latter. The entertainment value is steady, but once the premise is set, the storyline becomes predictable. 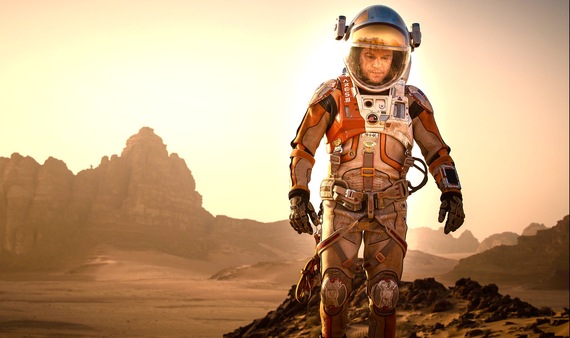 The screenplay by Drew Goddard, the ingenious writer of World War Z, is based on an original novel by computer programmer-turned-writer Andy Weir. Goddard's hard task was to take a book filled with figures, science and math equations and bring it to life. What he has created is a screenplay full of vigor, somewhat conventional, oddly humorous, sometimes emotional and intermittently engaging. Director Ridley Scott adds directorial guidance and slick, professional production elements (think Prometheus). His glossy, overbearing style is balanced by the animated cast, which humanizes the characters.

On Mars, a space crew is carrying out their duties. A windstorm arrives. It becomes more and more intense and violent. They try to make it back to their landing vessel. Flying debris knocks astronaut Mark Watney (Matt Damon) out of sight into a cloud of dust. It's a tough choice, but Commander Melissa Lewis (Jessica Chastain) decides to hurry her subordinates back onboard, thinking Watney could not have survived the hit. Lewis and her crewmates (Michael Pena, Kate Mara, Aksel Hennie, Sebastian Stan) head back to earth, which is a yearlong journey.

Back on earth, the head of NASA (Jeff Daniels) holds a press conference, announcing Watney's death. Little does anyone know that Watney survived. As a trained botanist and mechanical engineer, he figures out how to stretch rations, make water and grow potatoes. Everyone is shocked when a satellite's camera picks up images of Mars, and they notice objects have been moved around. NASA and its California-based Jet Propulsion Laboratory form a think tank with the brightest minds (Chiwetel Ejiofor, Donald Glover) in an effort to communicate with the astronaut and devise a plan to bring him back to earth.

Damon's warm sense of humor makes the stranded insular Watney affable. Hard not to like his plucky nature. Daniels as the head of NASA is most concerned with branding and his organization's image in the media. Ejiofor's earnest performance is a great contrast to Daniels', as he plays NASA's Director of Mars missions; a man more interested in the astronaut's wellbeing. Donald Glover portrays an "orbital dynamicist" at JPL, and is suitably animated as a geek seeking solutions. Chastain, Pena and Mara are all fine within their limited amount of screen time. Saturday Night Live alumna Kristen Wiig, as an oddball media executive, gives an out-of-place performance, like she's fleshing out a quirky character in an SNL skit in the middle of a dramatic movie.

The music by Harry Gregson-Williams (Shrek), cinematography by Dariusz Wolski (Prometheus), costumes by Janty Yatesav (Gladiator) and production design by Arthur Max (Prometheus) are near perfect at setting atmosphere. This is Ridley Scott's strong suit as a producer; he always assembles a high-end, unflappable tech crew. But in some cases his grandiose production elements overwhelm the storyline and characters (Body of Lies, American Gangster).

If you see trailers for The Martian, and start to have a déjà vu experience, you are not alone. Matt Damon had an unbilled role in the film Interstellar where he also played a stranded astronaut. Only in that film he wasn't such a nice guy. Why he decided to play the same kind of character in less than a year is a mystery only he and his agent can answer.

As 141 minutes roll by, the visuals (especially of Mars's rusty orange/brown landscape), and performances (Damon and Ejiofor have the juiciest roles), help to pique interest and entertain. Yet this film feels like a retread and when you walk out of the theater you may not feel satiated. Something about this whole project feels like it should have been an extended TV series like Lost. It just doesn't have the gravitas, originality or layers of undercurrent with far-reaching themes that made Gravity and 2001: A Space Odyssey better movies.

A half-hour into The Wizard of Oz, you can predict that Dorothy will make it back to Kansas. A half-hour into The Martian any seasoned moviegoer can figure out where the plotline in this feel-good movie has to go. That's a shame and the film's biggest transgression.