Rick Rieder shares a chart showing why to get used to living in a low-growth world. 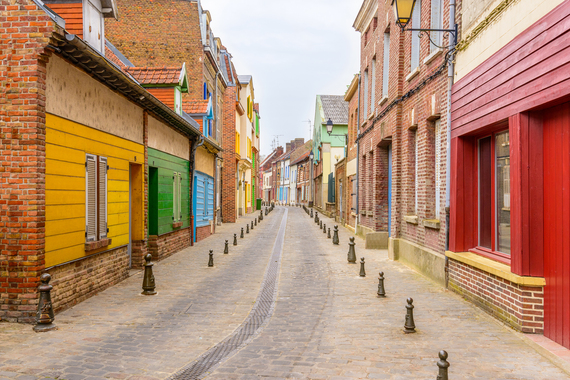 Global growth appeared to sputter earlier this year, roiling markets. However, investors should get used to living in a moderate growth world. I see low global growth persisting for a while, with economic growth overall settling into a narrower corridor in the years ahead. This is evident in the chart below. 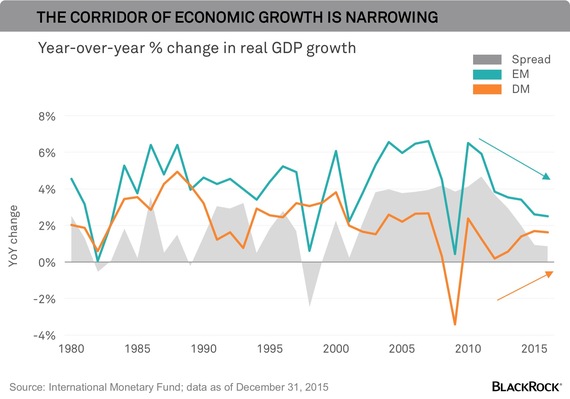 Global growth over the past decade has been driven primarily by investment-fueled growth in China and other emerging markets (EMs). In contrast, comparative growth in developed markets (DMs) has been relatively stagnant. When looking at investment as a percentage of gross domestic product (GDP) since 2000, it has largely been the EM economies that have led the way, with DM investment declining, according to our analysis.

But now we are witnessing a contraction in EM investment growth, as investment and trade are slowing on the back of a decade-long boom. This is resulting in slowing EM real GDP growth rates, as the chart above shows.

This EM slowdown will have a larger impact

Since the EM share of the total global GDP is approaching 40 percent, the broad-based slowdown in EM growth is likely to reverberate more strongly around the world than it would have in decades past. And with very low DM growth rates forming the lower bound of the new growth corridor, the candidates to take up the share of global growth that EMs are relinquishing are few and far between.

Growth is likely to be stuck in this narrower corridor in the years ahead for other reasons too, including changing demographic trends across much of the globe and the natural evolution of maturing economies. These big-picture trends are difficult to change and likely to be with us for a long time. In addition, technological innovations are disrupting every industry, creating strong deflationary pressures that are further dampening growth.

Of course, there will be periods of relatively good growth within the narrower growth corridor. Case in point: Second-quarter U.S. GDP growth is likely to come in at a pretty good level after a weak first quarter, driven by a strong U.S. consumer. But the long-term story will be low growth.

So what does this mean for investors? These dynamics help explain why we're living in a world of lower yields and harder to come by cash flows.

Rick Rieder, Managing Director, is BlackRock's Chief Investment Officer of Global Fixed Income and is a regular contributor to The BlackRock Blog.