Approximately a decade ago I wrote a paper with a similar title, announcing that forces were aligned to produce the perfect fiscal storm. What I was talking about was a budget crisis at the state and local government levels. I had recognized that the economy of the time was in a bubble, driven by what I perceived to be unsustainable deficit spending by the private sector -- which had been spending more than its income since 1996. As we now know, I called it too soon -- the private sector continued to spend more than its income until 2006. The economy then crashed -- a casualty of the excesses. What I had not understood a decade ago was just how depraved Wall Street had become. It kept the debt bubble going through all sorts of lender fraud; we are now living with the aftermath.

Still, it is worthwhile to return to the "Goldilocks" period to see why economists and policymakers still get it wrong. As I noted in that earlier paper:

It is ironic that on June 29, 1999 the Wall Street Journal ran two long articles, one boasting that government surpluses would wipe out the national debt and add to national saving--and the other scratching its head wondering why private saving had gone negative. The caption to a graph showing personal saving and government deficits/surpluses proclaimed "As the government saves, people spend". Almost no one at the time (or since!) recognized the necessary relation between these two that is implied by aggregate balance sheets. Since the economic slowdown that began at the end of 2000, the government balance sheet has reversed toward a deficit that reached 3.5% of GDP last quarter, while the private sector's financial balance improved to a deficit of 1% of GDP. So long as the balance of payments deficit remains in the four-to-five percent of GDP range, a private sector surplus cannot be achieved until the federal budget's deficit rises beyond 5% of GDP (as we'll see in a moment, state and local government will continue to run aggregate surpluses, increasing the size of the necessary federal deficit). [I]n recession the private sector normally runs a surplus of at least 3% of GDP; given our trade deficit, this implies the federal budget deficit will rise to 7% or more if a deep recession is in store. At that point, the Wall Street Journal will no doubt chastise: "As the people save, the government spends", calling for a tighter fiscal stance to increase national saving!

Turning to the international sphere, it should be noted that US Goldilocks growth was not unique in its character. [P]ublic sector balances in most of the OECD nations tightened considerably in the past decade--at least in part due to attempts to tighten budgets in line with the Washington Consensus (and for Euroland, in line with the dictates of Maastricht criteria). (Japan, of course, stands out as the glaring exception--it ran large budget surpluses at the end of the 1980s before collapsing into a prolonged recession that wiped out government revenue and resulted in a government deficit of nearly 9% of GDP.) Tighter public balances implied deterioration of private sector balances. Except for the case of nations that could run trade surpluses, the tighter fiscal stances around the world necessarily implied more fragile private sector balances. Indeed, Canada, the UK and Australia all achieved private sector deficits at some point near the beginning of the new millennium.(Source: L. Randall Wray, "The Perfect Fiscal Storm" 2002)

As we now know, my short-term projections were not too bad, but the medium-term projections were off. The Bush deficit did grow to 5% of GDP, helping the economy to recover. But then the private sector moved right back to huge deficits as lender fraud fueled a real estate boom as well as a consumption boom (financed by home equity loans). See the following chart (thanks to Scott Fullwiler): 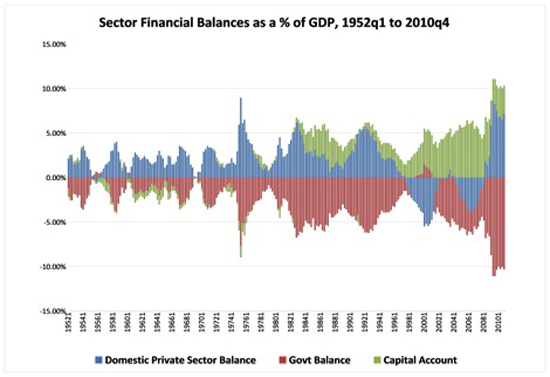 This chart shows the "mirror image": a government deficit from 1980 through to the Goldilocks years is the mirror image of the domestic private sector's surplus plus our current account deficit (shown as a positive number because it reflects a positive capital account balance). During the Clinton years as the government budget moved to surplus, it was the private sector's deficit that was the mirror image to the budget surplus plus the current account deficit. This mirror image is what the Wall Street Journal had failed to recognize -- and what almost no one except MMT-ers and the Levy Economic Institute's researchers understand. After the financial collapse, the domestic private sector moved sharply to a large surplus (which is what it normally does in recession), the current account deficit fell (as consumers bought fewer imports), and the budget deficit grew mostly because tax revenue collapsed as domestic sales and employment fell.

Unfortunately, just as policymakers learned the wrong lessons from the Clinton administration budget surpluses -- thinking that the federal budget surpluses were great while they actually were just the flip side to the private sector's deficit spending -- they are now learning the wrong lessons from this crash. They've managed to convince themselves that it is all caused by government sector profligacy. Especially, spending on public sector workers.

For example, Wisconsin Governor Walker's attack on workers has been taken on the pretext that state employee wages and pensions have driven the budget into deficit. We all know that is ridiculous. The reality is simple: Wall Street crashed the economy, crashed state revenues, and crashed workers' pensions. Washington responded with a massive bail-out for Wall Street -- perhaps $25 trillion worth. It gave a mere pittance to "Main Street" in its $1 trillion stimulus package. Since the recession manufactured on Wall Street cost the economy a lot more than that, Main Street is not on the road to recovery. No one is projecting that jobs will return for many more years. It is delusional to believe that economic recovery can really get underway until we have added 8 million jobs.

In other words, the fiscal storm that killed state budgets is the same fiscal storm that created federal budget deficits. You cannot lose about 8% of GDP (due to spending cuts by households, firms and governments) and over 8 million jobs without negatively impacting government budgets. Tax revenue has collapsed at an historic pace. State governments really do need to balance their budgets, and they really do need tax revenue to finance their spending or to service debt. The federal government, as the sovereign issuer of the currency is in a different situation. I will not go through the MMT approach to sovereign currency spending as all readers here are familiar with that. My point is that states really are facing a funding crisis. The federal government does not face a solvency constraint and it can always afford to buy anything for sale in dollars. Still, as we all know, Washington Beltway insiders have manufactured a fake budget crisis to serve political ends.

State spending cuts (or tax increases) will not restore their budgets. Just take a look at the results of austerity in Greece or the UK. Budget-cutting in a downturn does not reduce deficits significantly. The reason is obvious: austerity slows the economy and reduces tax revenue. Art Laffer's supply siders were onto something, although they mostly got it the wrong way around. Yes, a booming economy will generate a movement toward balanced government budgets. They thought that tax cuts are always the answer to everything -- cut tax rates and you get more tax revenue. I would not say that that never works, but it didn't when Presidents Reagan and Bush tried it. However, if we get the Laffer Curve the right way around, we can use it to explain why austerity in a downturn just makes budget deficits worse.

In truth, state budgets will not recover before the economy recovers. And state austerity will just make the economy worse. So, as a Thatcher might say: TINA: there is no alternative -- to federal government stimulus, that is. I realize that goes against the deficit hysteria in Washington. But it is the truth.

What kind of stimulus makes the most sense? I think we need another trillion dollars, minimum. This can be split equally between aid to the states and extension of the payroll tax holiday. The federal government should provide $500 billion in block grants to the states, on a per capita basis. On the condition that they stop attacking state workers. The funds would be used to replace lost tax revenue -- to cover operating expenses (and where possible, to actually increase spending on priority projects). This program would continue until economic growth and job creation reaches established thresholds. Let us say 10 million more jobs or a measured unemployment rate of 4%.

The payroll tax holiday would also be expanded, with a moratorium on taxes for both workers and employers until those thresholds are reached. Why penalize job creation with an employment-killing payroll tax? Reward firms for providing jobs by giving them tax relief. Let workers keep more of their hard-earned pay. This is the quickest and best way to give significant tax relief to most Americans. In addition, we need to stop the attacks on unemployment compensation. To be sure, jobs should always be favored over unemployment compensation -- but until we get the jobs we must extend the unemployment benefits. Cutting benefits will just prevent the jobs from coming back.

These measures are only a first step. We still have a lot of damage to repair -- damage caused by Wall Street's excesses. And we will need to rein-in and prosecute the fraudsters, otherwise they will blow up the economy again. Actually, they are already trying to do that -- creating yet another commodities market speculative bubble. It is looking an awful lot like 2006 all over again. However this time, we are down by 8 million jobs and trillions of dollars of household wealth. Wall Street is bubbling up even as the economy as a whole is in the trenches. This bubble will not last long. It is going to crash. That will expose the huge accounting holes in the bank balance sheets. Wall Street will want another 25 trillion dollar bail out. This time, we've got to follow Nancy's dictum: just say no.

Professor of Economics and Research Director of the Center for Full Employment and Price Stability, University of Missouri–Kansas City