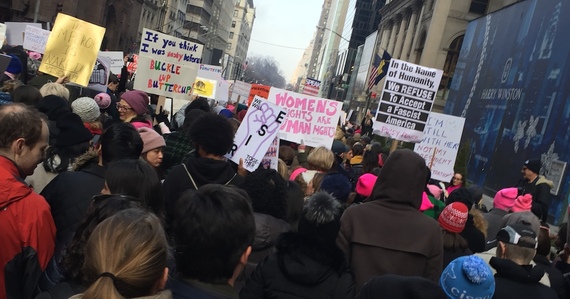 History was made Saturday, January 21st, 2017 when more than three million people came together to march in Washington DC, cities across the United States, and in countries all around the world. Young, old, black, white, Christians, Muslims--people from all races and religions gathered together to protest. Although the march addressed many specific issues facing women, the overall theme was "Women's Rights are Human Rights and Human Rights are Women's Rights."

The feeling of unity, purpose, and love in the air was palpable even to a bystander just watching on TV. A few of the more positive signs that I particularly liked were "Love Trumps Hate", "If Mom's Not Happy, Nobody's Happy". "Girls just want to have FUNdamental rights" " No Longer I Am Accepting the Things I Cannot Change, I Am Changing the Things I Cannot Accept".

The Goddess is in Connections

A bigger phenomenon than women just marching on the streets occurred on January 21. It was the beginning of a revolution united by the single purpose to restore basic human values of goodness. As Michelle Obama said at the Democratic Convention, "When they go low, we go high". Almost 3 million women marching together rose very high, touching all the corners of the world.

Gloria Steinem captured the feeling of the day when she said, "God maybe is in the details, but the Goddess is in connections!" Women are connectors because they engage each other from heart to heart. Mothers never want to see their children go to war. Women don't want to fight and conquer; instead they would rather hug and talk, and solve problems through communication and discussing each others' ideas.

Change is in the Air

History has shown that women coming together are powerful agents of change. During the second Liberian civil war, it was the women who went to Ghana and sat outside the government buildings until the warring factions came to a peace agreement. It was the women in Iceland who went on strike for a day in 1975 and gained equal rights. Suffragettes coming together in England and the USA won the right for women to vote.

Women protesting around a united purpose have proven to be an effective means for change during times of great need. However, there is an even more powerful level that can bring profound change. 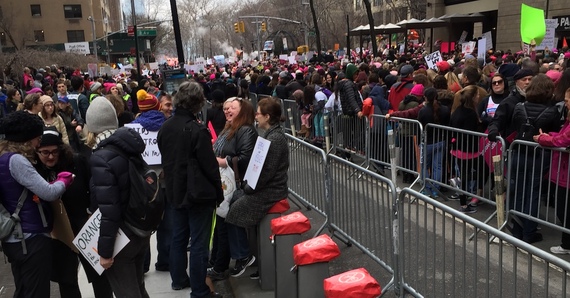 Change on the Basis of Non-changing Silence?

No two people on this planet are the same. We all have different thoughts and feelings based on our background, culture, needs and desires. However, deep inside everyone on this planet is a place that is the same, the state of pure silence within. The unique quality of this silence is that my silence is the same as your silence. Silence is silence no matter who you are, no matter what the color of your skin, or where you live on this earth.

This silence, the source of thought, can be systematically experienced through the practice of Transcendental Meditation (TM). Scientific research shows that during TM, even from the first meditation, the brain produces coherence in high-power alpha waves. This distinct brain pattern corresponds to the state of silence, or inner wakefulness. This coherence spreads throughout the brain and is strongest in the prefrontal cortex -- the seat of your brain's executive judgment.

A coherent brain operates from a state of unity. All the various specific neurons are united in this holistic experience of total brain functioning, the restful alertness present in the state of transcendental consciousness This is a place where everyone can be united on the deepest level of life. When we are coherent and harmonious within, that coherence and unity will naturally spill out into the environment, creating more order and unity in our surroundings.

As women, we are the creators of life and as mothers the main nourisher of our families. Naturally inherent in us is also the tendency to be nourishers and uniters of our world family. If women can also meditate together and contact the field of pure consciousness, the unified field of infinite peace, this nourishing, uniting power will be amplified many times in the environment. From this level of nature's functioning we can radiate a powerful influence of harmony in our family, society, and nation.

While it is important to take immediate and strong actions on the outside to combat the present onslaught of racism, homophobia, and injustice, and continue to fight for equal rights and other issues facing women today, all these actions will be much more powerful if we can support them by accessing the deepest level within everyone. Einstein said that "Problems cannot be solved from the same level of consciousness that created them"; accessing more unified and unbounded levels of life will raise consciousness to a state where the solutions will emerge spontaneously.

At a conference last year called The United State of Women, Michelle Obama said "we stand stronger when we stand together." We will truly stand stronger when we stand united in our silence within. On the level of silence we are "the Goddess" truly in connection with everyone, and from that level we can create a beautiful, just, prosperous, and progressive world that supports all 7 billion people in health and happiness.