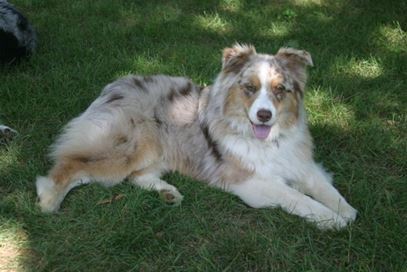 Eight years ago, when we paid $1,200 -- a sum considerably higher than we ever paid before for a pup -- Jenny was a seven-week-old, cute, rambunctious Australian Shepherd puppy.

She's now a 45-pound robust, gravelly-voiced girl, who along with her gentle brother, Hank, provides us with enormous pleasure. I really should say, joy.

From the outset, Jenny has always been insatiably curious and very opinionated. Unlike the five other dogs with whom we've shared our lives, Jenny's felt she must weigh-in on anything and everything in the neighborhood. Though we are the only house on 11 acres; part of our property abuts a neighbor's swimming pool.

Like all young children, our neighbors' kids were a noisy bunch, which aroused Jenny's not-so-latent herding instincts. Each time they were at the pool or in their backyard, Jenny saw and heard them through the chain link fence which separated the properties. No sooner did the kids venture out of their house, Jenny would run to the fence and bark incessantly in her Gravel Gertie voice. All attempts at acclimating her to their presence failed.

A palpable, not-so-neighborly tension arose. Clearly, Jenny's persistent barking made the neighbors' enjoyment of their backyard impossible. Believing that good fences make for good neighbors, we erected a six foot high, cedar stockade fence between the properties. We hoped this visual barrier would suffice and Jenny would quiet down.

Well, we were not so lucky. Now, instead of barking at the kids, she redirected her energies and ran to the northern end of the property, where through the chain link fence, she saw herds of deer needing her attention. And, since Jenny doesn't believe in doing anything quietly, the barking would begin at dawn and would have continued 'til dusk, had we let it. The neighbors were going insane. We extended the cedar fence, effectively blocking Jenny's view of the nature preserve which was home to the deer. We anticipated peace and quiet. But, Jenny had other ideas.

At the western end of our property, through the chain link fence, Jenny had a clear view of the road. Not a car or pedestrian could pass without Jenny going into high verbal gear. And, if someone happened to be walking with a dog, the decibel level became stentorian.

We extended the cedar fence to include that area.

By the time the fencing was completed, we'd erected 2,000 linear feet of six-foot-high stockade fence. To make it less noticeable, we had it stained a forest green. But that made it look like the Green Monster at Fenway Park. So, we planted 200 mature rhododendrons and Andromeda against the fence in an attempt to hide it.

No sooner was the fencing and planting complete, did Jenny figure out that if she positioned herself in just the right spot, she could still see the neighbors in their backyard. Their property is slightly elevated, and since a portion of our rear two acres was a scruffy deciduous forest, with trees having leaves only at their very tops, Jenny could see the comings and goings by looking above the fence, through the denuded lower portion of the forest, right into the neighbors' backyard. And, any movement over there, had Jenny barking incessantly.

Desperate to preserve good will, we decided to tear down the entire forest. This mammoth undertaking involved an eight-man crew working with chain saws, ropes, cables and heavy excavation equipment. They sawed down trees, removed and ground stumps, repositioned huge boulders, leveled the land and hauled away and dumped (at considerable expense) an enormous amount of forest debris.

After that phase was completed, we had to replant a forest.

A crew of 10 men worked for almost two weeks, bringing in tons of topsoil, barrels of fertilizer and truckloads of cedar mulch. At what had been the edge of the original forest, we built a 250-foot-long, 10-feet-wide and five-feet-high earthen berm. This construction was designed to elevate the new forest, effectively blocking Jenny's view of the neighbors' home. We decided to extend the forest to include the area facing the road, eliminating that vantage point for Jenny's roving eyes.

Where the scruffy forest once stood, we planted 145 mature evergreens: blue spruce, Norway spruce, giant thuja and white pines -- all at least 14 feet high, and many closer to 16-footers. The cost of the trees alone was over $50,000. We planted so many trees, we qualified for a tax-abatement as a tree farm -- a deduction we have declined to take.

Sitting down with a calculator earlier today, I began to add what we had spent over the last few years in fencing and landscaping alone, just to keep Jenny quiet. That sum floored me.

But, that's not the entire Jenny story.

Jenny is an adventurous pup and a relentless one -- once she has her mind made up about something.

Last October, just before bedtime, she met a skunk.

A spray directly to her face did nothing to deter her. Jenny carried on, waging battle with the creature until it was vanquished. When she came back, not only was the horrific odor overwhelming, but she was covered in blood. Not knowing at first it was the skunk's (and not hers), I reached out with bare hands, and began to clean her blood-soaked coat. Within seconds, I realized although she got away with merely a scratch above her nose, I had exposed myself to the possibility of rabies (skunks are among the most commonly infected wild animals).

A thorough search the following morning for the deceased skunk turned up nothing. Off I went for the first in a series of very expensive rabies shots, not covered by my health insurance.
To add insult to injury, the costs for Jenny's skunk adventure continued to mount. She headed to the vet for a check-up, where in addition to an office visit fee, we purchased every skunk odor removal product on his shelves. Since none of them lessened her odor, which by now had overwhelmed the entire house, several trips to the groomer were made. His ministrations did little good; Jenny still reeked and our house was almost uninhabitable.

A dinner party had been planned for the upcoming Saturday night. No way could we entertain at home, so we hosted eight guests at a restaurant, at considerable expense.

Over time, the odor in the house has dissipated, but eight months later, Jenny still smells of her victim, especially around her mouth.

Just a week ago, Jenny killed a rabbit. Many dogs kill rodent-like creatures; at least, this time there was no stench. But, because Jenny hid the kill from me, and went back for several portions of putrefied hare over a few days (when the average temperatures were near 90 degrees), she became violently ill with severe gastrointestinal symptoms. An overnight stay at the veterinary hospital set us back over $1,400.

Once home, she infected Hank with a milder version of what she had acquired, and he too was placed on anti-parasitic medications, at considerable cost.

Fortunately, both pups are doing well.

This incredible pup of ours, if we were to add it all up, has cost us nearly a quarter of a million dollars in eight years due to her rambunctious nature. She's an amazing and sweet little girl (if you're not a skunk or rabbit), and we love her far more than the twenty-five million pennies we've spent since she came into our lives.

After all, you can't put a price on love.