Consumer confidence is on the rise and home prices have rebounded slightly, but things are still pretty miserable for millions of Americans, according to the latest update of Huffington Post's Real Misery Index.

The index for July 2009 was 29.2, a slight decrease from June's 29.9, the highest number in the 25 years analyzed by the Huffington Post. Compared to June, the rate of inflation declined slightly, with smaller year-over-year increases in prices for food and medical care. But that good news was offset by other factors such as a rise in food stamp recipients and continuing home equity delinquencies.

To formulate our index, which provides a better snapshot of the economy than the often-criticized misery index (inflation added to unemployment), we used a more accurate unemployment statistic (the U6 formulation), with the inflation rate for three essentials (food and beverages, gas, medical costs), and year-over-year percent changes in credit card delinquencies, housing prices, food stamp participation, and home equity loan deficiencies. We gave equal weight to the broad unemployment numbers and the combination of the other seven metrics (with housing prices having an inverse relationship to the index). Thus, we added the broad unemployment U6 statistic (note: the current U6 was first introduced in 1994 so we used a similar number - the U7 - for the years 1985-1993) to the average of the seven other statistics.

For the current update, we've included the index for every year going back to 1985, the last year for which all the statistics were available, in a chart and graph.

At this stage in the recession, almost everyone is wondering if the economy has really hit bottom and whether the recovery has truly begun. Last week in a speech to other central bankers, Fed chair Ben Bernanke said "The economic recovery is likely to be relatively slow at first, with unemployment declining only gradually from high levels." And indeed, most indicators paint a bleak picture: Highest percent of foreclosures in three decades, slower-than-anticipated growth in GDP and the looming double-digit unemployment numbers.

One point of confusion is the recent rise in the Dow, despite the lingering economic malaise. Part of that is due to economic indicators meaning different things on Wall Street and Main Street. For example, rising unemployment may mean layoffs at companies that improve their bottom line.

"Our markets can be ahead of the pace of the recovery," says Art Hogan, director of Global Equity Product at Jefferies & Co. investment bank. "You get a lot of head-scratching from commentators that the market keeps going up but news doesn't correspond to it. It's an order of magnitude. People are looking across the valley and seeing that things could get better."

But for most Americans, the outlook remains gloomy and a vicious cycle continues - as more lose their jobs, more fail to keep up with mortgage payments and some fall into poverty, forced to take public assistance. 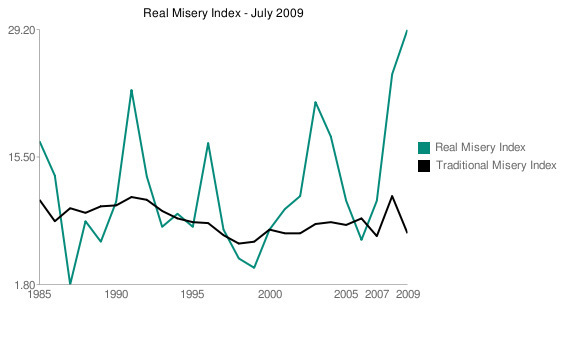