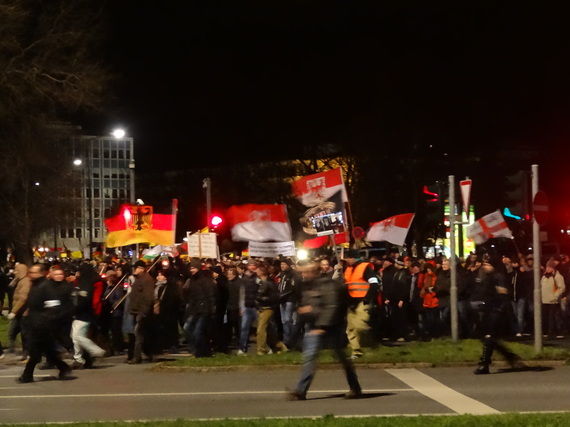 They seem to be everywhere these days, the so-called "losers of globalization," and their anger is allegedly transforming politics across the globe. From Brexit to the rise of Trump, globalization is the explanation and its losers are to blame. Some even extend the argument to the rise of Islamic fundamentalism and ISIS!

In a nutshell, the thesis holds that "globalization" has led to profound economic changes, which have transformed and divided societies. The ones who profit from these changes, mostly better educated and mobile (upper) middle classes that work in the service sector, are the "winners" of globalizations, and support the mainstream parties that have implemented neoliberal policies. The ones who suffer because of these policies, mostly lower educated men in the industrial sector, are the "losers" of globalization and support populist parties.

The "loser of globalization thesis" is quite simple, which explains its broad popularity. In fact, it has been popular for a long time, as it is merely the latest iteration of the decades-old modernization thesis, which has been used to explain the rise of nationalism in Europe in the 19th century for many decades. And since the rise of populist radical right parties in Europe started, in the 1990s, the "losers of globalization thesis" has dominated both the academic and public debates.

The thesis is often also quite elitist, which explains its popularity among the better-educated part of the population (in terms of the theory: the winners of globalization). It is about "them," the uneducated masses, not "us", the educated elites. They cannot deal with the realities of a changing world and find solace in the simplistic solutions offered by populists -- whereas we understand the complexities of the contemporary world and therefore support pro-globalization policies. This discourse was particularly dominant with regard to the Brexit referendum.

But for all the intellectual and personal comfort the "losers of globalization thesis" provides us, it is almost as stereotypical and simplistic as the populist discourse we abhor. First of all, in objective terms, there are not that many losers of globalization in most western countries. Almost everyone has profited in some way. Moreover, as several people have pointed out for the case of the US, but hardly anyone for Europe, many of the real losers of globalization are not the white working class, but the non-white underclass, of African Americans in the US and immigrants (and their descendants) in Europe.

The thesis probably is more accurate when we look at relative rather than absolute deprivation, i.e. if we define the losers of globalization as those that perceive themselves to be losers. These are people who might have objectively profited from globalization, but who feel (often correct) that they haven't profited as much as others. They will be actually correct: in the past decades, a small minority (sometimes referred to as "the 1%") has profited disproportionally from the globalized economy. And, yet, populist radical right parties attract only a small part of these relative losers of modernization -- even Brexit attracted "just" 52 percent of the people (just over half of "the 99 percent"!).

Another problem with the thesis is its theoretical underdevelopment. Why would the losers of globalization vote for Donald Trump, who doesn't fundamentally oppose neoliberal globalization, instead of Bernie Sanders, who does (as least much more fundamentally)? If this truly was about a fairer redistribution of wealth and bringing back good-paying working class jobs to Europe and the US, the populist left is a much more authentic voice of the losers of modernization than the populist right. And yet, even after almost a decade of Great Recession, the populist left is quite marginal, outside of Greece and Spain, while the populist right has reached unprecedented heights in many more countries.

The past years have taught us that a predominantly socio-economic anti-globalization discourse is only successful in countries that experience severe economic crises and/or economic inequality -- such as Greece, Venezuela, and the United States. In most countries, it is the socio-cultural translation of socio-economic grievances that fuels the rise of the populist right. While people might be frustrated or worried about their socio-economic situation, it is the link to socio-cultural threats -- from China to the Middle East and from (Muslim) immigrants to "femiNazis" -- that mobilizes them to voice support a radical alternative -- rather than exit with a non-vote or expressing loyalty by voting for the mainstream alternative.

In short, support for right populist politics is not a matter of either economic woes or xenophobia, it is both, wrapped up in a boiling hot blanket of anti-establishment anger. This also means that populist right politics will remain viable after the Great Recession has ended, as we can see in the largely post-recession US. Hence, simply providing a more fair redistributive socio-economic policy is not going to get rid of populist right politics -- although it will undoubtedly limit its success. First of all, part of the population is Islamophobic and even racist, irrespective of their socio-economic position. They might never support liberal democratic politics within a multi-ethnic society. Second, many others are deeply suspicious of the political establishment, which includes academics and journalists, and will have to be convinced, over a long period of time, that these new policies are indeed profitable for them and that "others" are not profiting (much) more. That is the real challenge for the future: to create a politics that is more fair and inclusive to all, both the (mostly white) relative and the (mostly non-white) absolute "losers of globalization".