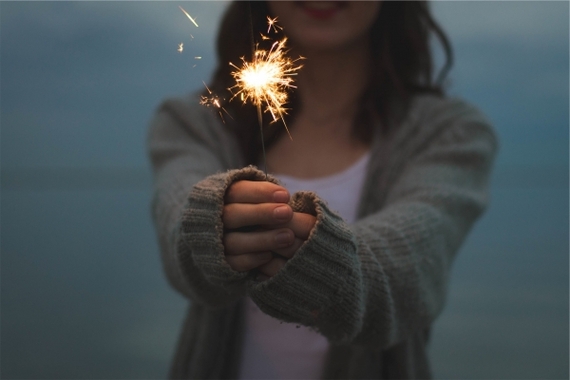 I believe in God. I pray daily and would like to think my faith is strong. I do not have to mentally think through or wrestle with the concept of God's existence on a daily basis in order to believe, I just accept that it is truth and move on.

My grandpa's death caused quite a ruckus in my faith department. I've battled before with trying to prove God existed scientifically in my head, only to realize I can't prove anything. I then resort to being content with simply believing and having faith. Upon hearing of my grandpa's death, though, I started thinking through the fact that he is literally in Heaven. I am fine to imagine God up in Heaven looking down on us, but it makes it a bit too real to think my grandpa is there with God as well. Someone I physically knew on this earth is now in this space called "Heaven" that I can't explain. Heaven was once a mental separation from my life on earth, but suddenly they became merged.

I can believe in Heaven from a far off, faith-based sense, but I start to get a little doubtful when I think through its tangible existence. I started to realize that when I mentally try to wrap my mind around the concept of Heaven, I can't. I can't make logical sense of it or prove it, and my brain is really uncomfortable with that.

So, I started wondering. Maybe Heaven doesn't exist. Maybe we just go straight to nowhere when we die. And bam, that's it. I started panicking, trying to deny any logic-derived thoughts or doubts in my head and adapt a child like faith. That didn't work, and I became really frustrated. I was created with a brain, and if God didn't want me to use it as a part of my belief in Him, then why give me the ability to think logically at all?

God sometimes speaks through the obvious and simple, though, and instead of having to take a huge course on apologetics and dive into scientific proof and data to attempt to calm my slight existential crisis, He provided a different answer for me. Here is it:

I exist. And that in and of itself is illogical.

Existing as a human being, with all of its 25,000 genes, complex proteins, interconnected minuscule cells that keep us in homeostatic balance on a millisecond by millisecond basis, is impossible. I can hardly build something with legos, let alone think up and create a human. You can't invent a human. The invention of a DNA, cells, proteins, organs, neurons, nephrons, and hepatocytes, that somehow all work together in perfect, mind blowingly detailed harmony, is borderline impossible. It can't be scientifically explained and is impossibly illogical at best.

But here you are, existing. Against all human logic.

Its not logical, it can't be proved, you can't wrap your mind around a human body being built from something (or nothing,) and it could even be outside of the realm of possibility that it even happened.

And yet you still keep reading this blog and being alive.

And suddenly it hit me. This concept applies to the existence of Heaven as well, and to everything else that exists that we can't prove. It's not logical because it is outside of our logic system. Does that mean it doesn't exist? No.

It just means there's a bigger logic system at play that we were not meant to tap into.

If we have a Creator who has a thing for creating humans and the universe and gravity and light based on His own logic system, not ours, then anything He chooses to do can be outside of our logic and science, including His very existence.

Heaven exists outside of human logic. I, as a human, was made outside of human logic. The space time continuum is hardly logical. God can operate within our logic system, but doesn't always choose to do so. He's got His own thin goingg, and we as humans try to say that because its not within our logic based system, it can not exist. Even though we exist.

Its a human created paradox that we are told is called "science." The creation telling the Creator that because they don't understand Him, He can't exist. All while His own creation goes on existing.

Sometimes you don't need an apologetics course as much as you need to lift your hand to your beating heart and wonder how each beat is possible, and how many laws of science and logic the invention of your heart had to break.

And there you have it. It's your very existence, the fact that you are able to read this, that may be the most scientific evidence in the world.