Ask most people what happens to prophecies in the Bible, and the response will be that they get fulfilled. But that popular answer is based on a fundamental translation mistake. The Bible doesn't say that prophecies come true.

Here's what led to that widespread misunderstanding. 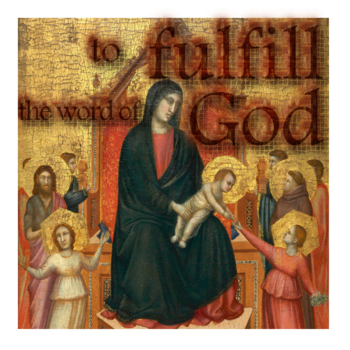 Greek has a verb plerow, commonly pronounced “play-ROH-oh.” It primarily means “fill,” and appears throughout the Bible. Romans 15:13, for example, reads, “May the God of hope fill [plerow] you with all joy.” In Matthew 13:48, the word refers to a dragnet that is “full” of fish. And so on.

This look at the context of plerow is helpful, because context is the best way to figure out what an ancient word means, as I explain in And God Said: How Translations Conceal the Bible's Original Meaning, and as I summarize here.

Because the English word “fulfill” contains the word “fill,” translators wrongly thought that the Greek word plerow could mean “fulfill” in addition to “fill.” But language doesn't work that way.

Just as “supplant” in English is different than “plant,” and “supply” is different than “ply,” plerow doesn't jump in meaning from “fill” to “fulfill.” These pairs only have superficial similarities in common, and looking at internal structure in this way leads people astray. (Read more about why.) 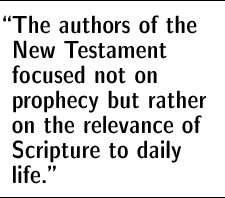 Rather, the proper way to figure out what plerow means when it's connected to an Old Testament quotation is to keep looking at context. And a clear picture paints itself.

But Genesis 15:6 isn't a prophecy. “Abraham believed God” is about the past, not a prediction about the future. It can no more come true, or be fulfilled, than any other past-tense statement, like “it rained yesterday.” Clearly, “fulfill” is the wrong translation for plerow here, because there's no prophecy to be fulfilled.

Other instances are similar. For example, Matthew 2:13-15 has Joseph fleeing to Egypt with Jesus and Mary to “fulfill ... 'Out of Egypt I have called my son'” (NRSV). Matthew is quoting Hosea 11:1, but again, Hosea 11:1 isn't a prophecy.

These and many other examples demonstrate that the right translation of plerow is “match.” The New Testament passages match the Old Testament ones. James 2:23 matches Genesis 15:6, Matthew 2:13-15 matches Hosea 11:1, and so on.

This use of one text to match another was so popular in antiquity — among mainstream Jews as well as early Christians — that it has a scholarly name: “proof text.” (The name is, unfortunately, misleading, because the texts aren't proofs in the way proof is now understood.)

Something else is important about proof texts: The two texts only have to match partially. A good example comes from Judaism. The rabbis of old put Isaiah 45:7, about God creating both peace and evil, into the daily liturgy as a proof text. But they revised it to read, “God creates peace and fashions everything [not evil],” because they didn't want to say that God creates evil. Even more starkly, the rabbis omitted the word “not” when they used Exodus 34:6-7 as a proof text.

This more accurate understanding of plerow sheds light on the virgin birth as described in Matthew 1:22-23, which is the most famous alleged prophecy. The NRSV translates that familiar text as, “All of this [that is, the virgin birth of Jesus] took place to fulfill [plerow] what had been spoken by the Lord through the prophet: 'Look, the virgin shall conceive and bear a son, and they shall name him Emmanuel.'”

But as in the other instances, Isaiah 7:14 is not actually a prophecy, and Matthew is quoting Isaiah as a proof text. “Fulfill” is the wrong translation of plerow here.

Furthermore, this is a case where the details match only in part. Isaiah 7:14 isn't about a virgin except in a Greek mistranslation. More obviously, the name of the child in Matthew is “Jesus” while the child in Isaiah in called “Emmanuel.”

But — in spite of professional atheists and even some scholars who like to use these discrepancies to discredit the text — Matthew's point, as expressed in the Greek, is that the birth of Jesus matches the Old Testament text of Isaiah 7:14.

Matthew 1, then, is an example of how the authors of the New Testament focused not on prophecy but rather on the relevance of Scripture to daily life — a message they meant to be timeless, and one which we preserve only with a more accurate understanding of their words.