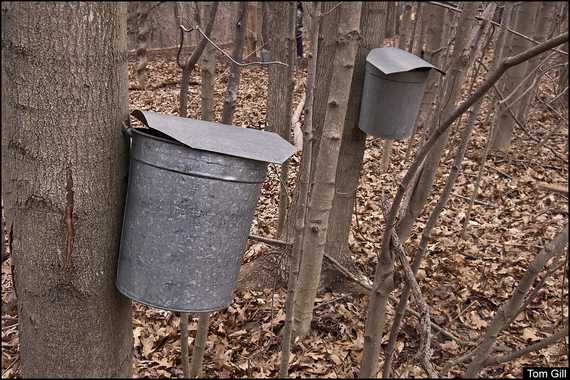 Most of the northern United States remains in winter's tight grip, but one sure sign of spring is upon us - Maple Sugar Time.

The reason maple sap begins to flow this time of year is the early spring weather. Freezing nights and above freezing daytime temperatures are common in late winter. This alternating freezing and thawing is the mechanism that starts the sap flowing within the maple trees. Cuts in the tree's bark allow the sap to exit the tree. 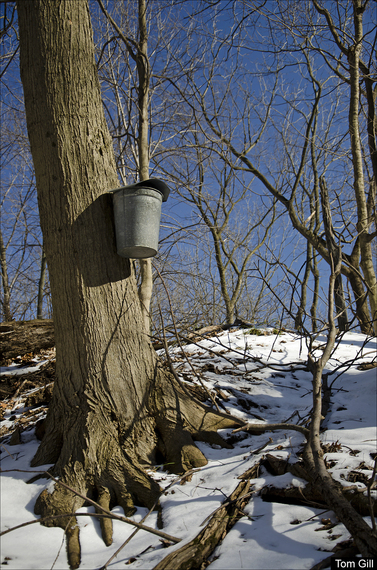 The practice of collecting sap from maple trees predates Europeans in America. Native Americans used maple sap in cooking and ingested maple sugar for quick energy. Early methods of sap collection included cutting a notch in the Xylem of the tree, creating a wound in the tree from which the sap could flow and diverting the dripping sap into a bowl for collection. The sap was then brought to a slow boil by adding hot rocks directly to the bowl. This created the condensed syrup. 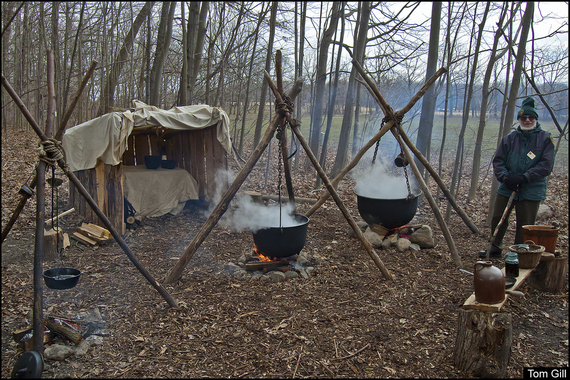 European settlers streamlined the process over time. Instead of making notches in the tree, they pounded metal taps called spiles into holes drilled about two inches into the trees. From these spiles, dripping sap collected in buckets. Then, sap was dumped from full buckets into large kettles and boiled on open fires until it was reduced to syrup. When the liquid spanned the round opening formed by a bent stick (like soap on a child's bubble wand) the syrup was ready. 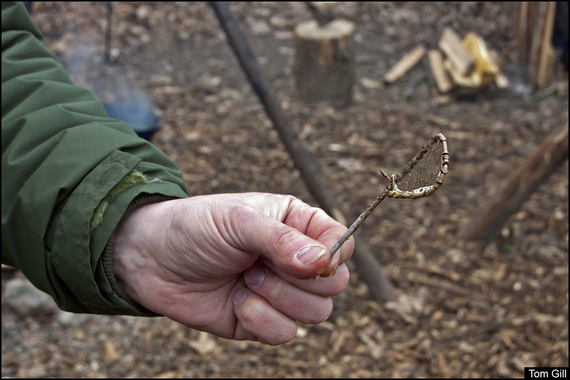 This was a slow process, as it takes approximately 40 gallons of sap to produce one gallon of syrup, depending upon the sugar content of the sap. More modern methods were invented in the early 1900s, including a wood-fired evaporator. The evaporator was long and shallow, allowing the sap to heat up faster, and the steam to escape more easily due to the greater surface area. This reduced production time and increased the amount of product made. 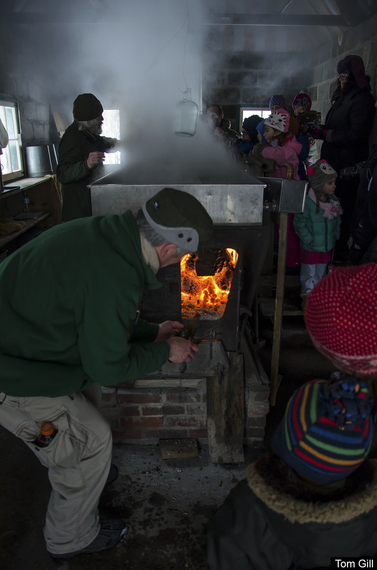 Special buildings called sugar shacks were constructed to house the evaporators and to keep workers out of the elements. These structures also held the raw sap, empty bottles and the finished product. A welcome reprieve from the cold March weather, the sugar shack was similar to a sauna, warmed by the wood fire and filled with steam from the evaporating sap. 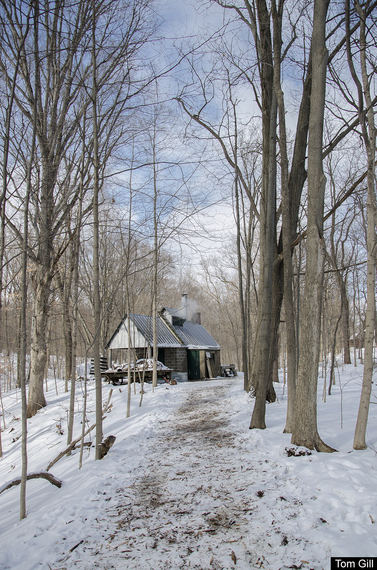 The finished syrup reached very hot temperatures just prior to bottling. Empty glass jugs were hung over the evaporator to warm up slowly. Adding hot maple syrup to cold glass jugs would result in the jug shattering, so this warming method was used to prevent breakage. 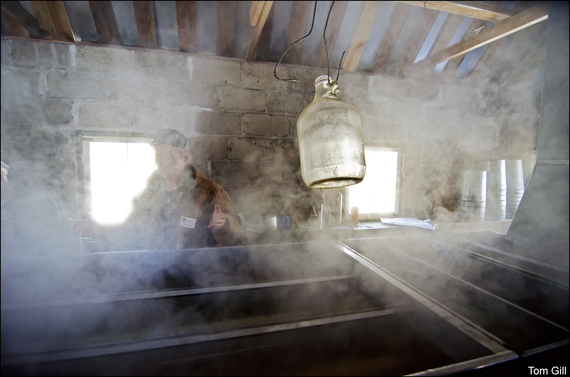 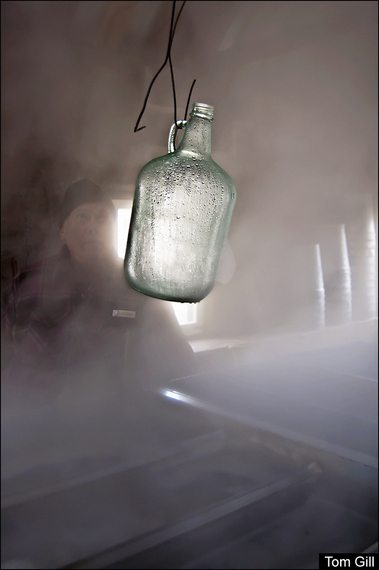 This sweet commodity was used to sweeten foods all year long and was produced solely in the northern parts of North America. Other sweeteners, such as cane sugar and molasses, were shunned in the North during the Civil War. These were products mainly from the southern areas of America and northerners often refused to use products native to the southern states. 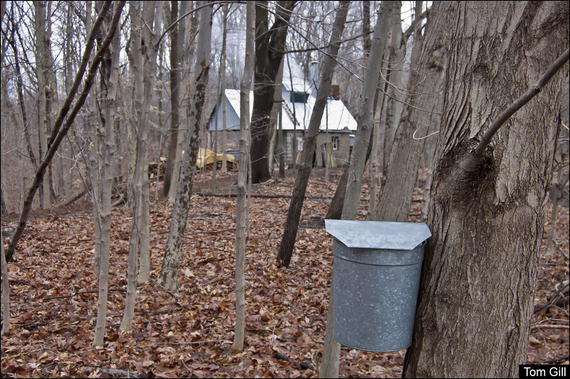 One of the many places visitors can see the maple sugaring process in action today is the Indiana Dunes National Lakeshore in Northwestern Indiana. Maple Sugar Time takes place the first and second full weekends every March. The event offers visitors the opportunity to see the various sap collection and refining processes at the Chellberg Farm, a historic farm located within the National Park. 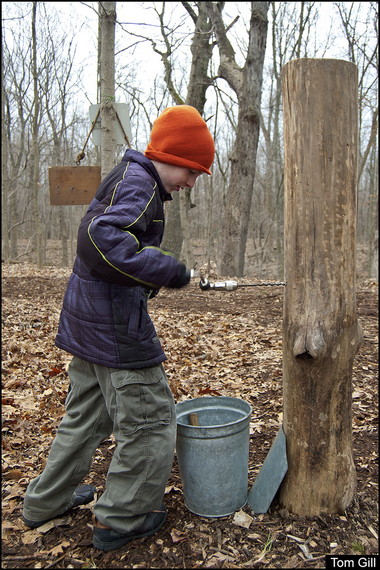 This year, Maple Sugar Time takes place March 7, 8, 14, and 15 from 10 am to 4 pm. Rangers and volunteers stationed along the path will demonstrate the many ways maple sap has been collected and refined in America over the years. Kids can also try their hands at drilling and tapping a tree. The event is free, and always informative and fun for the entire family. http://www.nps.gov/indu/index.htm 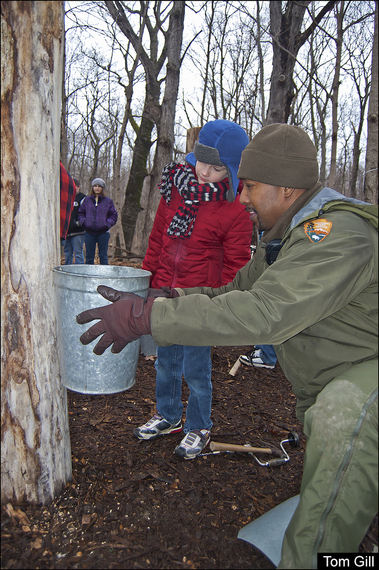 An early March visit to a local sugar bush to witness the sap running is a sure way to welcome back spring. And, it's a great opportunity to take home a pint or two of local maple syrup to enjoy the whole year through.