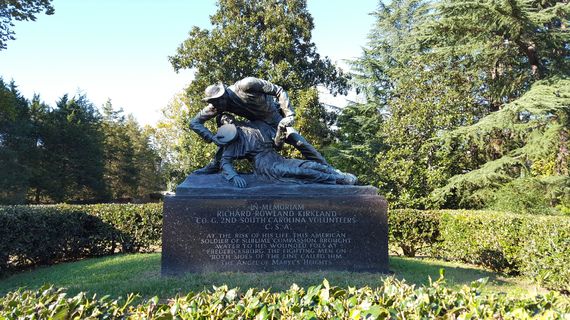 So, times are contentious right now....true enough. But I have heard some say that tensions and divisions have never been higher in U.S. history...and that is patently false. After all, during the US Civil War (1861-1865) some 620,000 to 750,000 soldiers died (that's a combined estimated total of the Union and Confederate soldiers), with so many civilians also caught in the cross-fire. Therefore, there have been much tougher times in the history of our country, with our own Civil War being the showcase example of that.

But it is an act of great *civility* and *humanity* which is portrayed via a Bronze Statue in Fredericksburg, Virginia that models something important for us to remember...and to replicate...in the immediate wake of the 2016 Presidential election, and in the days, weeks, and months that shall follow. Depicted in that bronze is Sergeant Richard R. Kirkland and a fellow soldier, his enemy.

The Battle of Fredericksburg (1862) was a terribly bloody battle, with the Confederates holding Marye's Heights and the Union attempting to ascend the great hill and take it. It was a bloodbath. Confederate sharpshooters decimated the Union soldiers, with dead and wounded covering much of the ground around the hill. For two days following the battle, Union soldiers, caught between the lines, were calling out for water. But none could be brought to them, as it would have been suicide for a Union soldier to attempt to do this.

And then something beautiful, kind, and almost miraculous happened.....Sergeant Richard Kirkland, a South Carolinian, filled up several canteens with water, stepped over the stone wall separating the Union and Confederate soldiers, and for two hours he brought water to his enemies, the wounded Union soldiers. It was an act of great civility, courage (for at first he was shot at by Union soldiers), and utter humanity. Sergeant Kirkland has since been known (even immediately, by soldiers on both sides) as 'The Angel of Marye's Heights.' Rightfully so. An angel he was and shall ever be. This Michigander, now living in Virginia, is very grateful to the blessed Sergeant.

As fate would have it, Sergeant Kirkland died in battle at Chickamauga, Georgia, in September 1863. Some might suggest that he was foolish for helping his enemies in Fredericksburg. I think not. Rather, I believe that because of his great humanity, he has established a high water mark for courage, kindness, civility, and humanity...during even the most difficult of times.

I voted. You voted. Perhaps you and I voted for the same candidate. Perhaps we didn't. Perhaps you think I'm wrong. Perhaps I think you're wrong. That's the nature of democracy. But in these difficult times, I believe the model of Sergeant Kirkland is instructive. I believe we can learn from him. Indeed, at the end of the day, I believe that the 'Angel of Marye's Heights,' Richard Kirkland, is a model of grace, dignity, and humanity.

May all of us strive to rise to follow that model in the coming days, months, and years. After all, the current division and divisiveness in our country is not useful, it is not productive. The course that we best follow is one of civility and humanity, following in the footsteps of Richard Kirkland. I believe we have a moral and religious imperative for kindness and generosity. It is the only way forward.