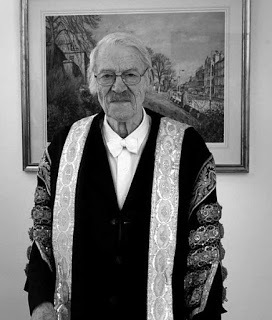 You have shock jocks like Dice and Howard Stern. But someone named K.J. Dover an Oxford classicist who wrote Greek Homosexuality may have been the ultimate intellectual shock jock. In a review of a newly released edition of the tome by the deceased academic in the TLS ("Textual Orientation," 7/27/16) Tim Whitmarsh says,

"Philosophically he was what you might call a fundamentalist realist. He believed that most people grope their way through life myopically, shielded from the truth by a fug of ignorance, pusillanimity and squeamishness, and it is the duty of the academic--and specifically the philologist--to confront reality."

Whitmarsh goes on to explain how this epistemology led Dover to undertake his magnum opus and quotes the author thusly,

"I am fortunate in not experiencing moral shock or disgust at any genital act whatsoever, provided that it is welcome and agreeable to all the particpants."

One wonders what Dover thought of fist fucking or the use of broomsticks and other objects that may insult the anus. But you have to appreciate his no holds (or holes?) barred scholarship at a time when academic is so oppressed by Orwellian "newspeak." What would Dover have said to students who found Sophocles Oedipus Rex triggering? What is even more interesting about Dover is that he seemed to subscribe to Flaubert's dictum,

"Be regular and orderly in your life like a bourgeois, so that you may be violent and original in your work."

Whitmarsh remarks that rather than being some kind of campus hellion or gaining a reputation for upholding the legacy of crossing the aisles (sexually that is) like the Bloomsburyites, "he was married to one woman for sixty-three years" and "was an establishment man, and a traditional classicist of the most conservative type." No doubt about it Dover, who died in 2010, was a really cool guy.