Ships these days may say they're aiming for islands or lowering anchor in the globe's most perfect ports. But, for most, the real goal of cruising isn't to go anywhere at all. It's to exist at sea. Sun and winds scrub the deck, everyone floats on an ocean of cuisine and eventually washes up at the bar or buffet.

One of the best ways to enjoy pure sea--plus an onboard life that isn't chopped up by stops and starts, gangplanks and tenders--is to sign on for a six-day Atlantic crossing aboard Cunard Line's highbrow Queen Mary 2, one of the world's most famous ships and one that will soon be back afloat following extensive renovations. 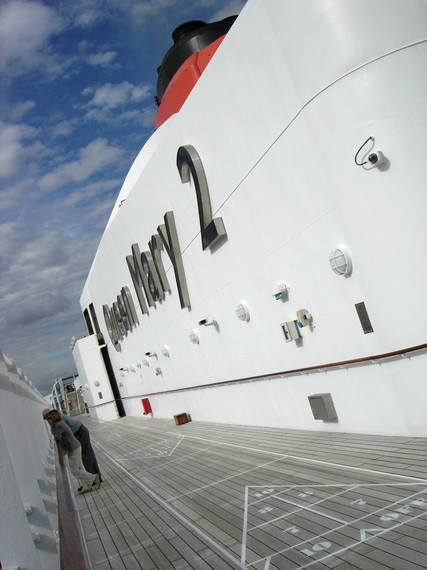 To this day it seems like a strange dream to me that nearly all of the Atlantic liners--the Queen Mary 2's direct ancestors--are gone. Wooden deck chairs, tartan blankets, beef bouillon in bad weather, rope coils called "quoits." Little traditions like these filled up your five or six days out of sight of land. That, and making it through a high and deep domain that is as dangerous as the moon.

I grew up in Chelsea on Manhattan's West Side, watching from our rooftop as liners like the original Queen Mary, the France, and the United States steamed up the choppy Hudson. I would bring binoculars to keep track as they obeyed their tugboats and disappeared into their piers. Then I'd run up the stairs again to see them sail back out, and wish I could invent a way to get aboard.

Later, I did sail out on the first Queen Elizabeth, when my parents moved us to London. My brother and I tried to explore every deck of this steel world and began to believe that it was a building like the one we lived in, one that was tipped on its side.

On my QM2 crossing from Southampton to New York a few years back, my wife Kathy and I were glad to find that many of the old North Atlantic traditions are still alive onboard. And when the trip ran into spits of slanting rain and wind, this felt almost historic, like the black-and-white shots you see of travelers trying to balance on a tilted deck. 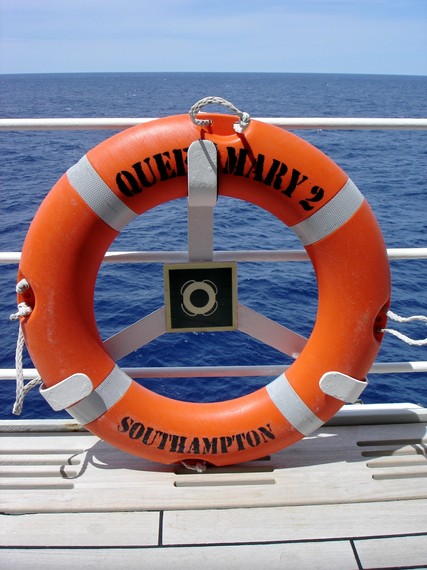 As the Queen Mary 2 sails past the west coast of Ireland and dives headfirst into the open sea, Kathy and I and dozens of other passengers are out along the railings or bundled up in the classic wooden deckchairs that are a Cunard trademark. At exactly noon, Captain Nick Bates, a talkative Irishman, comes over the loudspeaker to give us an update on conditions.

Ocean temperature: 62 degrees. Air temperature: 57 degrees. Wave heights: Up to 8.5 feet. Wind speed: Force 6 (on a scale of 0-12). The captain calls this "a pretty strong breeze." Bates signs off after reminding us to set our clocks an hour back that night. "Again?" says Kathy. "No jet lag on this trip. We're gaining an hour almost every day we sail."

With its imposing lobby and steel-and-glass Art Deco murals, the Queen Mary 2 gives you the sense that it's more landmark than cruise ship. Something along the lines of the Empire State Building or Rockefeller Center at sea. If it's sheer size you want in your cruiser, the QM2 delivers, though in this age of floating resorts there are still bigger ships out there. 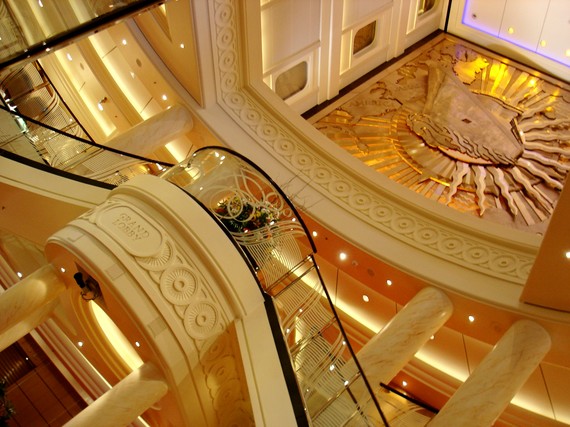 A few fast facts: At 113 feet longer than the original Queen Mary, the Queen Mary 2 is more than twice as long as the Washington Monument is high. Her mighty ship's whistle is audible for more than 10 miles. Unusual interior features include an English pub with real ale, a bar just for champagne and a Winter Garden. She has five, count 'em, five swimming pools including one with a retractable dome.

The QM2 has the largest library at sea and, without doubt, the best bookshop. Lectures are normally a big deal on board. On particular voyages you can study acting with the Royal Academy of Dramatic Art and learn about the constellations with telescope-brandishing experts from the Royal Astronomical Society.

And even though most letters these days are delivered electronically or by plane, the RMS Queen Mary 2 is the holder of an old and proud formal title. She's a Royal Mail Ship--a designation originally awarded by Queen Victoria back in 1839 which gave company founder Samuel Cunard the first ever license to deliver mail across the Atlantic.

Three quarters of the QM2's cabins have a private balcony but, on Cunard, passengers like bigger spaces, listening to piano concertos in ornate theaters or drinking glasses of wine in bars lined with blurry paintings of Humphrey Bogart, Anita Ekberg, and Lauren Bacall. This is the National Public Radio of ships, but without the pledging. Some QM2 staterooms come with personalized stationery. Pets aboard get a "complimentary gift pack filled with animal amenities."

Every afternoon white-gloved stewards start water boiling all over the ship. Scones are arranged, cream is poured and crusts are pared from hundreds of cucumber and tomato sandwiches. It is time for tea. As one onboard menu describes it, this between-meal tradition is "poured from Wedgwood pots, served in Wedgwood cups." Elegant, yes. Plus most of the brews are dark and infused with flavor--not like the stuff that comes from teabags.

I keep trying special blends I've never heard of before like "Queen Ann" and "Assam Pure" and "English Afternoon" which, one of the stewards informs me, is made from "teas all grown above 4,000 feet." In fact, this high-altitude tea is good. It's almost airy. But why is it for afternoon? "Well sir," responds the steward, "you'll have to ask the English. I myself am from India." 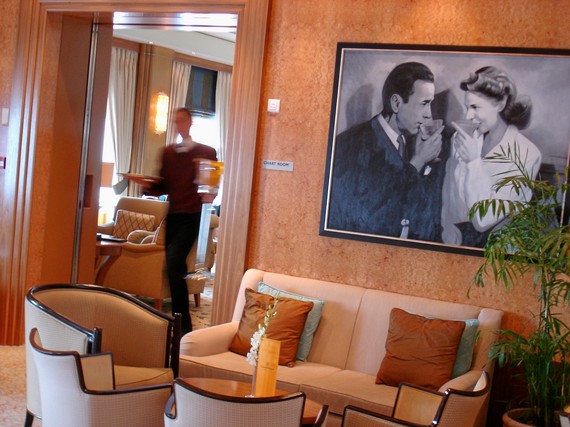 After tea, I am awake and ready to walk laps on deck. But Kathy has a different plan. The QM2 happens to be the only cruiser afloat with a planetarium, and she has two tickets for the show: "Cosmic Collisions" narrated by Robert Redford.

Just as we're tipping back in our seats and the dome overhead is darkening to show comets and planets, one of the ushers comes over the P.A. "The show you are about to see," he warns "has fast-moving objects. It's not for those of a nervous disposition. If you feel dizzy, look away. The feeling will pass."

We don't get vertigo, but with the swirling constellations and the rising and falling of the ship, I feel like I've been launched on an important mission to save the earth from meteor attack. Robert Redford doesn't agree. He isn't interested in my role and drones on instead about scientists and the tools of astronomers. Dawn comes to the theater and all of the stars disappear.

Still, as we discover, there are plenty of nighttime pinpricks and a cloud-covered moon out on deck. The evening before we are due to arrive in New York everyone sets an alarm to wake up before the sun. The Americans on board know that our parents or grandparents must have come into port this way, either as immigrants or on the return leg of an Atlantic crossing.

At 5:00 a.m. we are expectant. Balancing cups of coffee. More nervous than in the planetarium. "Watch the ship's smokestack," says Kathy as the Verranzano Bridge, which connects Brooklyn and Staten Island, begins to form out of the fog just ahead. 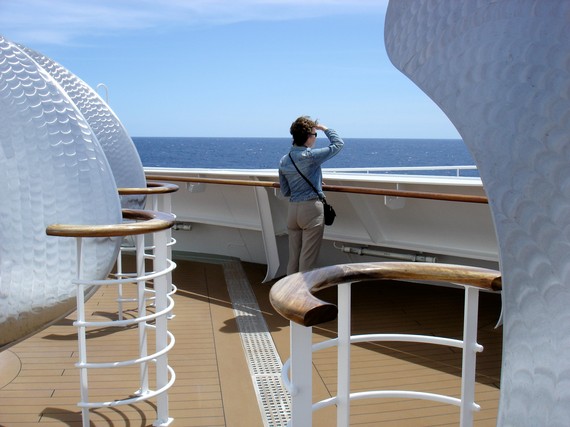 There are some squeals on deck as we get close. With our orange-and-black vertical top hat we are too tall a ship to make it. We're going to hit the bridge. Split its roadway.

The tip of the Queen Mary 2's smokestack soars high on a cresting tide and wave. The cables of the Verranzano cringe.

It is the sound of a wooden deckchair collapsing.

The Queen Mary 2 has slid silently and perfectly beneath the bridge. There is some clapping. Cameras click. The harbor fog has thinned.

One corner of a Wall Street building flashes suddenly with sun. Windows wink with the light.

The Statue of Liberty raises her arm to greet us.

It is morning in New York.

* * *
One of Peter Mandel's books for children is about an ocean crossing: My Ocean Liner: Across the North Atlantic on the Great Ship Normandie (Stemmer House).