I wore a red and white uniform, I was ten years old, and the subject of the "blockade" was barely mentioned in the ideological books they gave me at school. Those were optimistic times and we believed that the F1 cows* would give enough milk to flood the streets of the whole country. The future had those golden hues that never showed themselves in our faded reality but we were a too colorblind to notice. We thought we had discovered the formula to be among the most prosperous people on the planet, so that our children would live in a country with opportunities for all. 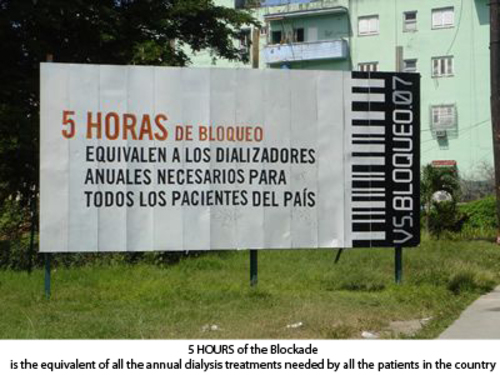 From the podium a bearded leader defiantly pointed to the North, because he counted on the pole of the Kremlin subsidy to vault over any obstacle to the construction of communism. "Despite the blockade..." we said, with the same conviction that in years past we'd talked about the ten million tons of sugar*, coffee growing all around the cities*, and a supposed industrialization of the country that never came. We had to cut short our dreams when the flow of oil and rubles abruptly stopped. The years came of beginning to explain the setbacks and comparing ourselves to the poorest nations in the region to make us feel, if not happy, at least satisfied.

As I began my adolescence, the issue of trade restrictions was on nearly every billboard in the country. At the political rallies we no longer shouted, "Cuba yes, Yankees no" but a new hard-to-rhyme slogan: "Down with the blockade." I looked at my nearly empty plate and couldn't imagine how they had managed to blockade our malangas, orange juice, bananas and lemons. I grew up repudiating the blockade, not because I swallowed the line about the country we could be if the blockade weren't preventing it, but simply because they tried to explain that everything that wasn't working was a result of it.

If my friends were leaving the country en masse, it was because of the United States policy of harassment; if the cockroaches were crawling all over the walls at the maternity hospital, it was the fault of the North Americans; even if a meeting at the university expelled a critical colleague, they explained to us that he had fallen under the ideological influence of the enemy. Today, everything begins and ends with the blockade. No one seems to remember the days when they promised us paradise, when they told us that nothing -- not even the economic sanctions -- would prevent us from leaving behind our underdevelopment.

F1 cows: A breed that is a cross of Holstein and Zebu (Cebu) cattle. Fidel Castro believed these cattle would allow Cuba to export beef and dairy products. It didn't work out; both meat and milk are severely rationed in Cuba.

Ten million tons of sugar: In 1970 Fidel Castro turned the resources of the entire country to a achieving a record ten-million ton sugar harvest, even "rescheduling" Christmas for July so as not to interfere with the work. The target was missed and Cuba's sugar crop has declined ever since; in 2009 the total was barely over one million tons.

Coffee growing in the cities: Fidel Castro had a plan to grow coffee in Havana despite expert advice that the climate was unfavorable; it didn't work out.