As American pundits are discussing the Clinton Cash affair and worrying about possible undue foreign influence on U.S. foreign policy via donations to the Clinton Foundation, including donations from Germany, a similar debate is unfolding in Berlin with regard to possible undue American influence via US-funded foundations and think tanks operating in Germany.

The discussion is driven by a highly critical book about media manipulation that is rapidly climbing the bestseller lists in Germany, written by a former pillar of the journalistic establishment . 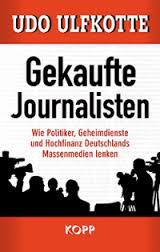 Udo Ulfkotte, the author of the book Gekaufte Journalisten ("Bought Journalists"), is decidedly a mixed bag.

One the one hand, he spent 17 years working as a foreign correspondent for the Frankfurther Allgemeine Zeitung, one of the most respected and widely read broadsheets in Germany, which lends him considerable credibility. On the other hand, the book's ranting style and Ulfkotte's frequent off-colour remarks do sometimes make him appear like a slightly unhinged conspiracy theorist.

Ulfkotte's background, style and idiosyncrasies aside, the book's wide readership in a key European state alone means that media pundits, think tankers and foreign policy wonks in the United States, the European Union and elsewhere should take note. However, so far, coverage in the English language has been minimal, and largely restricted to fringe media.

In this spirit, in advance of the book's planned publication in English, below my translation of some choice book passages on what Ulfkotte calls "transatlantic think tanks" and foundations:

Whatever you make of all these claims, one very valid question does crop up.

If Americans get so worried about the comparatively small amounts of foreign money in their political system, as seen in the current Clinton Cash debate and previous episodes involving alleged undue foreign influence via think tanks, what about the influence of American funding abroad?

Maybe citizens and leaders of other, smaller countries sometimes have a point when they get concerned about American influence via foreign-funded foundations, think tanks and NGOs on their own democratic systems?

Disclaimer: While the author of this blog works part-time for Transparify, an initiative advocating for greater think tank transparency and research integrity, this blog was written in a private capacity and should not in any way be taken to reflect the views of Transparify. The blog above should not be taken to imply that the author endorses (or rejects) any of Ulfkotte's concrete claims or broader theories. The author did not fact-check any of Ulfkotte's claims.