Peanut butter cup trifle -- your new favorite dessert! It's so easy to make, and serves a really big crowd. Hooray for that. 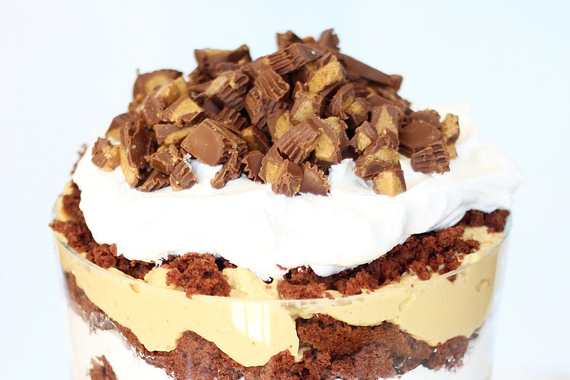 Recently, we were out to dinner with friends when we started talking about peanut butter – why?? I don’t remember. I guess if you love this food, it becomes a regular dinner conversation topic? Maybe that in and of itself should be a sign that I’ve taken things too far! 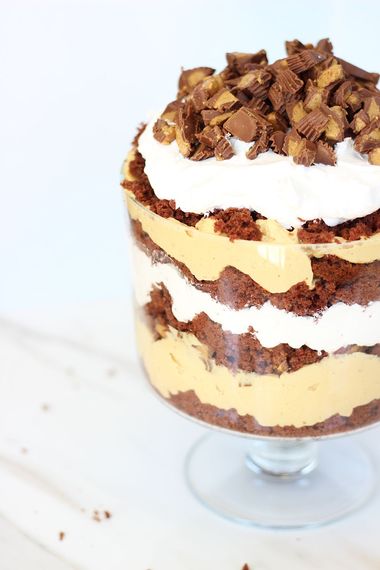 In any event, my S.O. was telling our friends that we have so much peanut butter in the house that we have backup containers for our backups. This is true. We could feed an army on peanut butter. I count 5 containers right now, and we are not talking about the little ones. The big tubs. The ones you buy from Sam’s Club. Those. Not exaggerating. Should I insert photographic evidence? Nah, I’ll spare you.

Then I was explaining that we really “need” to have a lot of peanut butter on hand because I eat it 3x/day, every day. The entire group gawked at me like an alien with three heads. Um, I guess that’s a lot more than a typical human consumes? At what point do I admit that I may have a peanut butter problem? Because, see, I view all of this as normal. 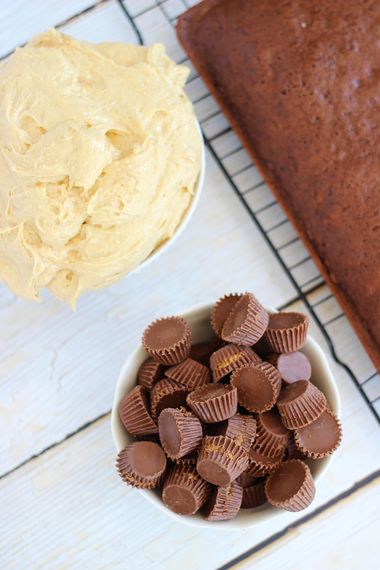 Also normal: buying a 3lb. bag of mini Reese’s cups. It’s normal, dangit. Stop looking at me like that.

I’ve been meaning to make a peanut butter cup trifle for a while now, and just hadn’t slapped it together yet, but the enormous bag of mini Reese’s gave me the push I needed to make it happen. Layers of moist chocolate cake, luscious peanut butter pudding, whipped topping, and chopped Reese’s cups are a chocolate and peanut butter-lover’s delight. 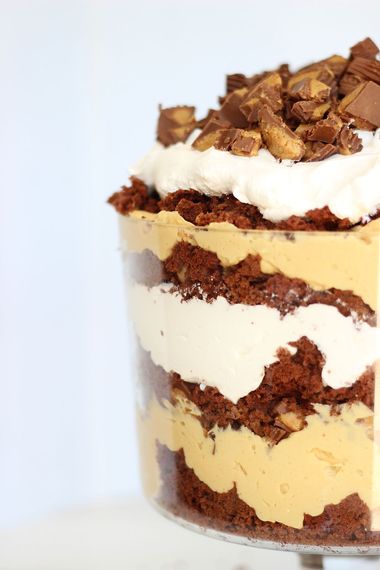 Just look at it! It’s so simple to make, but it looks so beautiful and elegant! This thing makes a statement. It’s also weighs a TON. Seriously, it has to weigh 10lbs. It’s a beast! I don’t even know how it’s possible because it’s just cake, whipped topping, pudding, and Reese’s cups! Many of those things aren’t what you’d consider “heavy”, but this trifle is a doozy!

I threw this thing together very quickly. And when I say I “threw” it together, I literally mean that I threw it together. Trifles don’t need precisely even layers, and they don’t have to be perfect – that’s actually part of their charm! Or am I just making excuses for the fact that my trifle has wonky and uneven layers, and is bursting over the top of the dish?? Maybe a little. Just toss everything together layer by layer, and you’re done! 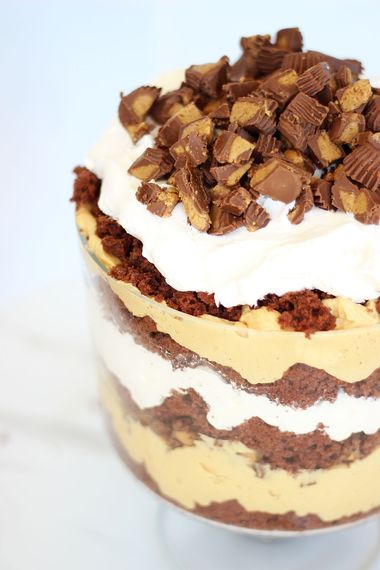 It’s so luscious, decadent, and the ultimate in combining peanut butter with chocolate. It’s easy to make, but definitely impresses!

Get the Peanut Butter Cup Trifle Recipe on Food Fanatic!

Sarah has an affinity for shiny golden objects, hence the name of her blog: The Gold Lining Girl. Peanut Butter's the one thing she'd take to a desert island, so it's only right that she's our Peanut Butter Fanatic!