For the past few weeks, my son's third grade class has been studying persuasive writing. I am thrilled about this for several reasons, the primary one being that Jack tends to think, "You should do X because I like it." is a sufficiently compelling argument for anything.

I have suggested that it's not, but as all parents know, your own children often do not hear you in the same ways they hear other trusted adults, like teachers. Reason #981 that I have zero interest in home-schooling the boys.

That his teachers have said persuasive writing is cool and useful has made it so, and I have enjoyed recent examples of this work directed just to me.

I received this email from Jack last night around 7. He typed it while I was in the room, but instructed me to avert my eyes until he'd finished writing and closed his desktop.

My favorite things about this note are the generous amount of time I have to accommodate his request and his earnest statements about how he'll interact with our iTunes account. Unfortunately, as we over the weekend received a call from a for-profit university specializing in Gaming because Jack had given them all our family information whilst online ("But Mom, I thought they would just share some information with me"), I do not yet think he's ready for iTunes access.

You should have heard the caller's voice when I said that Jack was but 8½. "Oh, I see. Yes ma'am, we'll take him off our call list right now."

It took my husband and me an hour to stop laughing.

This note, tightly-wrapped around some Legos for heft (the kid is a good engineer), was thrown down the stairs to me last night after a slight, shall we say, tantrum after my suggesting that because he'd already had two dinners, he really didn't need another. 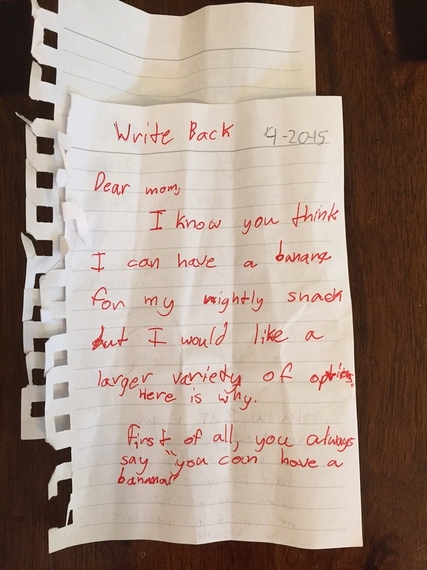 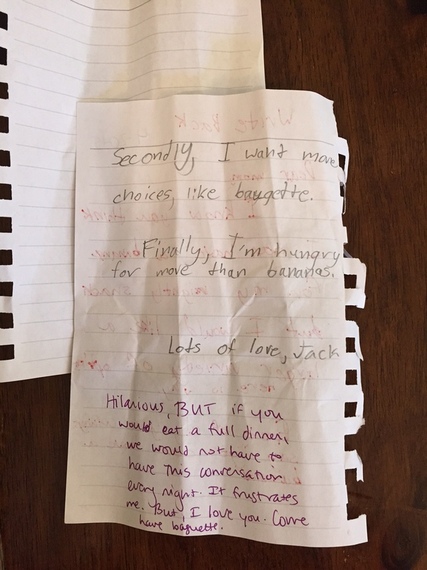 This note is less skillfully composed, but he got the damn baguette -- plus dipping oil! -- so I guess it worked.

I spent another hour laughing about this treasure, which I intend to save forever along with the other thrown-down-the-stairs notes (his preferred tactic of reaching out because we have a rule that once we have done the final tuck-in, he's not allowed back downstairs).

More:
funny things kids writethe-playroomParentsthird gradeparents-moms
Newsletter Sign Up
Raise the kind of person you'd like to know
Subscribe to our parenting newsletter.
Successfully Subscribed!
Realness delivered to your inbox